It’s no surprise that House Democrats would vote to denigrate Tennessee conservative Christians who  love their country. But what does it say about the House Republicans who voted in agreement? 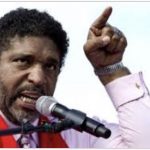 Not included in the resolution was Barber’s 2013 participation at the Tennessee Highlander Center meeting about how to resist what the assembled group described as the “extreme agenda” being pushed by Republicans.

The resolution failed; only 28 voted yes, 35 voted no, and 20 were either too confused, uninformed, or squeamish, and simply abstained.

Faison and Lamberth are part of the House leadership. 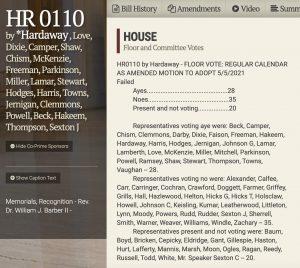 Before the vote, when Rep. Mark Cochran (R-Englewood) questioned what was meant specifically by the term “false moral narrative of Christian nationalism” sponsor Hardaway responded that “there is a Christian nationalism Dr. Barber observes some of those narratives as not being in line with his way of thinking” and why he developed his moral budget ad his moral agenda.

Based on the professors’ national survey questions and responses, “Christian nationalism” is a cultural framework used to refer to white Christians, particularly evangelicals, who say that the U.S. was founded on Christianity and therefore must remain a Christian nation. The authors describe “Christian nationalism” as a form of Christianity “that isn’t just about religion, but is a racialized view of America which “‘includes assumptions of nativism, white supremacy, patriarchy and heteronormativity, along with divine sanction for authoritarian control and militarism’” which dominate the political views of the subset surveyed.

But, as they explain, Black Christians get a pass because blacks haven’t been in power and as such, their version of Christian nationalism is more progressive and about a nation that has never lived up to its professing Christian identity.

The two sociologists claim that their national survey results show that people high on the Christian nationalism rating scale tend to be much more opposed to gun control, are much more xenophobic or racist and define being an American as being white and Christian. Worse still, the white version of Christian nationalism is “connected [to] and it connects all these negative ideologies.”

As used by Barber, Christian nationalism is white and its supremacist. Some of Barber’s examples of the “false moral narrative of Christian nationalism” is exemplified by Franklin Graham and Jerry Falwell who don’t “promote the faith from the biblical foundations of love, truth and justice.” Instead, they are part of the “unholy connection” where “[r]eligion is being used as the cover for greed. The term ‘‘evangelical’’ has been hijacked in favor of corporate interests.”

What’s obvious is that Barber’s five “interlocking injustices” that form the basis of his moral budget and moral agenda align perfectly with the Movement 4 Black Lives (M4BL) policy platform and the agenda of BLM.

Barber’s speech at the 2018 anti-Israel U.S. Campaign for Palestinian Rights (USCPR) national conference affirmed his view that Israel is an apartheid state and that “historically, it is important for us to remember that one path regarding the Zionism project in Palestine was a colonialist project from the beginning…[i]t was  never just purely about righting the terrible wrongs of the Holocaust. But for [Britain’s great colonialist] it was about expanding a global empire.”

Not surprisingly, Barber’s comments align with the whole Christian nationalism narrative which is primarily directed at evangelical Christians who tend to be committed advocates for Israel. It also aligns perfectly with both the M4BL and BLM anti-Israel positions and their promotion of the anti-Israel Boycott, Divestment & Sanctions (BDS) campaign.

By no coincidence, the USCPR has endorsed M4BL’s policy platforms.

William J. Barber II reveals what he really means when he uses the slur of Christian nationalism came at the close of his speech:

“In this moment when Trumpvangelicals have linked up with Zionist extremists and the corporate facism of white nationalists around the world, it may seem like [the USCPR’s] goal of Palestinian rights is at a low point….The same corporate interests that used white nationalism to put Trump in the White House, and leaned into Zionist extremism to move the U.S. Embassy to Tel Aviv, also want to cut taxes for corporations, deregulate, ignore climate science, take away healthcare, deny living wages, cut the social safety net and give more and more money to the U,S. military. But here’s the good news: There are far more of us than there are of them. And, God have mercy, even some of them have joined us when we’ve come together in truth and love and mercy.”

And what about the Barber5 Republicans who voted to honor Barber? 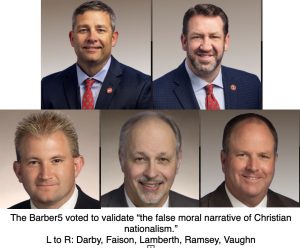 Rep. Tandy Darby – he’s new and his vote raises questions about him that will require monitoring.

Rep. William Lamberth – at best, his vote is confusing; contact him and ask him to explain – rep.william.lamberth@capitol.tn.gov

The sociologists who defined Christian nationalism say that white Americans who adhere to this ideology, see it almost as an ethnic identity with others who share their cultural values and who “look like them.”

“There are those and I’m among them who feel systemic racism is real. As an example of how our system has allowed one group of people see as superior and one inferior. I’m a member of the Christian church like many of you but I remember growing up and when I looked at God he didn’t look like me and I think that some people interpreted that as they were better because they looked like God and some people who looked like me did not. I think this should be cleared up by history, by standards, by what we teach.”

The Barber5 Republicans had already voted to ban the teaching of CRT in Tennessee public schools. How then did the Barber5 completely fail to understand that Barber’s Christian nationalism point of view is nothing more than camouflage for using the lens of CRT in all aspects of life?

1 thought on “Why Would TN House Republicans Vote to Denigrate Patriotic Conservative Christians?”