Looking back at the different Highlander Center directors explains plenty about the socialist training center’s evolution into a full-blown gathering headquarters for Marxists. These leaders are willing to “use any means necessary” to achieve “liberation.”

What does it tell you about the objectives when their idols are communists like Karl Marx and Angela Davis who recently quoted a fellow Marxist explaining that the BLM riots were “rehearsals for revolution.”

In the Southern states Marxists posing as social and racial justice warriors will be financed by the likes of George Soros and “liberal philanthropist” Susan Sandler.

Sandler has chosen to invest $200 million dollars targeted “to areas across the South and Southwest that are experiencing rapid demographic transformation” ie, from legal immigrants like refugees and illegal aliens.

Founding of the Highlander Center

Myles Horton co-founded the Highlander Folk School in 1932, and served as its first director. First located in Monteagle, Tennessee the school was shut down by the state. The school was renamed the Highlander Research and Education Center, moved to Knoxville and in 1971 made one last move to New Market, Tennessee where it is located today. The school’s founders modeled Highlander after socialist training centers they had visited in Denmark.

Horton believed that the Appalachian poor were being taken advantage of by the wealthy capitalist elites. Anti-capitalism and Horton’s experience helping labor to unionize and strike, expanded his ideas about “social justice” and his desire to create radical activists who would change the social, economic and political order of the South.

Horton served as Highlander’s director from its founding until 1969, during which time, prominent civil rights activists like Rosa Parks and Martin Luther King, Jr. received training at the Folk School. 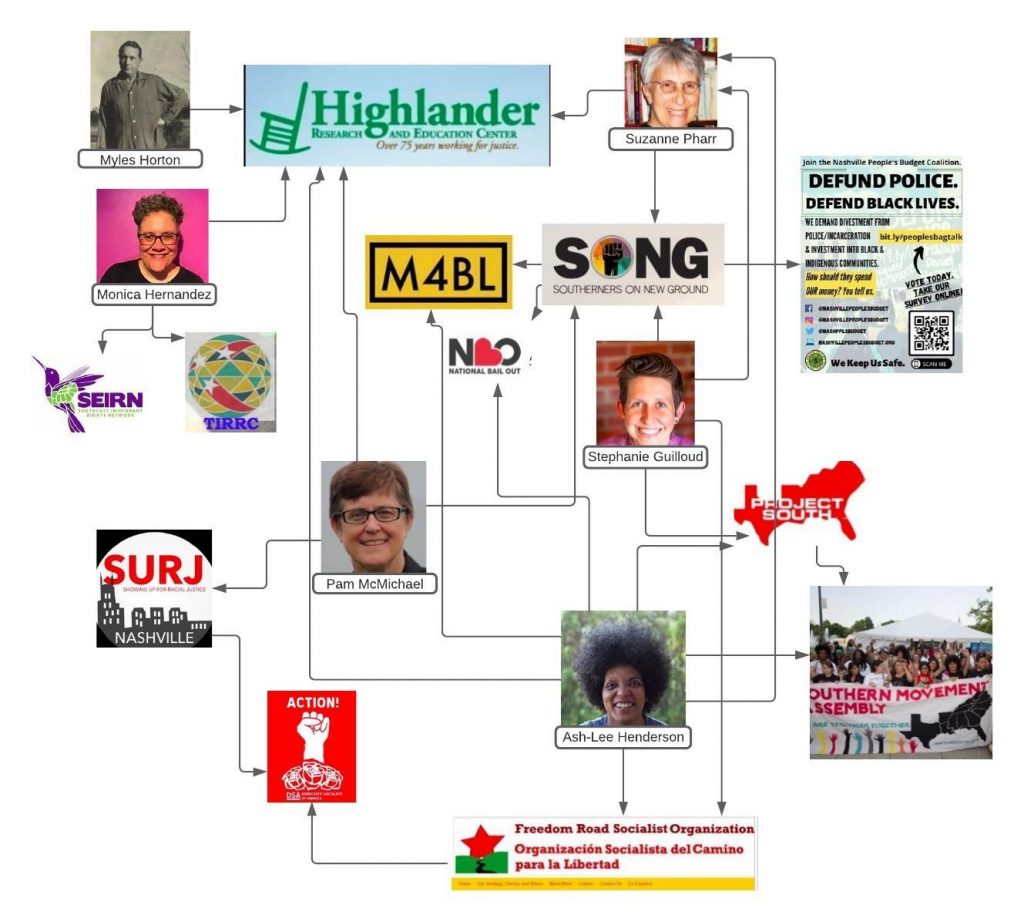 After Horton stepped down, there was a succession of directors over the next thirty years until 1999 when Suzanne Pharr took the helm; she served until 2004. A self-described feminist and anti-racist organizer, Pharr had already founded the Women’s Project in Arkansas.

Before leading Highlander, Pharr joined with several other black and white gay women and founded SONG – Southerners On New Ground.

SONG is a multi-racial queer organization which seeks to be “a home for LGBTQ liberation across all lines of race, class, abilities, age, culture, gender, and sexuality in the South.” They plan to “transform the region” through leadership development and organizing.

SONG, along with BLM Nashville, Workers Dignity (which advocates for the workplace rights of legal immigrants and illegal aliens), and several other groups, formed the Nashville People’s Budget Coalition, the group which aggressively pushed defunding the Nashville Police Department in support of defending black lives.

A former SONG board member, Stephanie Guilloud now serves as a co-director of Project South where Ash-Lee Henderson once served as a regional organizer. Ash-Lee continues her relationship with Project South through the Southern Movement Assembly.

Another co-founder of SONG, Pam McMichael served as Highlander’s director for twelve years, but before her, Monica Hernandez did a short stint leading the socialist training center.

Hernandez was very active at the Highlander Center for many years prior to serving as a director. For ten years, she was on Highlander’s staff working on immigrant issues. During this time she also served as the founding board president of the TN Immigrant & Refugee Rights Coalition (TIRRC). Since 2007, Highlander has been training TIRRC organizers. Hernandez now serves as the co-director for the Southeast Immigrant Rights Network and is a board member of the National Network for Immigrant & Refugee Rights.

Before leaving her position at Highlander, Pam McMichael helped found Standing Up For Racial Justice (SURJ), an organization committed to helping white people overcome the shame of their white privilege. Of course defunding the police and doing electoral work to “swing Georgia left” are critical parts of divesting whiteness.

SURJ lists chapters and affiliates across the U.S. including a SURJ chapter in Nashville, Memphis, Blount County and the Highlander Center where SURJ conducts its retreats.

SURJ and the Democratic Socialists of America have worked closely in campaigns including pushing for Nashville’s anti-police community oversight board.

It should come as no surprise that SURJ-Nashville’s founding steering committee co-chair Marie Campbell is the Asst. Director of Education at the Scarritt Bennett Center, a social justice education center in Nashville, and a Vanderbilt Divinity School graduate.

Allyn is also a graduate of Vanderbilt’s Divinity School and was also an educator at Scarritt Bennett.

Ash-Lee’s radical Marxist pedigree was detailed in Part 1 of the Highlander series.

Today’s Highlander Center is led by board members and chosen leaders who openly affiliate with the Marxist Freedom Road aka “Liberation Road” whose overriding goal is to destroy the Republican Party and then work with groups like the Communist Party USA, Democrat Socialists of America and a “mass of independent political organizations (IPOs) to defeat what they call the “New Confederacy.”

These Marxists say the “New Confederacy which like the first confederacy, is rooted in the most reactionary, racist, imperialist and anti-democratic forces in the country.”

Ash-Lee and Allyn describe Highlander’s perspective of the South this way:

“We recognize white supremacy, capitalism, imperialism, and colonization as harmful systems that are designed to oppress and divide our communities for the sake of hoarding and maintaining power for the white, wealthy elite.”

And they are actively working their plan to bring down what they believe is our oppressive government and replace it with a communist China-styled dystopia.