Part 1 of the Highlander series provided details about Highlander co-director Ash-Lee Henderson’s connectedness to Liberation Road, one of the two pro-China communist organizations operating in the U.S..

In 2016, Liberation Road restated its solidarity with “Black activists, protesters, organizers, and communities in the fight for Black Lives” and “the unleashing of Black rage and Black hope, the forging of Black organizations and the nourishing of Black leadership.”

Freedom Road Socialist Organization (FRSO) is the other U.S.-based pro-China communist organization. In 2019, FRSO split into two groups; one group renamed itself Liberation Road and is heavily focused on electoral politics and the community organizing that goes along with it.

Liberation Road is “strong” in Tennessee, and “works closely with the Communist Party USA, Democratic Socialists of America, Solidarity, League of Revolutionaries for a New America, Socialist Party USA, and sometimes the Workers World Party.”

Ash-Lee is also a member of the M4BL policy table leadership team. Launched in 2014, M4BL is a revolutionary-focused umbrella group of Black organizations whose agenda includes “Black Power Rising,” a massive redistribution of wealth and abolishing the electoral college.

Ash-Lee’s comrade-in-arms Alicia Garza, a trained Marxist and co-founder of BLM, also takes credit for helping to create the M4BL.

M4BL’s website states unequivocally, that “We are anti-capitalist: We believe and understand that Black people will never achieve liberation under the current global racialized capitalist system.” 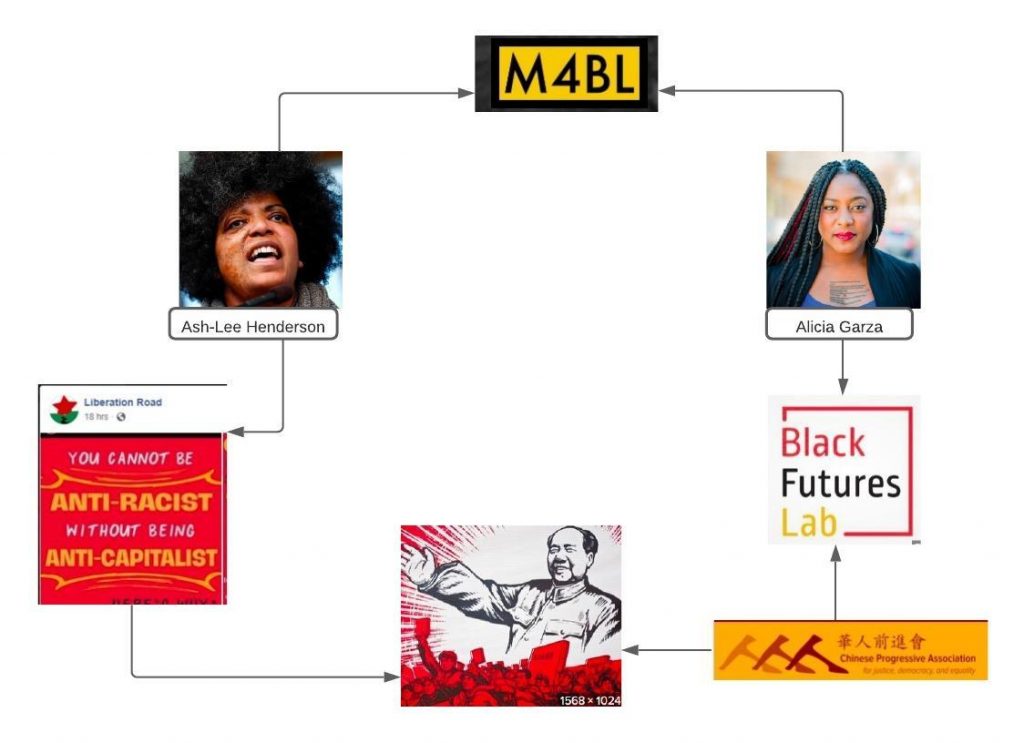 The Heritage Foundation states that the CSA has, from its founding in 1972 in San Francisco, been a “promoter” of China’s communist government. “‘According to an authoritative 2009 Stanford University paper tracing its early days to the present, and which can be found on marxist.org, the CPA began as a Leftist, pro-People’s Republic of China organization, promoting awareness of mainland China’s revolutionary thought and workers’ rights, and dedicated to self-determination, community control, and ‘serving the people.’”

Both the San Francisco CPA and the Boston CPA voiced support for BLM here and here, and their own grievance against perceived police brutality and use of excessive force.

CPA’s Boston chapter partners with the Chinese consulate. In 2010, the Boston CPA showed their support for the takeover of China by its communist party by raising the Chinese Communist Party’s flag over Boston’s City Hall. Ayanna Pressley, then a member of the city council, was present. She is now a member of the “squad” in Congress.

Ash-Lee Henderson’s “strong” organization, Liberation Road, notes that a communist-led revolution includes “overthrow of the capitalist state” and that “our thinking on these stages is drawn” from Lenin and “Mao’s discussion of the origins of the Chinese communist party.”

The Highlander Center which Ash-Lee co-directs, fiscally sponsors PowerU, an organization whose “principles of unity” says that “the systems of White Supremacy, Capitalism, and Heteropatriarchy  are the roots of oppression in our society,” mimicking the M4BL’s policy platforms.

In July, Garza and Ash-Lee were featured at a Harvard Kennedy School Summer Teach-In along with Jessica Byrd who is also a M4BL activist. This teach-in was intended to help draw students, faculty, and community members to support the radical goals of Garza and Ash-Lee’s movement.

Garza tweeted out her excitement about this event to her “fam @JessicaLByrd and Ash-Lee Henderson!” 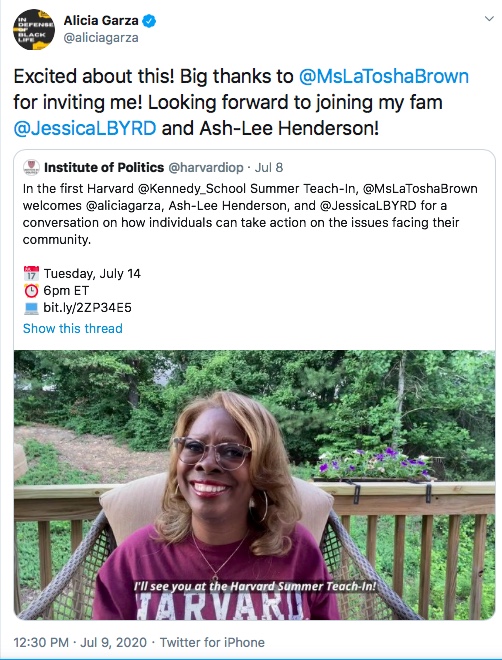 Ash-Lee and Garza appear to have a close personal and ideological relationship. They are Marxists who abuse the idea of “social justice” to try and topple the horrible capitalist America which ironically, has provided the millions in grant money funneled to their organizations.

Ash-Lee’s anti-capitalist venom even extends to other Black people.

She says that they have people who are “really ready to throw down” and that now’s the time to take action against “the violence of white supremacy, the violence of capitalism, the violence of militarized forces in our communities that are terrorizing people…”

The Daily Signal reported that in 2015, Garza “told an important gathering of global Marxists, ‘It’s not possible for a world to emerge where black lives matter if it’s under capitalism, and it’s not possible to abolish capitalism without a struggle against national oppression.’”

The Highlander Center is the foremost and oldest social activist training center in the U.S. Under the leadership of Ash-Lee Henderson, it is a hub for boots-on-the-ground agitators and their organizations, and teaches young and old the basics of Marxist/Maoist community organizing skills.

The people of Tennessee, as well as those in other states who want a free market, Constitutional Republic, need to wake up and realize that the Highlander Center is dedicated to insurrection against our government.

What, if anything, will be done about this treasonous organization and its supporters?

1 thought on “Tennessee’s Highlander Center: A Home for the Chinese Communist Party? Part 5”