Not a shocker that NO Tennessee state House Democrats voted to support the bill against the antisemitic boycott of Israeli businesses with whom Tennessee does millions of dollars of trade. But Democrats were doing what they always do – walk in lockstep with their leaders in D.C. and supporting the Biden administration’s real push on Israel. And if there is any question about where the Democrats stand on Israel, both the Iran nuclear deal and the Biden blaming Israel for his policy on Ukraine, the veil is lifted on Biden’s long-known hatred of all things Jews and Israel/

But when it comes to parent rights in Tennessee, we are starting to see that Tennessee’s GOP, many of whom like to wave their allegedly conservative principles, sidled over to the Democrats’ overt disrespect for parents’ relationship with their own children. Never forget that it is Biden’s Justice Department that labelled parents concerned with their children’s education, “domestic terrorists“.

The Tennessee House vote for and against Israel

On Monday in Tennessee’s General Assembly, Rep. Ryan Williams presented his Israel anti-boycott bill on the House floor. Two Democrats abstained and the rest voted NO. All Republicans who were present voted to pass the bill. Earlier in the Senate, Democrat Heidi Campbell whose district includes a large swath of Jews, voted against the bill.

It’s no secret that the DNC platform is anti-Israel so it should be no surprise that the Biden administration is following it.

Biden’s ambassador to Israel, Thomas Nides, Obama’s former deputy secretary of state, has confirmed that he doesn’t believe Jews should live in Jerusalem, is against Jews living in Judea and Samaria an area of Israel he has refused to visit just like his refusal to view the tunnels used by Hamas terrorists to murder Israeli civilians. Nides insists on calling the Islamic terrorist “pay to slay” program as “martyr” payments which just happens to violate the U.S. Taylor Force law. Then there is the desire of the Biden administration to reopen the U.S. Palestinian consulate in Jerusalem.

On this last point, early last year, Sen. Bill Hagerty introduced a bill which passed the Senate, that would keep Israel’s capital city Jerusalem from being divided by the Biden administration’s push for a Palestinian consulate which has been vigorously opposed by Israel’s government. According to Hagerty, Biden’s plan, violates the U.S. “Jerusalem Embassy Act of 1995”, which his bill upholds and which passed the Senate. Senate Republicans continue to fight Biden’s antagonistic Secretary of State Anthony Blinken who wants to reopen the Palestinian consulate in the western part of Jerusalem, deliberately infringing on Israeli sovereignty and deliberately attempting to redivide Israel’s capital.

Add to this that the U.S. State Department has announced a grant which will reward $1 million of taxpayer money for anti-Israel NGOs to report alleged human rights abuses by Israel. Forget China, Cuba, Russia, Iran, shari adherent countries, and Biden’s other favored Marxist friends.

Biden and those who speak for him or rather, work to excuse whatever comes out of his mouth, only serve to prove that his anti-Israel/anti-Jew animus is real. There simply is no way to justify his and the DNC’s alliance with aggressive Jew haters like Linda Sarsour (who btw, is also embraced by the Tennessee AMAC), and Al Sharpton. 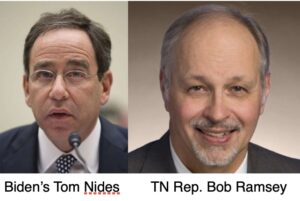 On Tuesday, the House Health Subcommittee chaired by one of the worst legislators the GOP has to offer, in a show of collegial disrespect, refused to allow Rep. Terri Lynn Weaver to present her bill on parental rights to the subcommittee.

Rep. David Byrd (R-Waynesboro), offered a motion to hear the bill while not a single Republican would provide a “second” to allow Rep. Weaver to present her bill. Demonstrating the epitome of cancelling the voice of their legislator colleague and Tennessee parents, not a single other Republican spoke up. Of course, the lone Democrat on the subcommittee did what was expected of him and remained silent as well.

Proving once again his “worst GOP legislator” bona fides, subcommittee chairman Bob Ramsey ignored the fact that it is not against the rules for the chair to “second” the motion and allow the bill to be heard.

Except for Rep. Byrd, this offensive move by the subcommittee members is too obvious in its intent to be ignored. None of these cowards want to record a NO vote against parents and probably hoped that it would go unnoticed. That is how stupid they think Tennessee voters are.

Well, Rep. Weaver who is among the minority of clear-headed and conservatively principled serving legislators and she is not quietly going along with what she described as the “feckless men” (ie, careless and irresponsible) on the subcommittee.

As reported by the TNStar,, Weaver said that her bill “was the same in principle to one that Florida Governor Ron DeSantis passed in 2021.”

“Florida’s HB 241 included legislative findings that it is a fundamental right of parents to direct the upbringing, education and care of the minor children and that important information relating to their minor child’s health, well-being and education while in the custody of the school district should not be withheld from the parent.”

Weaver’s bill is even more critical for Tennessee given that despite a law passed last year by the legislature, CRT is still being taught in Tennessee schools.

It’s no surprise that Bill Lee and his milquetoast administration made it known that they were opposed to the bill.

Any wonder conservative transplants to Tennessee are shocked when they discover that the conservative grassroots base is actually only reflected in a teeny-tiny minority in the General Assembly and entirely absent in the governor’s office?

One of the “feckless men” of the subcommittee Bob Ramsey, has a primary challenger. We don’t know Bryan Richey, but on paper he sounds good and the fact is, that parents in his district who care about their kids can’t possibly do worse than Bob Ramsey. If Ramsey manages to hide his long record of gross missteps and grosser voting record from his district and is sent back to Nashville, he should not be rewarded with chairing any subcommittee or committee; let Speaker Sexton know how you feel.

If conservatives in Tennessee want to take back the GOP, they had better start letting their representatives know what they think.

Messages of support to Rep. Weaver can be sent to rep.terri.lynn.weaver@capitol.tn.gov

Messages to Speaker Sexton can be sent to speaker.cameron.sexton@capitol.tn.gov