As we continue to inform the voters of Coffee County TN about who is currently campaigning for various offices, another candidate is Joshua Morris who is vying for the Coffee County Circuit Court Clerk position.

Mr. Morris announced his candidacy for this position by stating in part :“The Circuit Court Clerk collects all fines, court costs, and litigation taxes for the Court system.  My previous experience in this office gives me direct knowledge of the importance of accounting for this money properly.  In addition, I am aware of the many agencies and offices that the Circuit Court Clerk corresponds with regularly and the need to communicate with them effectively.” ( Note: previous experience was as Deputy clerk)

Well Mr. Morris, perhaps you can explain the issues you had with maintaining a budget while the Director of Recreation in the city of Manchester. According to a memo sent (see below) to Morris from then Mayor Betty Superstein in July of 2008 she stated “It was brought to my attention that the recreation center was seriously over budget for fiscal year 2007-2008. Ms. Esther Greene and I met with you on May 27 2008 to discuss the budget. You were instructed to stop all spending except for emergencies. This did not happen.”

In addition to the lack of maintaining a budget despite an order from the mayor directing Mr. Morris to do so, the same memo also shows the disrespect to superiors by Mr. Morris. When asked why he did not attend a department head meeting, Mr. Morris responded he was “too busy”. 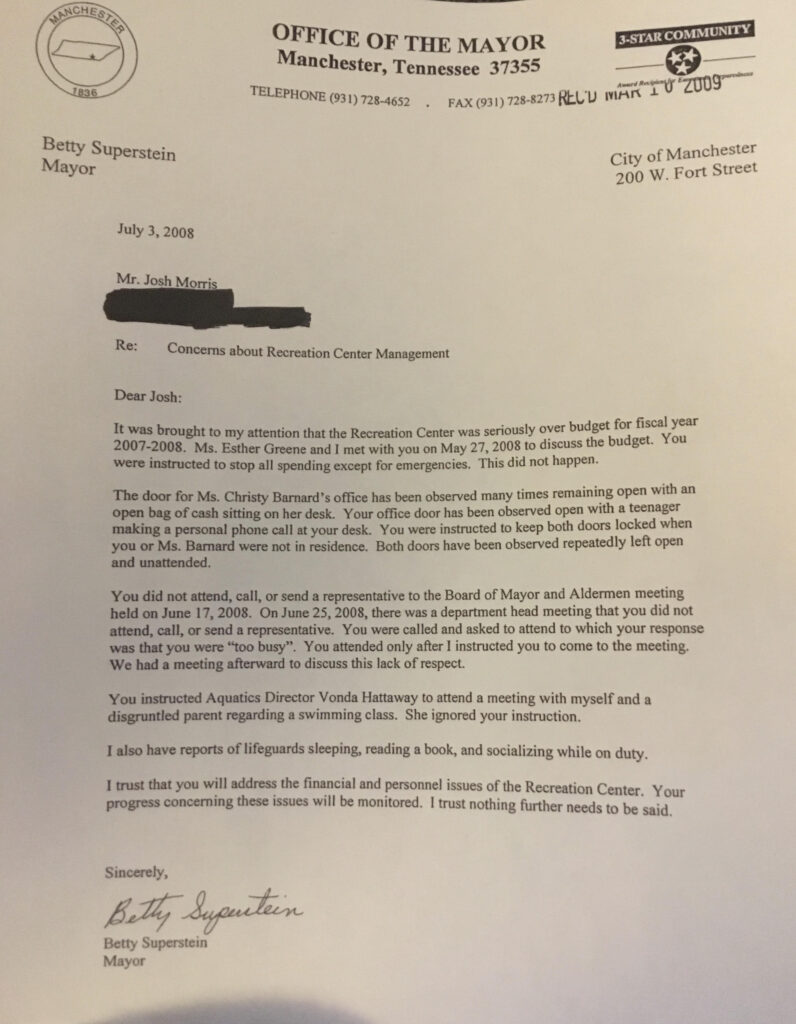 How is it taxpaying voters should trust Josh Morris to be responsible, accountable and diligent to handle money, when 2 years earlier he was reprimanded by the Mayor of Manchester for seriously going over the budget, and then disregarding the directive not to spend anymore unless for an emergency. If Mr. Morris had no problem disrespecting then mayor Superstein, will his arrogance enable him to do the same if he becomes the Circuit court clerk?

Apparently, the voters of Coffee County aren’t important to Mr. Morris either. On February 24th, the Republican Party of Coffee County, which Mr. Morris claims to be a part of, hosted a meet and greet dinner where candidates were present to promote themselves. Mr. Morris did not attend. Mr. Morris did however attend a supposedly public function hosted by a friend at the exclusive Clayton Terminal at the Tullahoma Airport on March 3.

Yes, Josh Morris may fit the criteria for being a “bona fide” republican based on his voting record, but unfortunately the criteria in TN State GOP Bylaws does not account for character, or loyalty to the Republican party at all. So much for the “integrity” of the party, as clearly Mr. Morris likes to vote for the person, not necessarily the party.

Wake up Coffee County voters, stop electing those who have an agenda or are just part of the rhino system.