The United States Commission on Civil Rights has stated, that “anti-Semitic bigotry is no less morally deplorable when camouflaged as anti-Israelism or anti-Zionism.”

The anti-Israel BDS campaign attacks Zionism, the movement that helped to establish the State of Israel.  Martin Luther King Jr., often cited by progressives as a symbol for social justice, understood that anti-Zionism is anti-Semitism. As he said, “When people criticize Zionist, they mean Jews. You are talking anti-Semitism.”

BDSers want to eliminate the democratic state of the Jewish people.   For this reason, rallying BDS’ers use chants like “from the river to the sea Palestine will be free” which means there would be no Israel or Jews between the Jordan River and Mediterranean. The Jew-hating BDS campaign against Israel is, without question, the new anti-Semitism.

Cullors’ anti-Jew wokeness was ignited after joining a 2014 junket to the West Bank led by Ahmad Abuznaid, a Palestinian-American who has convinced black Americans who hate both the police and the U.S., that their grievances align with Palestinians who hate Israel and its Jews.

Ash-Lee started her anti-Jew campaign in 2014, in Chattanooga when she was an organizer with Concerned Citizens for Justice, a self-identified black liberation organization whose goal was to end white supremacy in Chattanooga.

In December 2016, shortly before being named co-director of the Highlander Center Ash-Lee Henderson took a solidarity trip to what she described as “occupied” Palestine. “Going through checkpoints, seeing rubber bullets, reminds us what our comrades and some of us experienced in Ferguson, [and] IDF soldiers totally remind me of the cops that brutalized [me].”

According to Ash-Lee one of the trip’s highlights was spending time with the Afro-Palestinian, admitted terrorist Ali Jiddah, a former member of the radical Popular Front for the Liberation of Palestine. The man she lauded as the “elder of the African village in Jerusalem’s Old City” was imprisoned in Israel for 17 years after planting four hand grenades which injured multiple people. He was released from prison as part of a prisoner swap and in a later interview, admitted to his crime.

Typical of radical leftists’ fake wokeness, Cullors and Ash-Lee ignore the fact that Palestinians still use the Arabic slur “abeed” (slave) to refer to Afro-Palestinians like Jiddah.

The same year Ash-Lee became anti-Jew woke, she received a formal promotion to the policy table leadership team of the Movement 4 Black Lives (M4BL), the revolutionary umbrella group for black activist organizations including BLM. M4BL advances its own form of racism and its hate of America and white people through policy platforms including one titled “Invest-Divest,” the first version of which labelled Israel an apartheid state.

After unexpected push-back, M4BL tried to conceal its lies about Israel by moving all anti-Israel language to a white paper titled “Cut Military Expenditures” now linked to the M4BL policy platform on invest-divest which claims that Israel is an apartheid state, is “complicit in the genocide taking place against the Palestinian people”, that homes of Palestinians and land “are routinely bulldozed to make way for illegal Israeli settlements”,  and that “Israeli soldiers also regularly arrest and detain Palestinians as young as 4 years old without due process. Everyday, Palestinians are forced to walk through military checkpoints along the US funded apartheid wall.”

Of course there is no mention that Israel’s security wall has decreased deaths from suicide bombers.

Ash-Lee has joined with other anti-Jew groups like Friends of Sabeel North America (FOSNA) which opposes Christian Zionism and pushes the BDS campaign in U.S. churches. She has also joined forces with Ahmad Abuznaid to keep pushing their anti-Israel vitriol. 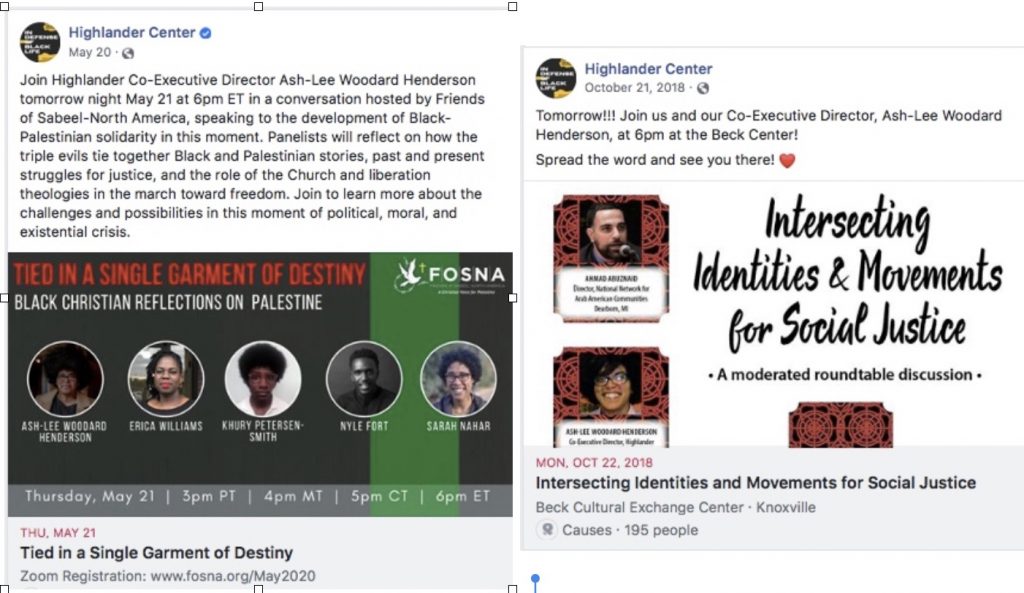 Ash-Lee has also adopted BDSer’s favorite death-to-Israel slogan – “from the river to the sea…” and wearing the black and white keffiyah popularized by the “father of modern terrorism”, Yasser Arafat. 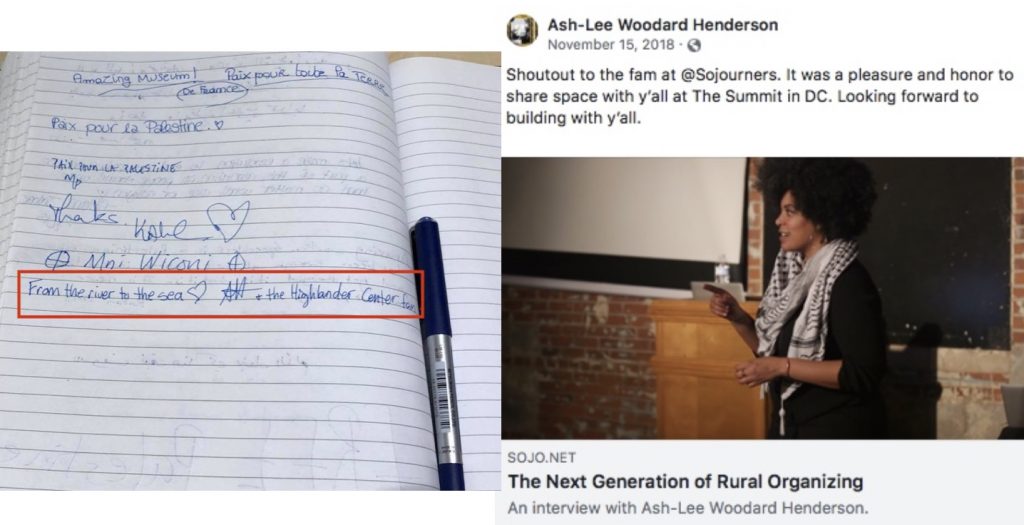 Founding board member of Tennessee’s American Muslim Advisory Council (AMAC) Drost Kokoye, was among the first Islamists to openly support the BDS campaign. It wasn’t long before AMAC featured Linda Sarsour, among the most vocal anti-Semites in the U.S., at an AMAC event. This was followed by then AMAC chair Zulfat Suara, publicly embracing Jew-haters Ilhan Omar and Rashida Tlaib.

Sarsour says she has been “deeply involved” in the BLM movement and was heavily praised by BLM co-founder Alicia Garza in a recent virtual interview. Recall, that Ash-Lee and Garza have a particularly close relationship. 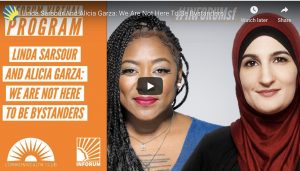 Ash-Lee and Linda Sarsour serve together on the advisory board of the Philanthropic Initiative for Racial Equity an organization pushing to move more foundation funding to groups led by “people of color.”

In 2019, BLM’s Cullors was named the Executive Director and Board President of the BLM Global Network Foundation. Cullors now sits on the multi-million dollar BLM war chest and is the media go-to person to speak for BLM. Cullors has doubled down on BLM’s embrace of the BDS campaign – “[w]e realized we [BLM activists] needed to take our solidarity [with the BDS campaign] a step further. We had to be more public.”

Three Jew-haters with access to bottomless BIG money – what could go wrong?