Six days after Tennessee’s two Senators voted to certify the electoral college votes, One America News questioned why the Democrats were being allowed to divert attention away from the “mounting” evidence of election fraud, including a number of the easiest to question:

These and many more election irregularities such as those related to absentee ballots are catalogued in the three-part Navarro report which concludes that “[t]here was no single ‘silver bullet’ that allegedly won the election for Biden; instead it was ‘death by a thousand irregularities’ in any given battleground state; and, most importantly with respect to the question as to whether the election may well have been stolen, the narrow alleged Biden ‘victory’ margins in each of the six battleground states were dwarfed by the number of potentially illegal ballots.” 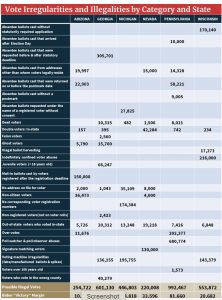 On January 2, four days before the electoral college votes reached Congress, Hagerty and Blackburn surprised Tennesseans with a strong, forthright commitment to object to certifying the electoral vote:

“Tennesseans elected us as their United States Senators to represent their views and values in Washington and to always fight for them, which is why we have concluded without any reservation that we will stand against tainted electoral results from the recent Presidential election. We know that our elections, built around the Electoral College which is a fundamental element, are the envy of the world. Protecting their integrity and ensuring the results are free and fair are critical to maintaining the trust of our own citizens. Since November 3, hardworking men and women from across Tennessee have contacted us to justifiably express anger and concern that some states conducted the recent election in a manner that did not respect the rule of law and may have violated many of their state constitutions as well as Article II of the U.S. Constitution. Many are concerned about the sanctity of the one person one vote guarantee. Our founders understood that it is ultimately the people’s job to preserve the sanctity of these most fundamental American systems, and so they charged the people’s representatives in Congress with a specific role in the process. We plan to exercise that role fully in the new Congress.” — Senator Marsha Blackburn and Senator-elect Bill Hagerty

Big bold words which Hagerty and Blackburn ditched after the Antifa riot as if somehow it justified their back-pedaling. The feckless and insincere Benedict Arnolds reversed course, voted to certify what they previously claimed were “tainted electoral results” and hand the country over to the tyranny of a Biden-Harris-Pelosi-Schumer administration.

Unlike the intelligent and principled Sen. Josh Hawley from Missouri, Hagerty and Blackburn showed how little respect they have for legal voters in Tennessee – including the ones who have given them the privilege of serving in the U.S. Senate. They’ve shown Tennesseans how quickly and easily they will concede and have yet to explain how or why they now believe that election fraud is acceptable.

Even if one believes that the responsibility to address the electoral shenanigans rests with state legislatures, members of Congress have the statutory option and the representative duty, to question, debate, and if necessary, object to electoral outcomes.

Once the Capitol was secured and the electoral vote count resumed, Hawley continued explaining his objection to Pennsylvania and the “unprecedented interference of the Big Tech corporations in this election in favor of the Biden campaign, not just in Pennsylvania but everywhere.” Hawley’s wife and child had been threatened in their home by protestors the night before Congress’ counting of the electoral votes. Hawley refused to be intimidated either by the harassment of his family or the pathetic “riot” at the Capitol – he moved forward offering making his statement of objection because he refuses to “bow to a lawless mob.”

Hagerty used President Trump’s endorsement to fool the uninformed voter and when the going got tough on January 6th, Hagerty showed Tennesseans that he is neither loyal to the one that brung him to the dance and that he is sufficiently arrogant to take voters for granted.

Blackburn’s betrayal is the best evidence that she has been in D.C. waaaaaay too long!

Both have impugned their credibility and indelibly proved they can’t be trusted – as if they ever could. It remains to be seen whether Hagerty’s new fixer-smoother-over Jim Henry, a long-standing Republican political insider, can gloss over the fact that Hagerty has always been an Establishment RINO.

Let’s see how creatively Hagerty and Blackburn explain selling-out Republicans in Tennessee – that is, if they ever bother to explain themselves. It also remains to be seen the effect these sell-outs have on the Tennessee GOP.