The panel of speakers, hosted by Nashville Jewish community suggested you are a white supremacist if you oppose illegal immigration, BLM and Antifa violence, support the idea that all lives matter, and/or support former Pres. Donald Trump.

Spitalnick’s allegedly “non-partisan” group IFA, is backing a lawsuit that uses conspiracy theory law to sue individuals described as white supremacists, neo-Nazi anti-Semites and members of hate groups” involved in the Charlottesville “Unite the Right” 2017 rally. The lawsuit intends to shut down and deter hate group activity by “dismantling and bankrupting these groups and their leaders.”

Assuming the lawsuit results in monetary judgments, Spitalnick says they will destroy these people financially and “for the rest of our defendants lives we will be following them around to collect [the judgements]” by putting liens on their homes, garnishing their wages and seizing any other assets they own, as a way of deterring future white supremacy driven violence.

Throughout her presentation, Spitalnick, a former advisor and spokesperson for NYC Mayor bill deBlasio, draws parallels between Charlottesville’s lawsuit defendants and the “insurrectionists” at the Capitol riot on January 6th. She explains that white supremacy, anti-Semitism and racism, emanate from what she calls White Replacement Ideology – the fear by the white supremacist that their dominance will be replaced by minority groups in the U.S. is  being threatened. Spitalnick considers white supremacy to be a problem of crisis proportions, endemic to the mainstream right which uses “far right social media site Gab,” to communicate.

Spitalnick lists “horrific attacks” including the shootings at Poway synagogue in San Diego, the Tree of Life synagogue in Pittsburgh and the mosque shooting in New Zealand, as examples of the violence she attributes to “white race replacement ideology” beginning at minute 37:00:

“our fates are so intrinsically intertwined here in that you can’t take on white supremacy without taking on islamophobia. You can’t take on white supremacy without taking on anti-semitism. You can’t take on racism without taking on any of these other forms of hate.  And I mentioned earlier [white] replacement theory which is the ideology that motivates so much of this extremism that we’ve seen.  This is something that percolates to the surface when you see horrific attacks like the ones I mentioned.  It sort of manifests in this very explicit form where you hear them chanting things like Jews will not replace us. This is the idea that jews are the puppet masters orchestrating the replacement of the white race, supporting Muslim Americans, supporting Black Americans and the Latinx community and the LGBTQ community and immigrants and refugees and anyone who doesn’t fit into the vile narrow vision for what these white supremacists want this country to be. So you see it in these very explicit and egregious terms when it happens in the form of those attacks but this is also an ideology that we see manifesting increasingly in the mainstream of the right in a variety of ways and so when you hear dog whistles like George Soros supporting the Black Lives Matter protests or supporting a caravan coming up through Central America or any of the other dog whistles that we hear from increasingly mainstream republicans and other leaders that is the same white supremacist ideology that ultimately culminates in the sorts of egregious violent attacks we’re talking about here.”

Spitalnick says this is a CRISIS! But it’s one that she claims the lawsuit can address, stopping hate and violence, without doing harm to Constitutionally protected speech. In reality, the First Amendment damage and censorship will be accomplished using strategies discussed in another virtual meeting discussed below which include financial bludgeoning, leaning on social media sites to continue de-platforming efforts and going after web hosting and domain registration companies to shut down sites groups on the left don’t like.

In other words, organized censorship.

IFA is reported to have raised over $10 million dollars to support the lawsuit which Spitalnick has said is “critical, especially because the government during the Trump administration has rolled back efforts to track and prevent white supremacist violence.” She states, “The infrastructure that’s meant to address this sort of thing has actively been dismantled.”

The week before Spitalnick’s event in Nashville

One week prior to the Nashville event, Spitalnick participated with representatives from the Anti-Defamation League (ADL) and the Southern Poverty Law Center in a virtual event titled, “White Supremacy and far-right extremism: is the Capitol siege the end of the beginning?”

These organizations actively work to censor dissenting voices. They are expanding this mission by using a broadbrushed label of white supremacist to effectively erase any and all opposition to their agenda.

When asked why certain groups like the Proud Boys and QAnon adherents were drawn to the January 6th Capitol event, the ADL’s director of its Center on Extremism said these groups see themselves as fighting against liberal forces “that seek their demise and threaten their existence” and that they “perceive Donald Trump as the embodiment of their savior, basically the warrior who’s going to help protect their future and their values.”

As to Christian groups? They peddle fear of the “End Times” and the end of western white Christian society.

Eric Ward from the SPLC claimed that their driving narrative was the stolen election.  He believes that the protesting groups wanted our system of democracy overthrown and an authoritarian ruler (his reference to Trump), installed in its place.

Spitalnick reiterates her script about white supremacy and violent extremism and that there “is a direct line that runs from Charlottesville through these other attacks to January 6th.” While she did not deny the hate, racism and anti-Semitism on the left, she was adamant that there is “no equivalency” between the far-right and the far-left extremists.

She believes that the CRISIS and greatest threat to our country is the far-right extremism.  The people who caused what she and leftists have labeled an “insurrection” came from the right and is in the mainstream right. Her “evidence” is a far left news report that members of the GOP caucus gave a standing ovation to Majorie Taylor Greene. In typical leftist fashion, Spitalnick deliberately omits, that as reported, the standing ovation by some members of the caucus came after Greene apologized for embracing the QAnon conspiracy theory and some of her other controversial remarks.

This group took more time to focus on the “weaponization of technology” that is, the role of social media enabling hate groups to indoctrinate and recruit adherents and spread their hate speech. Spitalnick has signaled repeatedly that social media is necessarily implicated in the IFA lawsuit and greater repression of speech on these platforms will be sought under the guise of accountability for enabling the spread of disinformation and enabling the spread of extremist violence.

Along with leaning on social media sites to de-platform groups and individuals they consider sources of hate, they discussed going after web hosting and domain registration companies to shut down the sites that those on the left don’t like.

Typical deception by leftists on the Nashville panel and more

While peddling the CRISIS theme and talk of right wing extremist hate and violence, the Nashville panelists blatantly ignore the hate, violence and wanton destruction on the left. Given that they were sponsored by virtually every Jewish group and congregation in Nashville, they hypocritically ignored the virulent anti-Semitism on the left from BLM, AMAC and the co-director of the Highlander Center who is also a leader in the Movement 4 Black Lives.

Sabina Mohyuddin, AMAC’s executive director and founding member, is a stunning example of leftist duplicity.  She claims that Muslims in America have been the real victims of 9-11 who have had to “endure” the hatred of white supremacy-driven Islamophobia (which  she labels anti-Muslim racism) for years.

Using the socialist “intersectionality theory of connecting groups in a common struggle, Mohyuddin says she can’t complain about Islamophobia unless she also speaks out “forcefully” against anti-Semitism and anti-black racism.  Struggle is a word she would know well as it is the definition of jihad in Arabic.

Mohyuddin’s organization, AMAC, had already signed onto “intersectionality” but made sure to conceal its anti-Semitism under the cover of anti-Zionism. In 2016, AMAC hosted an event with Linda Sarsour was the featured speaker.  Sarsour is among the country’s most vocal anti-Semites who refuses to say that Israel has a right to exist. She is also a leading proponent of the anti-Israel Boycott, Divestment & Sanction (BDS) movement, otherwise known as the new anti-Semitism because it is a driver of hatred and violence against Jews.

In 2018, AMAC sponsored a program titled “Linking Liberation Struggles” featuring their own vocal anti-Semite founder and board member, Drost Kokoye, and active BDS promoter, Highlander Center co-director, Ash-Lee Henderson. And for years, AMAC board members and leaders have had a close relationship with super Jew-hater Ilhan Omar. 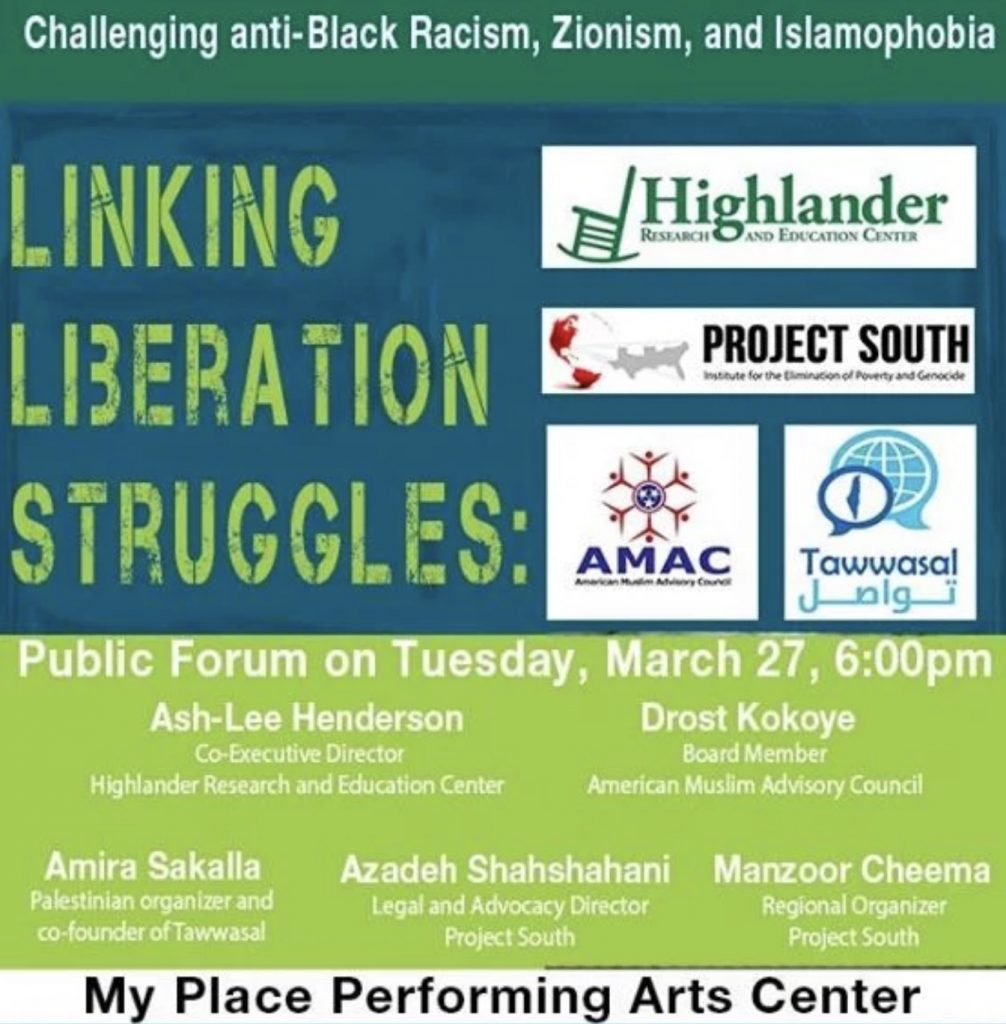 After slandering members of the Nashville community who write and speak about Political Islam, (basically the way political scientists objectively analyze how factors such as certain institutions and practices affect public life), Mohyuddin says she is anxious to go after “the players” she identified.

Amy Spitalnick began her tour of Nashville’s Trump-hating leftists with Samar Ali’s Millions of Conversations which ironically includes a pledge to listen to others with differing opinions. Spitalnick’s “Hate and Extremism” event with Samar Ali was billed as a way to move to a more “united America.” This is the same Samar Ali who helped get a Metro council candidate elected despite her public embrace of anti-Semites.

Her IFA-backed lawsuit is scheduled for a three week trial in beginning in October 2021.

So according to IFA and its supporters, you’re a white supremacist Islamophobe if you oppose illegal immigration or BLM rioters who attack street-side diners, or believe that all lives matter or that it’s a problem when Antifa mobsters burn down cities and physically attack police and bystanders. And you’re definitely a white supremacist, no matter what your color, if you voted for Trump.

Sponsors of the this event are listed in the even flyer. The director of the Nashville Jewish Federation, Eric Stillman can be reached at eric@jewishnashville.org 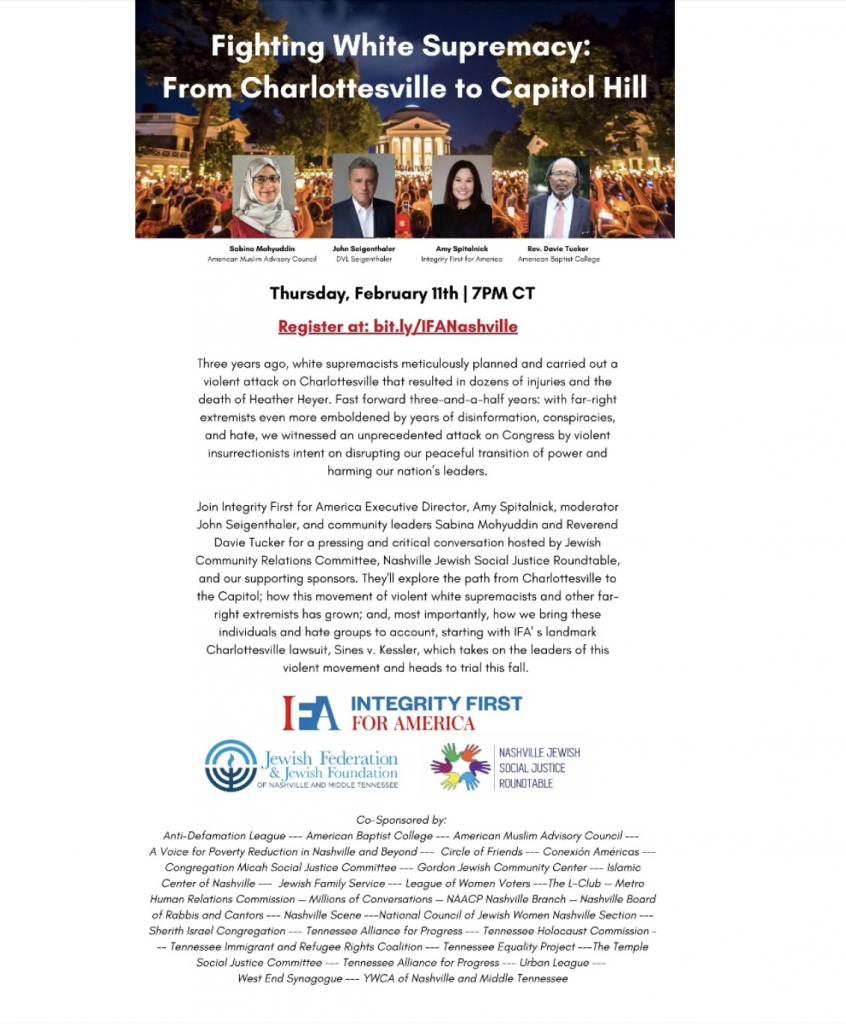