Nakba Day marches are now occurring across the country. ’Nakba’ is translated as “the catastrophe” and is what Palestinians label the reestablishment of the State of Israel. For anti-Israel agitators nakba day marks the supposed Zionist conspiracy to ethnically cleanse Palestine when the State of Israel was established. Not so; “[i]n reality, Nakba Day is a gross misrepresentation of history. The [Palestinian] refugees were created by the Arab Muslim desire to wage Jihad against the Jews.”

One anti-Israel protest march joined by the Nashville Peace & Justice Center (NPJC) was held in downtown Nashville on Wednesday, May 12; another organized by the Democratic Socialist of America was held in Knoxville on Saturday the 15th, and another is scheduled in Nashville for Saturday, May 21st. This one is being organized under the Samidoun umbrella by students from MTSU; NPJC is promoting it as well. These protests are not the first to take place in Tennessee, they are simply getting larger.

In 2014, Marxist Ash-Lee Henderson’s intersectionally-based anti-Jew protest was held in Chattanooga when she was an organizer with Concerned Citizens for Justice, a self-identified black liberation organization. “’We recognize that there is total intersection between what is happening to the Palestinian community overseas and what has happened with apartheid and Jim Crow to people who identify as African-American,’” said Ash-Lee Henderson, an organizer with Concerned Citizens for Justice.”

At the same time, Drost Kokoye, a co-founder and board member of Tennessee’s AMAC (American Muslim Advisory Council), in collaboration with the NPJC, led an anti-Israel counter-protest across the barricade from a pro-Israel rally. 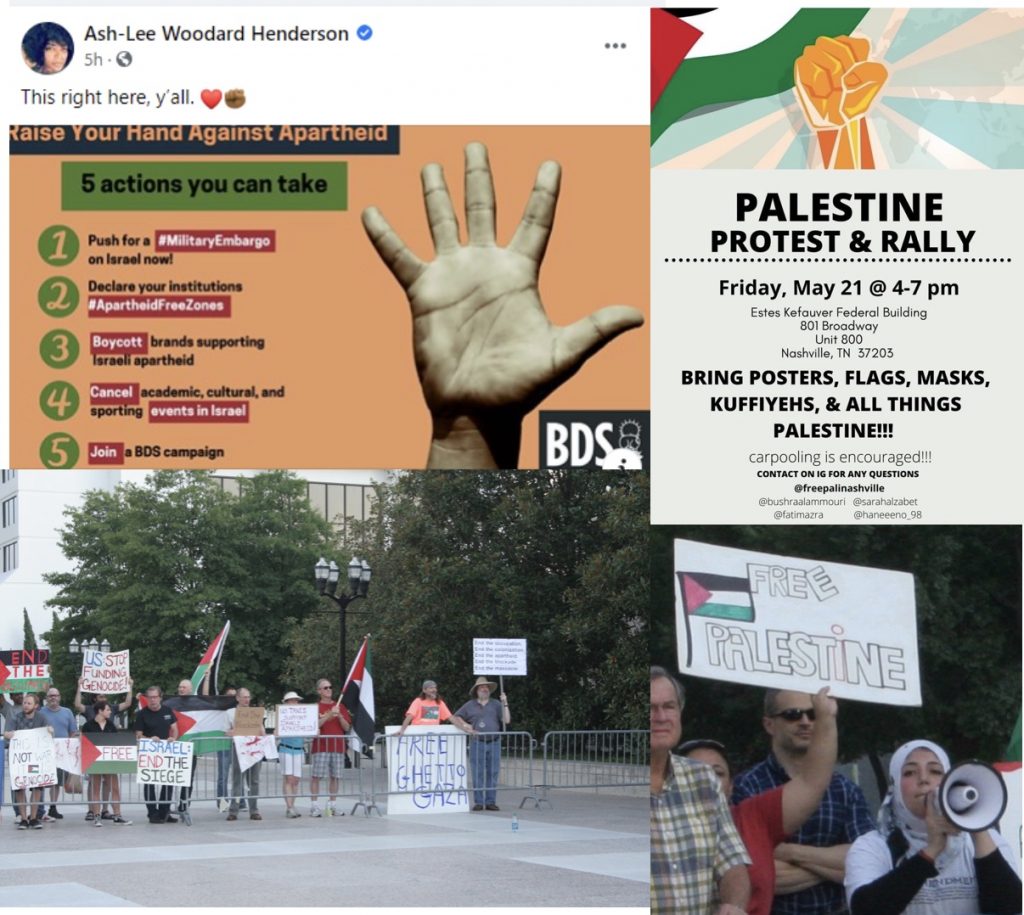 Daoud Abudiab, another co-founder of AMAC and its first chairman, is a fellow traveler of Israel haters. Trying hard to portray himself as an interfaither with the singular agenda of creating a positive impression of Muslims through his “Our Muslim Neighbor,” (a project of Religions for Peace USA, an organization itself tied to Muslim Brotherhood organizations), Abudiab launched his Faith and Culture Center in 2014. Then his Center joined Nashville’s leftist collective to strategize with the emerging local BLM chapter. That was the same year that BLM leaders traveled to “occupied Palestine” and publicly announced their support for the Boycott, Divestment & Sanctions (BDS) campaign against Israel.

Coming out of the closet in his own way, Abudiab joined the Muslim Brotherhood organizations at the inaugural USCMO conference the same year the USCMO issued its “Washington Declaration”, an initiative intended to unite a globalized Islamist political force. The USCMO was founded by every major U.S.-based Jew-hating organization including CAIR, AMP (BDS leader American Muslims for Palestine), MAS – the Muslim American Society whose founder admitted that his organization was founded by members of the Muslim Brotherhood.

Following his attendance at the USCMO conference, Abudiab amplified his anti-Israelism by choosing to support FOSNA’s (Friends of Sabeel North America) agenda. FOSNA attacks Christian Zionism, promotes the BDS campaign against Israel, and has teamed up with Black 4 Palestine to bring black churches and clergy into their Israel and Jew hate efforts.

FOSNA remains on the Anti-Defamation League’s top ten list of anti-Israel organizations in the U.S.

In 2015, Daoud Abudiab chose to speak at FOSNA’s 2015 conference which in the course of pretending to be focused on a “struggle for a just peace” offered a panel discussion on BDS, a key component of which is right of return for alleged Palestinian refugees.

Omar Barghouti, co-founder of the BDS campaign made it clear in 2010, and again, more recently, that the goal of BDS and return of alleged Palestinian refugees, is to eliminate Israel. He expressly rejects a two-state solution and says that a Palestinian right of return is the way to end Israel as a Jewish state.

Not long after joining up with FOSNA, Abudiab shared his Israel animus on facebook. He posted an article titled Court Says Israel Owns Jaffa House Because Arab Family Members Left in 1948, along with his comment – “injustice ignored is never forgotten. What goes around comes around one day!” 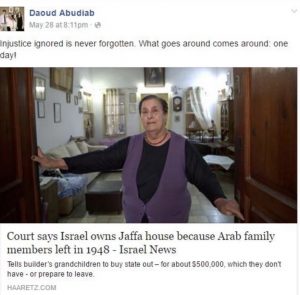 That day arrived this week based in part on the excuse of Israel’s Supreme Court preparing to hear an appeal in a dispute over four houses in the Sheik Jarrah neighborhood in Jerusalem. Much like the housing dispute case posted by Abudiab, the Sheik Jarrah cases are “not about forcing [Palestinian-Arab] families from their home. [Sheik Jarrah] involves a years-long process of owners suing tenants whose leases have expired, or in a few cases, suing squatters with no tenancy rights at all; the owners are simply asking for their rent to be paid.”

Neither the timing of the “religion of peace” Ramadan period nor the truth about the housing dispute stopped Hamas and Arabs unprovoked violence against Jews. Hamas fired over a thousand missiles and rockets into Jerusalem, Tel Aviv, Ashdod, Beersheba, Ashkelon, communities bordering on Gaza, killing Israeli citizens, wounding many others, destroying properties, setting the Trans-Israel pipeline on fire and terrorizing countless Israelis. On Monday, Hamas managed to kill 17 Palestinians with their own rockets falling short and landing in Gaza.

Along with the unprovoked missile attacks there was an escalation in Arab pogroms in Jerusalem, Lod, Jaffa, Bat Yam, Haifa, and Tiberias, destroying Jewish properties and setting fire to multiple synagogues, attacking worshipers at the Western Wall with rocks, and attempting to lynch Jewish motorists.

Back in Nashville, The Tennessean paper published a factless and arrogant op-ed about the violence in Israel and the “destruction of sacred places” written by Imam Ossama Bahloul resident scholar at the Islamic Center of Nashville. For example, Bahloul suggests that “Jewish settlers” have caused violence at the Al Aqsa mosque while deliberately ignoring the attack on Jerusalem Day celebrants with “slabs, stones and fireworks” which had been stockpiled by Palestinians at the Al Aqsa mosque for this purpose:

“Critics of Israel, and the international media, have portrayed the recent clashes on the Temple Mount, which Muslims call Haram esh-Sharif, as if Israel had attacked the mosques or violated their sanctity. In fact, Israeli riot police entered the holy site to stop Palestinians from launching new attacks from the compound after they did so after prayers on the last Friday of the holy month of Ramadan last week.” 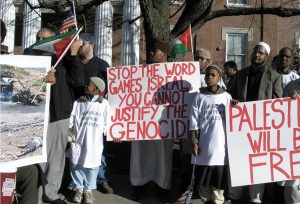 2009 Murfreesboro – Bahloul protesting “war in Gaza’ in support of Hamas

How far do they plan to take it in Tennessee?