“Last week, in the dead of night, unaccompanied migrant children were flown into Tennessee without our approval or consent. I am alarmed that the Biden Administration would use taxpayer resources to transport refugees into Tennessee without transparency or coordination with state authorities. This overreach and secrecy has to stop.”

In a recent interview with WRCBtv Chattanooga, Green said that he drafted the bill in response to what happened in Chattanooga and that “this bill would mandate permission of the state before they move illegal migrants to Tennessee.”

One really obvious problem is that U.S. law recognizes refugees as legal immigrants who enter the country with express permission of the U.S. government in conformance to specific criteria in U.S. law defining who is a refugee.

The “illegal migrants” Green refers to are Unaccompanied Alien Children (UAC) who are either dumped at the border by human traffickers or like 16-year old killer Edwin Mejia who was sent to his illegal alien brother in Tennessee, cross the border on their own.

If the UAC is from a contiguous country, meaning Canada or Mexico and is not a victim of trafficking, Customs & Border Patrol (CBP) can send them back. If however, the UAC is from a non-contiguous country, the U.S. Office of Refugee Resettlement (ORR) takes custody. These UACs can apply for asylum or other relief like the Special Immigrant Juvenile Visa (SIJV) which allows them to remain in the U.S. and puts them on a path to citizenship.

Unlike refugees who are legally admissible to the U.S. before they arrive, UACs are subject to removal until and only if they end up with a legal immigration status.

Importantly, the transfer to ORR custody does not in any way convert the UAC into a refugee. In 2002, Congress passed the Homeland Security Act which did many things including moving custody of the UACs from the former Immigration & Naturalization Services to ORR. This change evolved from a series of lawsuits and consent decrees but did not magically make UACs refugees.

This is a very important data point relating to Green’s bill. Whether he realizes it or not, the way he explains his bill’s purpose is precisely what the Obama administration tried to do in 2014, with the Central American Minors (CAM) program to administratively expand U.S. law on refugees and create a refugee resettlement program for this group. Refugees and asylees must show persecution on account of membership in certain groups, such as nationality or race. The CAM program allowed the ill-defined “particular social group” category to be applicable for various new conditions, such as single motherhood. If it were to be applied system-wide to refugee resettlement it would represent the largest expansion of the definition of the term “refugee” ever seen in the history of the resettlement program.

“I am pleased to announce that we have plans to expand the U.S. Refugee Admissions Program in order to help vulnerable families and individuals from El Salvador, Guatemala and Honduras and offer them a safe and legal alternative to the dangerous journey that many are tempted to begin, making them at that instant easy prey for human smugglers who have no interest but their own profits.”

Looking at Obama’s attempt to expand who qualifies as a refugee, Center for Immigration Studies senior researcher Dr. Nayla Rush questioned whether Central American children even meet the legal definition of refugee. She makes the following points :

One of the problems with Obama’s CAM program was that the parent had to be in the U.S. legally to obtain the coveted refugee status for  their child in Central America. In fact, many of the parents in the CAM program are themselves illegal aliens.

In her conclusion Rush lets the real genie out of the bottle – it’s the children who, if they obtain refugee status, offer the route through which parents and siblings may obtain legal status in the U.S.

The libertarian Niskanen Center think tank also acknowledges that UACs are ineligible for refugee status. They argue that UACs could get refugee status if U.S. law would expand to include forced conscription, gang recruitment and gender discrimination.

It is a very real possibility that the Biden administration will like Obama, use administrative actions to expand who qualifies as a refugee. This is precisely how the U.S. refugee admissions program under Obama created the resettlement program for the LGBT refugee.

Green’s bill and his explanation of its purpose confuse UACs with refugees – precisely what Obama and the open border leftists want and the reason they categorize every illegal alien as a “refugee”.

Even if Green is trying to “cleverly” pre-empt a move by the Biden administration to recreate an Obamaesque CAM program, the mandate that “States Have a Say” will fall on deaf ears for the majority of Republican governors who turned down President Trump’s refugee resettlement opt out in 2019. 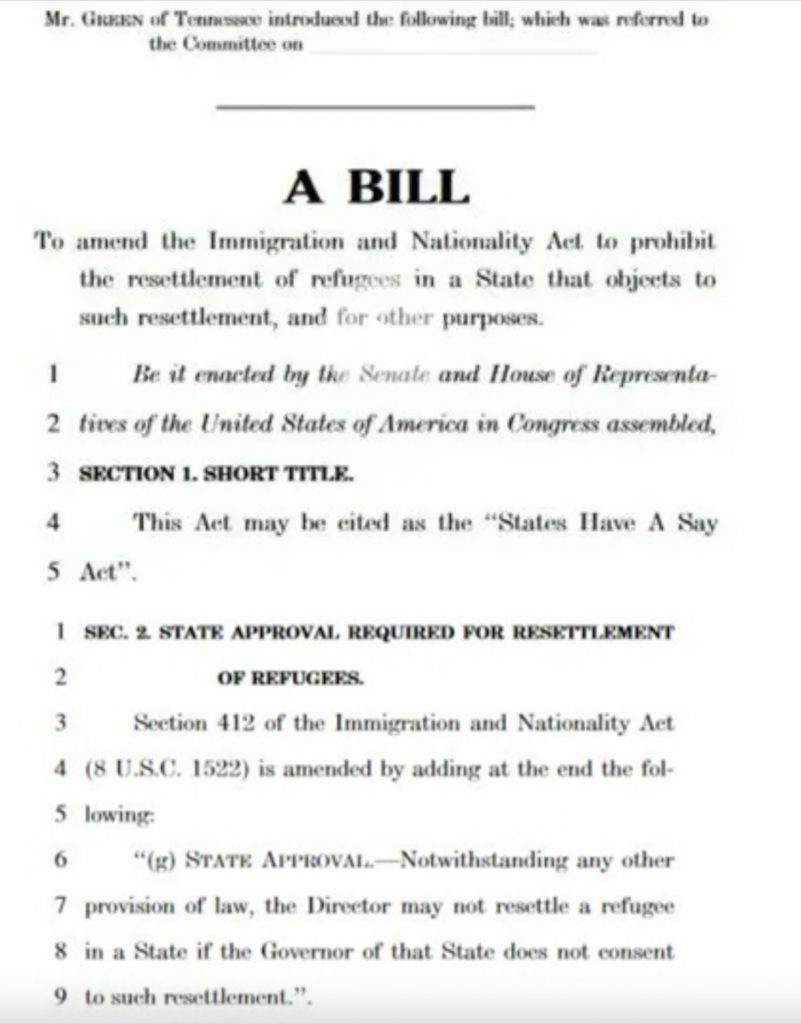 The plain language of Green’s bill says it will amend 8 USC 1522 – the section of federal law that addresses refugee admissions and which by reference to another section of the code, defines the legal term “refugee” – a term which does not include Green’s “illegal migrants”.

Even assuming Green is relying on the language of Trump’s presidential determination on refugee admissions for FY2021, UACs would still have to meet specific criteria to qualify as a refugee.

All of the legal mumbo jumbo aside, what Tennessee taxpayers should really be concerned about with Green conflating UACs and  refugee resettlement, is the lessons learned from Tennessee’s 10th Amendment challenge to the federal resettlement program. The big take-aways simply put are:

If one accepts Green’s explanation of his bill, then any objection voiced by Bill Lee to the UACs should be questioned. When Trump gave Lee the choice to say “no” to continued refugee resettlement in Tennessee, Lee abandoned the state’s sovereignty in favor of his personal agenda regarding refugees. Then when he was challenged on his decision, he doubled down and in contravention of Trump’s Executive Order, claimed he had the authority to consent to refugee resettlement for the entire state.

Tennessee’s Lt. Governor and Speaker of the House have decided to convene a joint study committee prompted by the delivery of UACs to the state. Lt. Gov. McNally’s office issued a press release about the joint study committee and seems to be the lone voice at this time that understands that refugees, migrants and immigrants are not all the same and have different immigration statuses.

And as seems to have become the norm, the news about what the Lee administration’s role in another mishandled and mangled state government function, is not good. It seems that another one of Lee’s departments may have facilitated the arrival of the UACs. Some reports suggest that Lee’s Department of Children’s Services knew and approved that the Chattanooga facility applying for a state license was “to provide housing, personal care, supervision and monitoring to up to 100 unaccompanied minor children . . . ideally up to 30 days, until they are reunited with a sponsor home or appear at an immigration hearing.”

Sounds just like the set-up to receive and care for UACs.

If this report is accurate, Lee put some big egg on the faces of every Tennessee U.S. and state elected official yelling for transparency.

At the very least, we can only hope that the new joint study committee looks to real experts in the field on these issues. As for Mark Green, he should take a cue from the Lt. Governor and get some help from experts like Dr. Rush and figure out what he’s really trying to do with his bill.

For starters though, Green should stop advancing the idea that there is a legitimate connection between illegally entering UACs and refugees and would do well to recall the multiple documented instances when MS-13 gang members entered the U.S. as UACs and were then awarded with refugee status – here, here and here. This should be of paramount concern now that under Biden, USCIS will stop asking about gang-related information when evaluating adjustment to legal permanent resident, aka, the green card which UACs who are awarded either asylum or the SIJV status are eligible to apply for.

At the very least, Green’s voters should expect an informed discussion of the issue.

*”The Migration Policy Institute (MPI) is a think tank that produces research and policy analysis advocating for permanent legal residence for undocumented immigrants in the United States and increased legal rights for migrants and refugees worldwide. Migration Policy Institute receives funding from a variety of left-of-center ideological funders, including the Bill and Melinda Gates Foundation, the John D. and Catherine T. MacArthur Foundation, and George Soros’s Open Society Foundations.”

8 thoughts on “Is Mark Green Conflating Illegal Aliens With Refugees?”