And the left loves him for it! They love him because he is adamant about continuing to force refugees into Tennessee communities regardless of what those locals have to say about it.

The left and the federal contractors love what’s coming out of Lee’s mouth because they can read the tea leaves….

Bill Lee is going to have the U.S. Office of Refugee Resettlement approve his plan for refugee resettlement in Tennessee. They understand that in the aftermath of Lee’s giving consent under the President’s Executive Order, Lee all but admitted that he was going to put the state smack right back into the federal program and retract Bredesen’s withdrawal from the program.

And Lee has pretty much said and shown that he really doesn’t care what local governments or voters have to say about that. Wow, if that’s not a “red flag” for counties to stand up and be noticed….

Bill Lee doesn’t seem to understand that Tennessee’s Tenth Amendment lawsuit prompted by the Supreme Court’s decision in the Sebelius Medicaid expansion case is about state sovereignty. It just also happens to be about the Tennessee General Assembly being THE authority under the state Constitution to appropriate taxpayer money.

The 2012 decision by the Supreme Court coined the phrase – “The States are separate and independent sovereigns. Sometimes they have to act like it.” 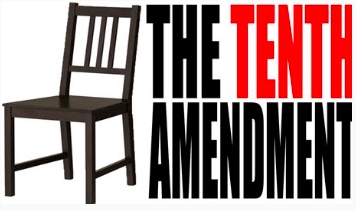 And Tennessee did just that in 2014, passing a bill to prohibit Governor Haslam who was itching to expand Medicaid with his “Insure Tennessee” plan. The legislature understood that the plan would put the state budget on the hook for an ever expanding bill that would overwhelm the state budget which is the sole responsibility of the Tennessee General Assembly and that the Governor did not have the power under the state Constitution to commit to that expenditure – that’s the job of the legislature.

So the Tennessee General Assembly acted to preserve their own power of the purse and tied the Governor’s hands.

Fast forward a few years and some really smart lawyers at the Thomas More Law Center (unlike Tennessee’s Attorney General), understood that the principle in the Sebelius case applied in the same way to the federal refugee resettlement program as it is implemented at the state level. They understood that it was even worse in a state like Tennessee which had withdrawn from the program but was still being forced to pony up state money to cover the transferred costs for the refugee program.

So when Govenror Lee’s minions inside and outside of his office talk about all that federal money that would flow into the state with the arrival of new refugees? Maybe ask about all that other money that the state has and will continue to shell out just because Congress decided it wasn’t going to spend more of its/our money on the program they created.

Sort of sounds like a double whammy for Tennessee taxpayers.

But it’s actually worse than that.

While Bill Lee is forcing Tennessee taxpayers to live out his personal agenda and uses the state government for what the Bible says is an individual’s mandate, he will kill off the Tennessee lawsuit, the entire premise of which was based on the sovereign status of both the state and the legislature.

He may think the deal is worth it, but regular ole’ deplorables understand that governors come and go, but deplorables stay put and will defend their ground even if he won’t.