Fiscal sponsorship is a fast way for a new “non-profit” entity to solicit and accept tax-deductible donations using the 501(c)(3) umbrella of its fiscal sponsor who is responsible for reporting to the IRS. This arrangement has been criticized as potentially enabling tax-deductible donations to flow quickly to an entity ultimately deemed not qualified to receive this money.

For example, in 2016, the Thousand Currents Foundation agreed to act as the fiscal sponsor for the Black Lives Matter Global Network Foundation (BLM GNF), the money chest for the BLM movement. Since the BLM GNF was not a 501(c)(3), the fiscal sponsorship shielded it from “having to file regular Form 990 reports with the IRS, [or] disclos[ing] comprehensive financial data in the same way a tax-exempt nonprofit must.”

Instead, the BLM GNF operated as a “project” of the Thousand Currents Foundation. Under this arrangement, millions of dollars flowed into the BLM GNF.

BLM co-founders Alicia Garza, Patrisse Cullors and Opal Tometi served as advisors to the BLM GNF which has been noted for its lack of transparency. Between 2017 and 2019, the BLM GNF spent about $4.6 million dollars on travel, consultants and personnel versus a measly $328,000 granted to outside organizations including some BLM chapters.

As of 2018, Garza and Tometi have moved on to other projects.

Garza founded the Black Futures Lab (BFL) whose fiscal sponsor is the Chinese Progressive Association (CPA) which the Heritage Foundation says is a promoter of the Community Chinese Party.

The Black Futures Lab supports the BLM GNF and the Movement 4 Black Lives. Recall, that Highlander co-director Ash Lee Henderson is on the policy team of M4BL and that Garza, considers Ash-Lee Henderson “fam.”

There is plenty of cross-pollination in funding sources for these “social justice” organizations with money funneled through a spider web of foundations. Highlander’s donors listed by Influence Watch include several Soros-funded front groups including Tides and the Proteus Fund. Other organizations in Tennessee including TIRRC and the American Muslim Advisory Council have received money from the Proteus Fund. Highlander’s last available 990 from 2018, shows an annual revenue of over $4 million dollars and the other Highlander Fund showed an end of year balance of almost $3 million. Flush with money, Highlander’s co-directors are ready to hire an executive assistant. They are also advertising for a full-time digital strategist and a person to expand Highlander’s Economics & Governance program.

To date, Highlander is acting as the fiscal sponsor for seven organizations which include, BOLD (Black Organizing for Leadership and Dignity), National Bail Out, People’s Advocacy Institute, Power U Center for Social Change, SiOP (Standing in Our Power), Southern Connected Communities Project, and The STAY Project.

All of these organizations are doing their part for “transformative justice” and community organizing. Highlander describes its fiscal sponsorships as “Incubating & Innovating Radical Work – Highlander incubates and innovates radical work by offering fiscal sponsorships and high capacity support to projects and networks.” (see December entry).

Power U’s “principles of unity” mimic much of Ash-Lee’s M4BL’s policy platforms – “the systems of White Supremacy, Capitalism, and Heteropatriarchy are the roots of oppression in our society.”

Among Highlander’s fiscally sponsored organizations, Power U and The Stay Project target young people, complimenting Highlander’s own youth programs – Children’s Justice Camp (ages 6 -12, to “work toward a society that celebrates diversity and equity through the brilliant minds of our youth”), Seeds of Fire (ages 13 -17, to train youth into social justice warriors “to build collective power and influence critical shifts in policy decisions and practice”), and training programs for college students. 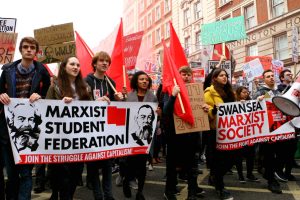 In 1935 Hitler reminded us that “he alone, who owns the youth, gains the future.”

The concept was simple – children of the Hitler Youth movement would be immersed in the ideology of Naziism using education and Nazi propaganda to ensure that Naziism would control Germany’s future.

It appears that the Highlander Center agrees with Hitler about molding young minds. It is using fiscal sponsorships to expand its reach and help raise a new generation of Marxists.

financial growth combined with its national reach and connectedness to its Marxist leadership.

For example, in 2018, the TN Immigrant & Refugee Rights Coalition (TIRRC) had Highlander use its “local and national relationships” to bring an intense and negative focus to ICE arrests of illegal aliens working at a meatpacking plant in Bean Station, Tennessee.

Ash-Lee Henderson is the driving force for the Highlander Center, committed to using her national connections and growing resources to create the “new America.” She explains it this way – if the “Breathe Act” which she worked on with Congress squad members Ayanna Pressley and Rashida Tlaib, which “uses federal dollars to reward cities and counties that defund their police departments” doesn’t get signed into law then, she “promise[s] that you will continue to see the kind of fervor and rigor of peaceful and passionate and righteously rageful protests in the streets until Black people get what they want.”

BLM leader Patrisse Cullors, a self-described Marxist, puts it more simply – if their demands aren’t met, then “burn everything down.”

And they have proven that they mean it.