A Good Muslim believes Allah is the creator of all things and Muhammad is the prophet, who was the perfect man. A good Muslim follows in the footsteps of his life, obeying only the laws created by Allah. Linda Sarsour is a good Muslim. Linda Sarsour is also the face of the “women’s movement” here in the U.S.,commanding a presence with her colorful hijabs, and a loud, focused voice. 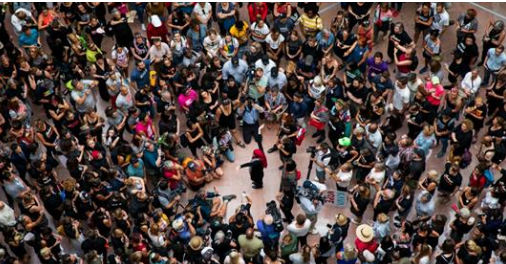 Sarsour leading the masses with her red hijab

For masses of ewes, (yes sheep)  she is their idol, she can do no wrong, and with her fierceness, she must be right in all that she says. What the ewes are missing, is she is a farce, a fake, a fraud. You see, in Islam everything she publicly supports is haram, or not permissible in Islam. A good Muslim does that though, it’s called Taqiyya, or the art of deception. Gain all the sympathy and support of non Muslims you can, and they will embrace you, and turn against anyone speaking out against the ideology..Islam.

SO what is deceitful about her fight for women rights?  According to the classic book of Islamic Law called the Reliance of the Traveller. the Koran, and the Hadiths, everything she says is. One of the most atrocious, and  barbaric practices in Islam is Female Genital Mutilation(FGM), yet, Sarsour, who could be a proponent against it, instead dams those that speak out against it.

Ayaan Hirsi Ali, a former Muslim from Somali, is proof of that. Ms. Ali, who suffered FGM as a young girl, is a staunch activist against it, calling for the reformation of Islam, which has all good Muslims wanting her dead. This tweet from 2011, is a taste of the hate from Linda Sarsour.

And this is the leader of the “women’s” movement!  However Linda Sarsour is a good Muslim who follows the life of the prophet Muhammad, and believes in Allah’s laws. Linda Sarsour can’t speak out against FGM, because Islamic law calls for it.

Her own religion calls for the mutilation of women, and she has the audacity to claim she is for women’s rights! Another lie perpetrated by her leading the women’s movement is the equality of women. Again, her own religion denies women basic human rights and courtesies, even urging husbands to hit their wives.

From the classic book of Islamic Sharia Law- the Reliance of the Traveller:

Linda Sarsour likes women to believe she is a feminist, tough and with no fear. However, once again the religion she chooses to obey and practice says otherwise. Do all the mothers who are divorced or seeking custody of their own children know the woman they are adoring believes women have no right to the custody of their children? Her law says so!

One of the biggest lies is Sarsours fighting for gays. According to classic sharia law, lesbians are charged with adultery.

Women accused of adultery under Islam are stoned to death. 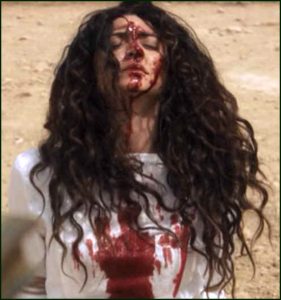 Linda Sarsour is the leader of the women’s movement and the women’s marches here in the United States. Her own religion dictates the denigration of women on every single level, yet masses of young and old women believe in her, and follow her every word. Perhaps it is her Palestinian ethnicity, her defense of immigrants or her mysterious islamic faith so many blindly embrace her.  Maybe its the resistance and hate for our President. Whatever it is, she has managed to pull the wool over their eyes.

This is the same woman that calls for Jihad against out President. She isn’t a hero, she isn’t a fighter for women’s rights, she is a “good” Muslim.