Now that you have been introduced to the Palestinian and leftist Jewish groups who have merged with  state and local social justice warriors, it should be clear the agenda really isn’t just to hold law enforcement accountable, nor is it an attempt to reform the criminal justice system. It’s all about  dismantling police,”intersectionality”, illegal immigration, antisemitism, and a general hatred for America. In this article we will focus on Nashville Tennessee, however, the same events are taking place in cities across America. The objective is for you to be able to identify these groups in your area, expose them, and shut them down.

So why should the people of Nashville and Davidson County Tennessee care about these groups?  Because your safety and security is at risk by the creation of a Community Oversight Board, whose coalition consists of members of groups looking to destroy and dismantle not only police, but the criminal justice system.

One group in particular is Palestine is Here. In 2017 they were formed to track and monitor local police departments and their relationships with training with Israeli police and military. Metro Nashville Police is one such dept. According to the Palestine is Here website:

The sole purpose of these groups is to parallel the injustices occurring to Palestinians who are at war with Israel thousands of miles away,  with “people of color” in the United States, by insinuating if American law enforcement continues to “train” with Israeli police more of their community members will die.

According to the report a “Deadly Exchange” created by the Researching the American Israelis Alliance (RAIA) states: 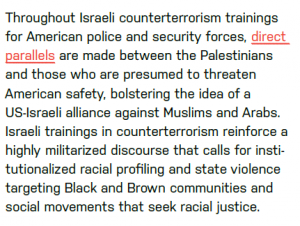 Riling  communities that are already disenfranchised, and disgruntled with the criminal justice system, suggesting any police departments that have trained with Israeli law enforcement are prone to killing more members of their community  is a dangerous falsehood and should not be tolerated or accepted.

The Community Oversight Board in Nashville has many coalition members that are in line with this radical ideology, including Showing Up For Racial Justice (SURJ) whose chapters are listed as endorsers of the Deadly Exchange, the report which outlines the relationships between police and Israel. SURJ is one of the current members of the Nashville Community Oversight Board. (Click here to see Coalition members)

The Nashville Community Oversight Board is rife with organizations that are radical, and anti-police, who in no way will be able to fair and unbiased. Residents of Nashville and Davidson County must not be swayed by the mere sound of a oversight board,  but must understand its true strategy.  The falsehoods presented by organizations behind the scenes is one that is dangerous and misleading. While many believe the formation of an oversight board is necessary, starting from scratch to incorporate civilians who can truly help their communities is a must.

Next: Meet the local groups behind the scenes