Next week, The Tennessee Conservative will host its second Freedom Summit billed as “A Gathering of Tennessee’s Most Influential Conservatives in Media, Policy, Advocacy & Activism”.

Brandon Lewis, founder of The Tennessee Conservative, will speak at the summit on “Corporatism Vs. Conservatism: Reclaiming the TNGOP”. Given the stated theme of the summit and in particular Lewis’ subject, it is ironic that a representative of the Koch-backed AFP whose immigration agenda is intended “to benefit big business and corporate interests”, will also be speaking at the summit.

AFP-TN state director Tori Venable, who was featured at last year’s summit, will be back again this year. Venable works for and represents the Koch-backed AFP. She also helps to promote the immigration agenda of AFP’s LIBRE Initiative.

This year AFP’s Venable wears two hats in her listing – as a representative of AFP and something called the “conservative braintrust panel”. The term “braintrust” may be used to designate a pool or network of individuals with a specific talent or expertise. For sure, AFP-TN has a “talent” for hiding AFP’s agenda on illegal immigration from Tennessee conservatives – unless of course you remember Venable’s 2019 oped about finding “common ground” on illegal immigration.

It is reported that the bulk of AFP and the AFP Foundation’s backing come from personal foundations funded and controlled by billionaires Charles Koch and his late brother David who used to chair the AFP Foundation board. AFP Action PAC is also heavily financed with Koch money.

Keeping it all in the “family”, Mark Holden, general counsel and senior vice president of Koch Industries who now chairs the AFP Foundation Board, co-chaired with David for the two years preceding David’s death in 2019.

While the Koch brothers were reputed to be fiscally conservative, David was a self-described “social liberal” who was pro-abortion. In 1980, David ran as a libertarian vice-presidential candidate promoting “full legalization of abortion”. The remaining Koch brother Charles appears to agree with his brother’s positions.

AFP characterizes its positions on legal and illegal immigration as intended to reform a broken immigration system.

The Koch position on illegal immigration was initially centered around amnesty for illegal aliens granted DACA.  More recently, the Koch network which includes the Koch-funded LIBRE discussed below, “are cheering President Joe Biden’s automatic extension of work permits for border crossers and illegal aliens….Many of the work permit categories eligible for this auto-extension are earmarked for illegal aliens, including those who simply filled an asylum application that the government has yet to adjudicate and those with TPS”.

The illegal aliens with federal work permits which are being cheered by the Koch network, are now eligible for commercial and professional licenses under the new Tennessee law sponsored by Republican state senator Shane Reeves. The new Tennessee law advances the agenda promoted by AFP and LIBRE.

AFP-TN Venable’s 2019 oped urging Tennesseans to find “common ground” on immigration was co-authored with the president of LIBRE. AFP-TN’s silence on the Reeves bill and deliberate omission to score his “Workforce Expansion Act” seems like an almost deliberate effort to pretend that AFP-TN somehow stands apart from its parent organization’s policy and political objectives. It looks very much like the salaries of AFP-TN’s director and deputy director are paid by AFP and here, with additional support from Stand Together which will be discussed below.

Does anyone really believe that AFP-TN can disavow the AFP-LIBRE immigration agenda?

With regard to legal paths for immigration the Koch AFP, joined by the George W. Bush Institute, the U.S. Chamber of Commerce and a coalition including Bethany Christian Services, is pushing Biden to expand mass immigration to the U.S..

Bethany Christian Services is a Tennessee licensed provider of adoption and foster care services and operates in five locations in the state. They maintain a contract with the U.S. Office of Refugee Resettlement to receive and provide transitional foster care services to Unaccompanied Alien Children (UAC) who are typically smuggled across the border by family members who themselves are here in violation of immigration laws. A Bethany representative testified to last summer’s Joint Study Committee convened by the Tennessee General Assembly. Several committee members praised the work of Bethany despite the fact that their movement of UACs facilitates illegal immigration to Tennessee.

When the Koch network of “donor class organizations” talk about helping employers who are “struggling to find workers to fill jobs in many industries”, they are talking about cheap foreign labor regardless of whether it undercuts the U.S. working and middle class.

AFP has also made it clear that they will use their super PAC AFP-Action to endorse any candidate who supports AFP’s amnesty agenda. So, it is no coincidence that AFP-Action endorsed John Coryn from Texas and Thom Tillis from North Carolina, the two Senate Republicans who approached Democrats to resurrect discussions about amnesty for grantees of the illegal DACA program.

AFP-TN’s Venable also serves as an AFP-Action Senior Advisor who stumped for Marsha Blackburn in 2018.

AFP’s advocacy for illegal and legal immigration run through the veins and interlocking leadership of AFP, its sister organization LIBRE, it’s Uniting for Immigration Reform PAC and their Stand Together initiative. 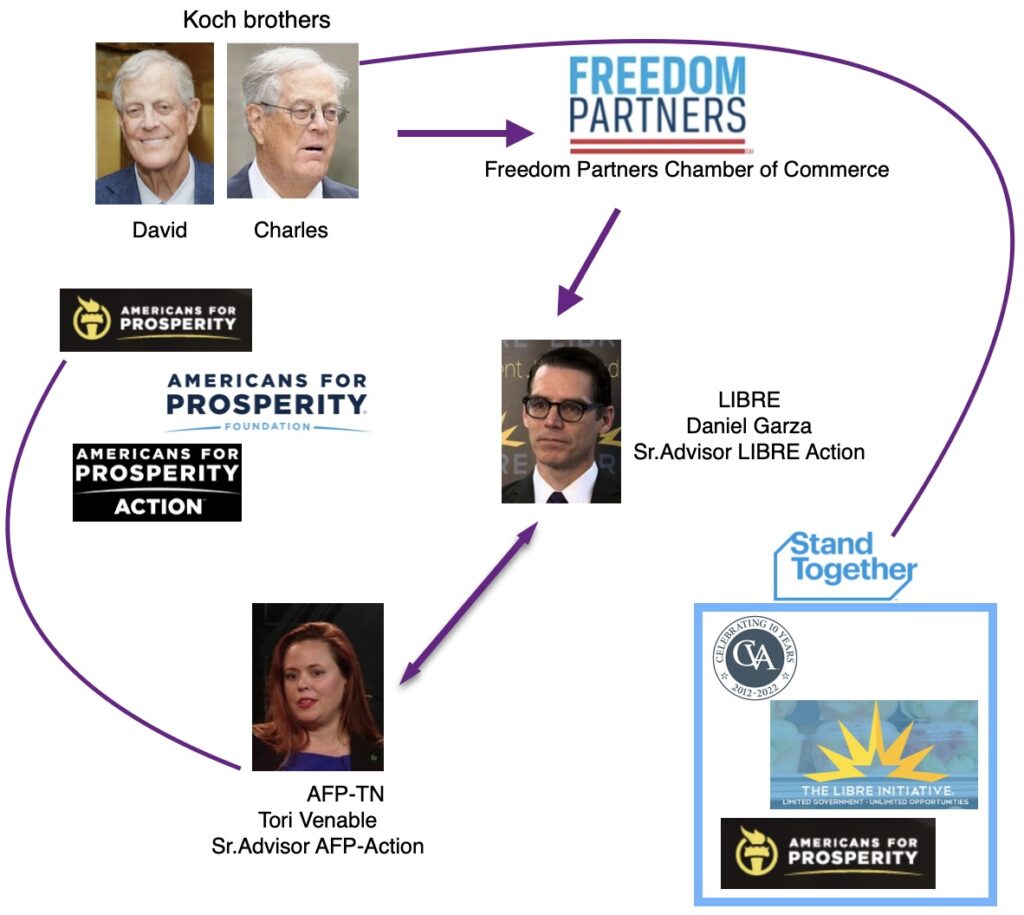 In 2011, Daniel Garza launched the LIBRE initiative with almost $10 million dollars from the Koch’s Freedom Partners Chamber of Commerce. LIBRE’s primary mission was to convert Latinos into Republican voters. Much like AFP, “[i]n an investigation [in 2015], ProPublica found that LIBRE not only receives millions of dollars of funding from the Koch network but appears to be controlled by it as well.”

As far back as 2013, LIBRE’s President Daniel Garza (who served in the Bush administration), has endorsed amnesty for DREAMERs, i.e., beneficiaries of Obama’s illegal DACA program.

LIBRE’s early “statement of principles” seeking legal status for children brought into the U.S. illegally by their parents required the parents to be working legally in the U.S.. The current revised LIBRE position focuses solely on advocating for ”permanent status” for “DREAMers” and those with Temporary Protected Status (TPS). It no longer matters whether the parents or whoever may have transported the “DREAMer” to the U.S., is themself here legally.

In fact, in last year’s case in federal court where the DACA program was ruled “illegal”, and DACA grantees were acknowledged to be illegal aliens per federal immigration law, a document introduced by the U.S. government showed that half of the DACA grantees were visa overstayers and many DACA grantees entered the U.S. on their own. DACA only requires that the individual be at least 15 years old when they apply and have entered the U.S. before turning 16. According to FAIR, “the age range of eligible beneficiaries spans from 24 to 40 years old. No DACA recipient or DACA-eligible alien in 2021 is a minor.”

As to the “undocumented population”, LIBRE wants a “permanent legislative solution” so that they can “come out of the shadows and get right with the law.”

According to LIBRE’s 501(c)(3) arm called the LIBRE Institute, it operates in ten states including North Carolina, a state which has struggled mightily with crimes committed by illegal aliens.

AFP and AFP Foundation’s tax filings from 2017 through the last available 2019, lists Garza as Executive Director. This is the same Garza with whom AFP-TN’s Venable co-authored the oped on finding common ground on immigration.

Jorge Lima, AFP’s Senior VP of Policy, listed as such in AFP and AFP Foundation’s tax filings from 2017 through the last available 2019, was variously the Executive Director and Policy Director of LIBRE between 2013 and 2018.

LIBRE’s position on amnesties tracks the 2013, bipartisan Gang of 8 comprehensive immigration reform bill which included a blanket amnesty called “registered provisional immigrant status” for illegal aliens in the U.S.. Even the Congressional Budget office agreed that the bill gave amnesty to illegal aliens, and also reported that the G of 8 plan would barely make a dent in reducing future illegal immigration.

The Gang of 8 bill also incorporated the goals of the DREAM Act to amnesty illegal aliens who entered the U.S. before age 16, whether brought by parents at a young age or entering on their own.

To no great surprise, Tennessee’s globicans Corker and Alexander voted for it.

In 2019, Charles Koch announced that he was reorganizing his variously funded entities to now be called “Stand Together”. One of the groups was the Seminar Network, “a network of nonprofits funded by Charles Koch and like-minded conservatives and libertarians who donate at least $100,000 annually to ‘help people improve their lives.’”

Along with many worthy issues affecting people’s lives such as encouraging businesses to hire formerly incarcerated individuals and help them restart their lives, the Seminar Network also tried to use its heft with Trump, to push amnesty for DACA.

In an effort to consolidate its influence, AFP put LIBRE and Concerned Veterans for America (CVA) under the AFP controlled “Stand Together”. Importantly, AFP reserved to itself, “all political and policy efforts of LIBRE and CVA.

This also means that wherever a state AFP chapter operates, so does LIBRE. AFP-Action and LIBRE Initiative Action also work together in state legislative races.

On the heels of this reorganization, AFP’s CEO and Senior Advisor for AFP-Action, issued a memo announcing four new super PACs that will “make contributions directly to candidates”. That way politicians seeking re-election and would-be politicians won’t be afraid of earning their AFP PAC money even if they make their constituents unhappy.

While Tennesseans watch the General Assembly’s House chamber move toward the center and the Senate drift left, it makes it much more important for The Tennessee Conservative news outlet to remain credibly conservative. Featuring AFP and worse still, promoting AFP as a conservative organization, raises legitimate credibility questions.