Too many of the Tennessee General Assembly’s GOP are redefining the “conservative” label similar to how leftists have changed the definition of terms like “woman”, “recession”, and “illegal alien.”

Three bills from the 2022 legislative session, one of which became law, leave little doubt that “what is to be conserved”, is instead, being trashed.

First is the professional and commercial licensing bill for illegal aliens (SB2464/HB2309), which was sponsored by Senator Shane Reeves who has characterized his bill as “consistent with conservative principles” and as a “conservative immigration and poverty solution”.

Second is one of the HPV vaccine bills (SB2026/HB2032) which was sponsored by Senator Bill Powers whose campaign website promised that he would “use common sense and conservative values to make our state even greater.”

Third is the other HPV vaccine bill (SB148/HB946) sponsored by Senator Dr. Richard Briggs, who is promoting himself as a conservative in his recent facebook campaign ad. 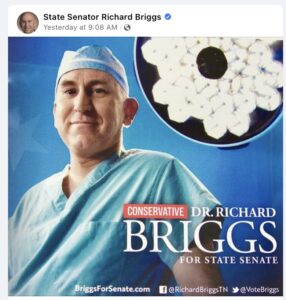 Each of these bills began as caption bills and all three were championed by a significant number of Republicans.

Backgound: what is a caption bill?

The Legislature’s website defines “caption” as a “[b]rief description of a bill’s contents appearing on a bill and the bill’s jacket. A bill’s content cannot be any broader than its caption.”

The critical part of the caption is the reference to the part of the state code to be amended. Whatever content is filled in below this heading often doesn’t relate to the language filed later as the “amendment to rewrite the bill”. This new language presented to a committee is what is intended to be the substance of the bill.

The problem for those who value transparency in government operations is that the amendment which “rewrites the bill”, i.e., the actual language of the bill, is not available for public review until after this amendment is adopted by the committee and subsequently posted on the legislature’s website.

This was precisely the case with all three bills referenced above. Each bill used bogus language such as filing or not filing an annual report or changing the number of days from 30 to 45.

With this background and technical details addressed, consider the three following bills.

Once the amendment to “rewrite the bill” was introduced and adopted by the committee, individuals with illegal immigration status who have a temporary federal work permit, were deemed eligible for the state public benefit of commercial and professional licenses.

Individuals with illegal immigration status who choose to make Tennessee their home can now apply for business licenses and become, for example, licensed teachers and lawyers.

Along with all Democrats present, 35 House and 15 Senate Republicans voted to pass this bill.

Once the amendment to rewrite each bill was filed and introduced in committee, these bills taken together authorized dentists and other licensed healthcare providers to administer the HPV vaccine to minors without parental knowledge or consent. Once the intent of these bills became known (and the likely negative public reaction), Powers added consent from the parent or legal guardian to his bill before a dentist could administer the vaccine.

The Briggs bill, however, authorizing certain licensed healthcare providers to give the HPV vaccine to a minor without consent from a parent or legal guardian was not changed.

Both Briggs and Powers were co-sponsors of Reeves’ licensing bill and Reeves as a member of the Senate Health Committee voted for both HPV bills.

As to the HPV vaccine bills, do generally understood conservative values which Senator Powers promised would guide him, support the state invading a parent’s right to manage their child’s healthcare? Does a self-described conservative like Senator Briggs believe it is good statecraft to give healthcare providers greater rights than parents or legal guardians, to make certain healthcare decisions for minors? Regarding the licensing bill, does Senator Reeves believe that it is a conservative principle or “solution” to ignore the law and reward illegal immigration?

When GOP legislators Richard Briggs calls himself a conservative and Bill Powers and Shane Reeves sell their bills as reflecting some element of conservative thinking, they seem to have another definition of “conservative” from the one I and many other Tennesseans share. These legislators need to find a different word to justify their actions because I’m not giving up my conservative principles and values.