Today, local elections are extremely important as they are the foundation for how our states run. Even in small communities, like the city of Tullahoma TN, using feelings and emotions as a barometer for how you vote can no longer apply. Candidates count on their niceness, or how charismatic they are to gain support and your vote, but in todays political climate, researching before you head to the polls is imperative.

Rupa Shukla Blackwell, an alderwoman in Tullahoma is running for re-election, and if you are even remotely moderate,  Ms. Blackwell is not your choice. Once again, Ms. Blackwell has the endorsements of two far left, radical, “woke” organizations.

Women for Tennessee’s Future self describes itself on their website as this:

Wait! What does “reproductive justice” mean for the city of Tullahoma? One question for Ms. Blackwell should be is she pro-choice, like her endorser or pro-life? Voters have a right to know.

In her bid to form a “diversity council”, which she wanted to fall under the umbrella of city government, she is elected to serve all people, not those she feels is “underserved”. Thankfully, the diversity council idea failed, and is now a private entity, not a government  one.

Another organization jumping to support Ms. Blackwell is Emerge TN. Here is what they believe in as stated on their website:

Ms. Blackwell seems to jump on any trend, despite the controversy that surrounds them. Here she proudly hashtags black lives matter, while participating in a parade to support them. BLM has been proven to be a fraudulent group that has misspent millions of dollars, not on their own community but for the founders personal gain. Does Ms. Blackwell still support BLM? 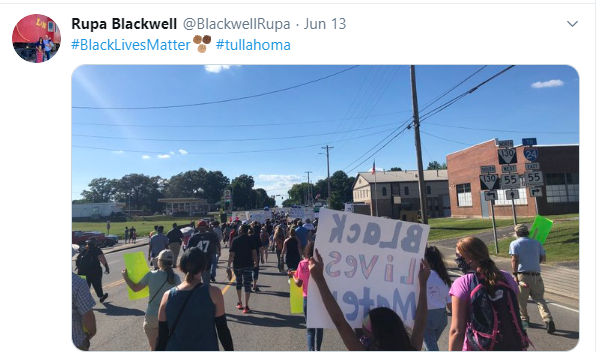 Ms. Blackwell is an active member of “Silent no Longer”

While this organization does support victims of domestic violence, and sexual assaults it also promotes and embraces woke agendas.

There are many pressing questions the citizens of Tullahoma need to be asking of their candidate for alderwoman Rupa Blackwell.

Since you are supported and endorsed by Women for Tennessee’s Future, who are “pro choice” and are fighting for abortion rights in TN, are you pro-choice or pro-life?

Emerge TN, another supporter of you, and their national branch project our country to be primarily run by blacks, browns, lgtbq+ and indigenous people. Do you believe in identity politics, and that qualifications should only be based on race, gender and sexual preferences?

Since you have been endorsed again by these groups, will you be beholden to their agendas?

Do you still support BLM?

How do these organizations and their beliefs help the city of Tullahoma to become a better place to live?

Ms. Blackwell has in the past few years written many articles on her victimhood, and seems to lack the focus and attention to what makes a city better. Personal beliefs are one thing, projecting them into her policy making decisions are quite another. Time to rethink who will better qualify to make Tullahoma greater, not who appears nice and friendly.

1 thought on “Who Is Rupa Blackwell? Know Before You Vote!”