Let’s get right to the point.

Rupa Shukla Blackwell is running again for her position as alderwoman in the city of Tullahoma TN, but is she using her victim status to gain sympathy and support? While being a victim of domestic abuse is a horrible, life altering experience no one should have to endure, perhaps it seems more appropriate for Ms. Blackwell to be a social worker or police officer. Sharing her experience on a regular basis, more and more it makes sense she would be a better advocate for victims than a public policy maker. 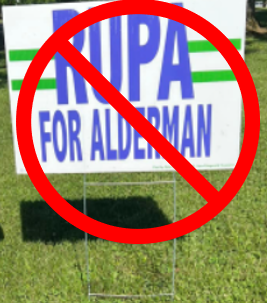 Being an elected official in any capacity requires attention to ALL community members, not just those she can personally relate to. Ms. Blackwell previously was the voice to create a city “diversity council” under the thumb of the government. By doing so, Ms. Blackwell implied most people living in the city were somehow bigoted and racist if they didn’t believe in diversity. Thankfully, her idea was shot down, as the city of Tullahoma is a wonderful, inclusive city to live and work in.

Yes Ms. Blackwell is a charismatic, lovely young woman who enjoys her city, but her constant portrayal of herself as a victim should not be a reason to vote for her. Today’s political climate demands those who are decisive, and focused on what makes a city better and more efficient. Using feelings and emotions as a barometer to make decisions for an entire city is not effective.

In a featured article in the Tullahoma News, Ms. Blackwell states : This year before embarking on these important sessions in our schools, I wanted to share a bit about my story with our community so that you would understand why this work is important to me. When I originally wrote this as a cautionary tale, the story was dark. But as I wrote, the story evolved. Over the years, without me realizing, I had finally found true freedom. I believe in this work because I want to whatever I can to help interrupt the cycle of violence many in our community are experiencing. I believe in this work because I don’t want any of these kids to experience what I experienced.

While this is truly admirable and noble, there are other places Ms. Blackwell may better serve her community, and perhaps social work is one such place. This isn’t about being mean to Ms Blackwell, it is truly about seeing where she directs her energy.  In today’s political climate, social activism is not the qualification one needs to be a political figure.

Coming up in part 2, see How Rupa Blackwell is connected to the social justice agenda.