The TN Immigrant & Refugee Rights Coalition (TIRRC) repeatedly tries to turn refugees, the people they claim to represent, against the government that pays for all the public support made available to help them start new lives in Tennessee.

TIRRC willingly uses these people for its own political agenda and fundraising goals. TIRRC doesn’t even respect refugees enough to give them reliable and accurate information about core Constitutional issues like the ones currently being addressed by the TN General Assembly.

TIRRC doesn’t even have enough respect for the refugees they claim to represent to honestly disclose to them that nothing in the state’s Tenth Amendment lawsuit is anti-refugee or even anti-immigrant. The lawsuit is about the relationship between the state and federal government and who pays for what.

TIRRC won’t be honest with refugees about that information because it would damage TIRRC’s political propaganda and refugees might not see TIRRC as the immigrant champion it claims to be.

TIRRC uses refugees to help shield their advocacy for illegal aliens like opposing the anti-sanctuary city bill so that illegal aliens who commit crimes return to the community as opposed to being deported.

The six paid TIRRC lobbyists and federal contractors – each profiteers in their own right, use these people to line their own pockets.

Nathan lends a hand in helping TIRRC undermine Constitutional principles. Take a look at what Ridley considers his “accomplishments” – “[w]orked with immigration reform clients, Conexion Americas and the Tennessee Immigrant and Refugee Rights Coalition to make residency requirements for Tennessee born college students with undocumented parents consistent with other students.”

Both Conexion and TIRRC are named affiliates of La Raza. “George Soros has generously funded Soto’s NCLR organization over the years in amounts typically exceeding $2 million.” TIRRC has also been blessed with Soros money.

Conexion Americas was founded and was led for years by Renata Soto who has been involved with leading and remains attached to the National Council of La Raza (NCLR). She was also an Indivisible organizer.

“Angel Padilla an Indivisible Guide author, was an immigration policy consultant at La Raza in 2014. After leaving La Raza Padilla moved to the National Immigration Law Center (NILC). Padilla and Soto may well have first crossed paths through La Raza. Beginning in 2012, Soto served as the vice-chair of La Raza’s board until she was elected as chairman in 2015. She remains listed as Chairman for La Raza’s 2017-2018 slate.”

Oh so very cozy with plenty of connective tissue like the fact that TIRRC claims partnership withIndivisible groups across Tennessee including the one in Greene County whose picture-posting member has been a recent source of “concern.” 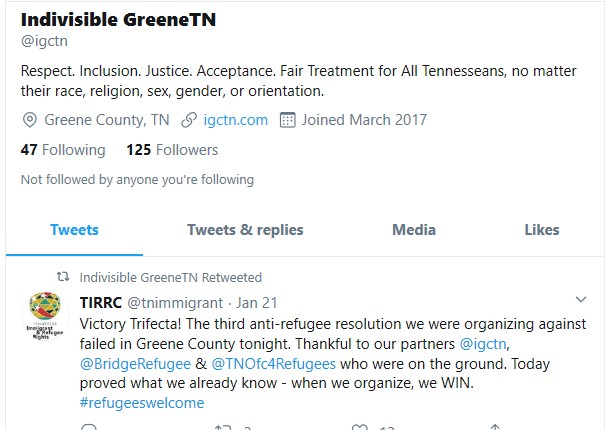 “Indivisible was founded as an off shoot of former President Barack Obama’s “Organizing for Action” which trains people across the country how to use Saul Alinsky style tactics to go after political opponents. Its founders Ezra Levin, Angel Padilla, and Leah Greenberg, all former democratic congressional staffers created Indivisible immediately after President Trump was elected as a means to resist his agenda and encourage disruption to his policies on all levels.”

TIRRC has used a whole bunch of signage threats over the years like “Today we march, tomorrow we vote” and “Immigrants make America great.” On the issue of refugees, they’ve decided to counsel legislators about what is and isn’t moral.

That’s rich coming from an organization that gets its training from socialist organizations like the Highlander School, partners with the despicable Southern Poverty Law Center (SPLC), and advocates giving legal protection to illegal aliens who get arrested for committing violent crimes in Tennessee communities.

Here’s a slogan which better describes TIRRC – “no low is too low.”

3 thoughts on “They Don’t Respect the Constitution, the Law or the People They Claim to Represent”