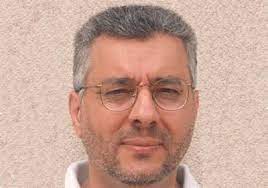 “Islam isn’t in America to be equal to any other faiths, but to become dominant. The Koran, the Muslim book of scripture, should be the highest                                 authority in America, and Islam the only accepted religion on Earth.” – Omar Ahmad, co-founder and past president of the Council on American-Islamic Relations

This is the belief held by vast numbers of pious Islamists throughout the United States, but it is not something you will hear during interfaith gatherings. Instead, they will go to great lengths to promote the commonality and oneness of Christianity and Islam.

“The Common Word BetweenUs and You” delivered to the holiest of Catholics, Pope Francis, is what’s called dawa.   Dawa is the prosteisizing of Islam, or the invitation to join Islam. Dawa is an obligation that all “good Muslims” must perform, in the hopes non-believers will submit. In this phase Muslims are promoting their “peaceful” and compatible version of Islam to Catholics, (and other denominations as well) in the hopes other faith followers will embrace and even eventually consider Islam.

The words in this document are important to understand, however In order to understand why this document is deceptive and a fraud, you must understand who many of the signatories are, the philosophy of the institution it was penned by and how it serves as dawa. Anytime a non-believer reads any part of the Koran, it is considered a victory.

Throughout this article we will be quoting from a document titled “The Methodology of Dawa” written and published in 1989 by SHAMIM A SIDDIQI, which is widely used to teach Muslims how and why Dawa should be used.

One of the first paragraphs in the “Common Word Between us and You” describes the Al Fatihah, the first chapter of the Koran and the prayer repeated by Muslims over a dozen times a day:

In the Name of God, the Infinitely Good, the All-Merciful. /

Praise be to God, the Lord of the worlds. /

The Infinitely Good, the All-Merciful. /

Owner of the Day of Judgement. / Thee we worship, and Thee we ask for help. /

Guide us upon the straight path. /

The path of those on whom is Thy Grace, not those who deserve anger nor those who are astray.

Those who deserve anger are the Jews, and those who are astray are Christians.

Ibn Kathir was a highly respected Muslim scholar (1301 CE – 1373 CE) credited with writing a commentary on the Koran that has been translated into several languages, including English.  This commentary titled “Tafsir al-Qur’an al-Adhim” is reported to be popular because it uses the hadiths (sayings of Muhammad) to help explain the Koran.  Ibn Kathir’s commentary explains the meaning of the last verse of the Al-Fatihah daily prayer that demeans and denounces Jews and Christians as follows:

These two paths are the paths of the Christians and Jews, a fact that the believer should beware of so that he avoids them. The path of the believers is knowledge of the truth and abiding by it. In comparison, the Jews abandoned practicing the religion, while the Christians lost the true knowledge. This is why `anger’ descended upon the Jews, while being described as `led astray’ is more appropriate of the Christians. Those who know, but avoid implementing the truth, deserve the anger, unlike those who are ignorant. The Christians want to seek the true knowledge but are unable to find it because they did not seek it from its proper resources. This is why they were led astray. We should also mention that both the Christians and the Jews have earned the anger and are led astray, but the anger is one of the attributes more particular of the Jews.” Quran Surah (Sura) Fatihah Tafsir Ibn Kathir

Remember Muslims recite this prayer over 12-17 times a day, asking Allah not to be like Christians or Jews.

Do these excerpts align with their “Common Word”?

From the Noble Koran: Sura 98

From the Methodology of Dawa 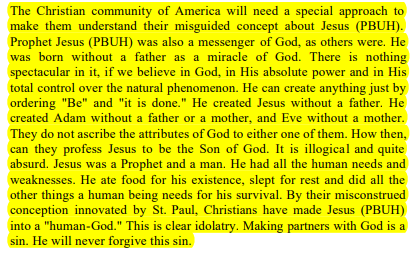 Next in Part 3: The “Christian” response to the Islamists “The Common Word Between Us and You”

1 thought on “The Interfaith Chrislam Scam..Part 2”