This series of articles will be long, and detailed, to hopefully articulate how the “interfaith” movement has led to a dangerous marriage between two religions, one whose savior is dead, and one whose Savior is alive. While there are other faiths involved with the this movement, these articles will focus on the Catholic connection.

In February 2019, the Catholic spiritual shepherd Pope Francis and Islamic Sheikh Ahmed al-Tayeb, the grand imam of Egypt’s Al-Azhar joined together to celebrate the Day of Human Fraternity. This celebration was based on the 2007 landmark alliance between the holiest Catholic and Muslim leaders spawned by a letter to the Pope titled “A Common Word Between Us and You”. 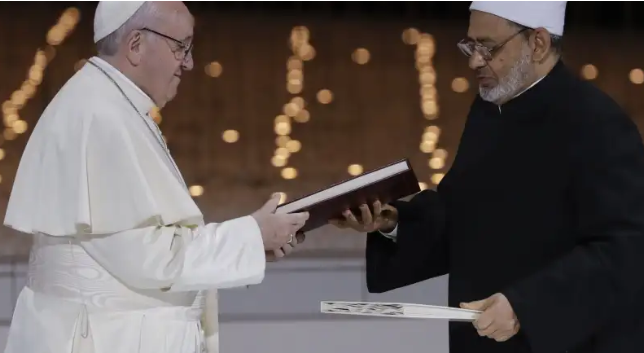 This letter was originally signed by 138 Muslim scholars and clerics from across the globe that came together historically to show the unification of all denominations of Islam. The final letter was presented at a conference held by the Royal Academy of The Royal Aal al-Bayt Institute for Islamic Thought in Jordan, with the theme “Love in the Quran”.

This document was the “common constitution” which would be the conversation openers for all interfaith gatherings to show that the teachings of the Koran and the Prophet were similar to the commandments in the Holy Bible, claiming despite their differences, both have the same edicts.

The following information explains why interfaith is a dangerous, hypocritical relationship. Words in bold are important to remember, as we will connect the dots with them as we proceed in coming parts.

It all seems so innocent. Interfaith events continue to grow in churches and synagogues across America, with the idea Muslims, Christians, Catholics, and Jews could all be friends to co-exist despite extreme differences within doctrines and laws.

To begin, we start with the doctrine of Islam. Muslims believe there is only one god, Allah, who through the prophet Muhammad revealed the words of the Koran. The traditions and sayings of the prophet are contained in the Sunnah and the Hadiths, this making the trilogy of books most important to Muslims. In order for a Muslim to be “good”, they must imitate the life of their prophet Muhammed. In summary the early years of Muhammad described as his years in Mecca, he was peaceful and while he desired to convert others to Islam, he accepted those that practiced their own religions, which led to very small numbers of Muslims.

On his hijra (journey) to Yathrib (Medina), Muhammed began to reject the offer of peaceful co-existence. It was in Medina Islam became political and militarized, showing to others Islam was meant to dominate, not to be equal. Before his death, non-believers (infidels) were evicted or enslaved and converted under the threat of death if they did not.  Remember, In order for a Muslim to be “good”, they must imitate the life of their prophet Muhammed.

In stark contrast to Islam, The Christian Faith centers entirely on the person and work of Jesus Christ, and not just certain aspects of His life. Jesus rose from the dead – spiritually and physically.

Many religious leaders including Catholics have failed to study the context of what is written in the Koran between Muhammad’s Meccan life and his Medina one. Muslims utilize the practice of abrogation, and the use of Taqiyya (sacred deception).  Islam denies the principle of the Golden Rule: the belief all human beings are equal in value and should be treated the same. No where in the doctrine of Islam does Allah speak of love or compassion for kafirs (non-Muslims). However, there are over 109 verses regarding violence against them. Here are a few:

Quran (8:12) – “(Remember) when your Lord inspired the angels… “I will cast terror into the hearts of those who disbelieve. Therefore strike off their heads and strike off every fingertip of them”

Quran (8:39) – “And fight with them until there is no more fitna (disorder, unbelief) and religion is all for Allah”

Quran (9:5) – “So when the sacred months have passed away, then slay the idolaters wherever you find them, and take them captive and besiege them and lie in wait for them in every ambush, then if they repent and keep up prayer and pay the poor-rate, leave their way free to them.”

Messages from the Hadith and Sira include more violence to non-believers:

Sahih Bukhari (52:177) – Allah’s Apostle said, “The Hour will not be established until you fight with the Jews, and the stone behind which a Jew will be hiding will say. “O Muslim! There is a Jew hiding behind me, so kill him.”

Sahih Muslim (1:33) – the Messenger of Allah said: I have been commanded to fight against people till they testify that there is no god but Allah, that Muhammad is the messenger of Allah.

Understand these verses are never discussed due to abrogation, meaning the later verses in the Koran over power earlier verse. In other words, anything revealed to Muhammad chronologically later in the Koran abrogates or overrules anything that came earlier.

Abrogation is contained in three verses in the Koran: Sura 17:106  And (it is) a Qur’an which We have divided (into parts), in order that you might recite it to men at intervals. And We have revealed it by stages. (in 23 years).

Sura 2:106  106. Whatever a Verse (revelation) do We abrogate or cause to be forgotten, We bring a better one or similar to it. Know you not that Allah is able to do all things?

During interfaith events, whenever a Muslims quotes a peaceful verse, it must be asked when it was revealed to Muhammad. In Mecca or Medina?

Taqiyya, or the art of deception (sacred deception) is a lie that advances Islam. In Islam, It is not considered a sin, but rather permissible. Renowned Islamic jurist, Imam Abu Hamid Ghazali defines this deception as “speaking is a means to achieve objectives..it is permissible and obligatory to lie if the goal is obligatory.

The question begs to be answered why would Catholic faith leaders want an interfaith dialogue with anyone that is allowed, and encouraged to lie and deceive? Lying and deception is in fact a sin to Catholics.

Coming up in Part two, a look into the letter  to the Pope from Muslims, “A Common Word Between Us and You”..