These hater groups took a break from hating conservatives long enough to turn their hate on a new law passed by the Tennessee legislature this year dealing with voter registration. The Governor signed the bill on May 2nd. These groups hate the new law because it makes it harder for them to cheat in elections.

They hate this new law so much, that within days of the Governor signing the bill which goes into effect on October 1, 2019, two lawsuits challenging the law were filed against various Tennessee election officials and the state Attorney General.

The Tennessee (super-Socialist) ACLU, sued on behalf of the League of Women Voters of Tennessee, the American Muslim Advisory Council, the Mid-South Peace and Justice Center, Rock the Vote, and Spread the Vote.

The executive director of the TN-ACLU is Hedy Weinberg. Her father was a Chicago historian and author. His obituary says that he served as president of the socialist Industrial Workers of the World (IWW) organization. Also known as the “Wobblies,” the IWW was a radical labor union started in Chicago in the early 1900’s dedicated to opposing capitalism (which may explain why members migrated to the Communist party once the Wobblies’ influence started to decline). ACLU founding member and executive director, Roger Baldwin was also a member of the Wobblies.

Weinberg’s daughter Hannah Cornfield, who grew up in the $$$$$$ Green Hills area of Nashville and attended private school, tweets out anti-capitalism messages along with support for the anti-Israel group Jewish Voice for Peace (JVP) which is one of the most virulently Jew-hating hating groups pushing the BDS campaign against the Jewish state. JVP is ranked by the Anti-Defamation League (ADL) among the top 10 “worst of the worst anti-Israel groups.” 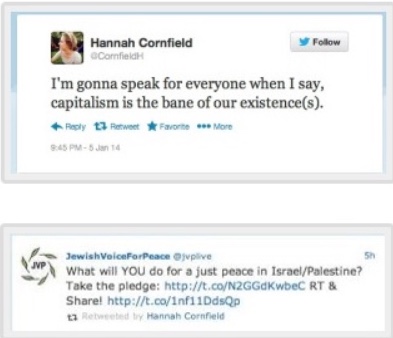 The other lawsuit was filed by a group of left-leaning law firms on behalf of the Tennessee Conference of the NAACP, Democracy Nashville-Democratic Communities, the Equity Alliance and The Andrew Goodman Foundation. One of the law firms is Hogan Lovells, the firm where Samar Ali launched her legal career. During her employment she helped establish the firm’s Abu Dhabi office working on sharia finance compliant transactions. During the time Samar worked at Hogan Lovells, the firm’s website had a lengthy and laudatory explanation about “Islamic Finance.”

It’s important to remember that voter registration fraud and voter fraud are considered legitimate resistance tools by the left.

Remember the ACORN convictions for voter registration fraud? “[A]t least 54 ACORN employees and individuals associated with ACORN have been convicted of voter fraud. Voter fraud is a blanket term coined by lawyers. It refers to fraudulent voting, identity fraud, perjury, voter registration fraud, forgery, and a variety of crimes related to the electoral process.”

One of the issues that came out in the multi-state ACORN investigations involved workers being paid based on the number of people they registered to vote. During the 2009 investigations including one in Nevada, its Secretary of State was quoted in a NYT’s piece – “[u]nder Nevada law, it is illegal to attach incentives to such work, in part because it encourages canvassers to submit fraudulent forms.”

This is the kind of stuff covered by the new Tennessee law.

So why do the groups who are suing object to a law that requires timely submission of truthful and accurate voter registration forms?

Well, it wasn’t that long ago that AMAC founding member and Jew-hater Drost Kokoye, who also worked with AMAC’s sister organization the American Center for Outreach (ACO) “took liberties” with applications during voter registration drives at the local mosques: 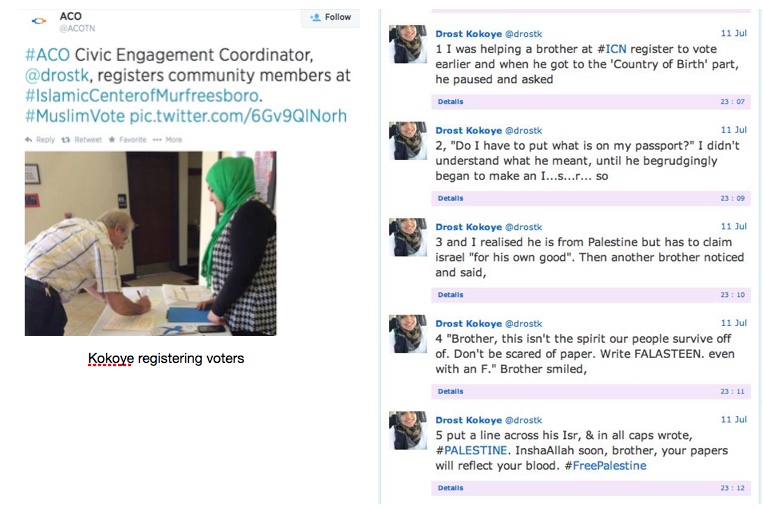 Rumor has it that Kokoye is getting a law degree soon. Clearly an ACLU lawyer in training.