A lawsuit filed in 2008, against CAIR by patriot lawyers from the American Freedom Law Center was settled today to the benefit of five Muslim victims of a massive fraud perpetrated by CAIR:

“The lawsuit began after CAIR hired for its Virginia offices a fake lawyer, Morris Days, who defrauded dozens if not hundreds of CAIR clients.  Once the fraud began to unravel, CAIR engaged in a massive cover-up, closing down the Virginia offices, firing the lawyer, and claiming to the CAIR victims that Days was not actually a CAIR lawyer. As alleged, CAIR knew of this fraud and purposefully conspired with Days to keep the CAIR clients from discovering that their legal matters were being mishandled or not handled at all.”

This should settle the question of whether anything CAIR says or does is credible. The moral of this lawsuit – don’t believe a word CAIR says. This Muslim Brotherhood/HAMAS front group has one goal for the U.S. – civilization jihad, and it looks like they will do or say anything in pursuit of the Islamist agenda. Don’t ever forget that CAIR is a named unindicted co-conspirator in the Holy Land Foundation trial, the largest and most successful terrorism financing prosecution in U.S. history.

CAIR was named an unindicted co-conspirator because of its connectedness to HAMAS, a U.S. designated terrorist organization.

Prior to co-founding CAIR, executive director, Nihad Awad was the President of the Isalmic Association for Palestine (IAP), an organization named by the Muslim Brotherhood in their 1991 Strategic Plan for North America, as one of their organizations. Documentary evidence supports that the Islamic Association for Palestine was the HAMAS propaganda arm in the U.S. So it’s no great surprise that Nihad Awad has publicly stated his unequivocal support for HAMAS.

In 2009 when CAIR tried to get its unindicted co-conspirator status removed, a federal judge ruled that “ample evidence exists tying CAIR to HAMAS.”

CAIR has repeatedly tried to exert its influence in Tennessee to either stifle our First Amendment right to free speech or to collaborate with its allies like the TN American Muslim Advisory Council (AMAC).

In 2011, Kurdish refugee agitator Remziya Suleyman, working for the TN Immigrant & Refugee Rights Coalition (TIRRC), brought one of CAIR’s lead attorneys, Gadeir Abbas to the Tennessee capitol to speak against the material support anti-terrorism bill. Suleyman was later instrumental in helping to get AMAC and its sister group ACO (American Center for Outreach), organized.

The Tennessee legislature was trying to expand the criminal code on terrorism after Memphis jihadi Carlos Bledsoe, aka, Abdulhakim Mohammed, the first African-American born citizen to commit a successful terrorist act on U.S. soil, had murdered Pvt. Andrew Long at the Little Rock Army Recruiting Center.

In 2012, CAIR Executive Director Nihad Awad, a public supporter of HAMAS, a U.S. designated terrorist organization, showed up for the opening of the Islamic Center of Murfreesboro. 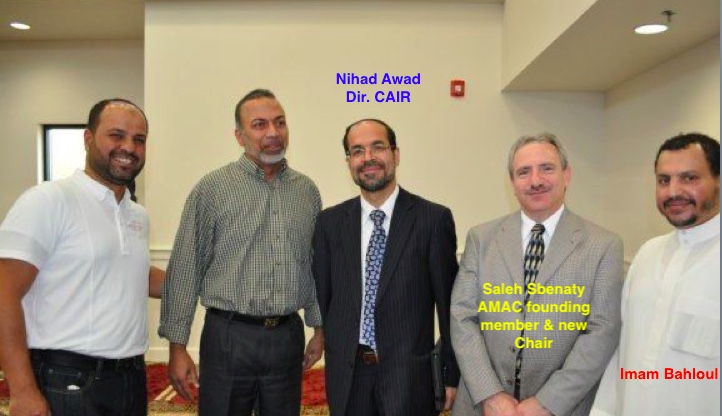 In 2014, CAIR tried to shut down a Knoxville ACT for America event using the local high school auditorium which organizers had reserved for after school hours. The program featured Tennessee’s Bill Warner speaking about political Islam and the encroachment of sharia law in America. CAIR successfully pressured the Knoxville school district to cancel the use of its facility for the program.

During the 2018, Tennessee gubernatorial primary season, CAIR “working with our allies here on the ground in Nashville, AMAC,” using its typical name-calling, bullied weak-kneeded Trevecca University into canceling Mae Beaver’s event featuring John Guandolo, Bill Warner and Cathy Hinners. No doubt CAIR was afraid of what the trio would expose about the Islamist political agenda.

Back to the current lawsuit….

After the lower court in the CAIR fraud suit ruled that the trial would go forward, Robert Muise, co-founder and senior counsel of the American Freedom Law Center that sued CAIR nailed the real reason CAIR works overtime to shut down any fact-based, truthful discussion about political Islam, the Muslim Brotherhood and the advance of sharia law in the U.S:

“This ruling sets the stage for a trial CAIR simply cannot afford.  We fully expect CAIR to play the victim as a Muslim civil rights organization.  But once that door is opened, we will present expert testimony that CAIR is in reality not a civil rights organization but rather a Muslim Brotherhood/Hamas front group committed to, what it terms, ‘Civilization Jihad.’  Given CAIR’s pedigree and mission, it is no wonder that the organization was prepared to deal corruptly with its own Muslim clients in an attempt to cover-up a massive fraud made possible by its own attorney and staff.”

AMAC is CAIR’s ally and boots on the ground in Tennessee. AMAC’s leader since 2012, Zulfat Suara, recently stepped down from that role to run for an at-large Metro Nashville Council seat. It’s safe to assume that if elected, CAIR will have its very own proxy embedded in the Metro Nashville government.

Saleh Sbenaty, who helped establish AMAC is now serving as its leader. At the time of CAIR’s visit to the Islamic Center of Murfreesboro, Sbenaty was serving in a leadership role at the mosque.