Breaking today is a report that over 500 Kurds have been smuggled into Kurdistan from Iran to evade the 14-day quarantine imposed because of the outbreak of coronavirus in Iran:

“Iran has become the Middle East epicenter of the outbreak of the virus, with the latest official figures standing at 245 infections and 26 deaths. Iraq has so far confirmed 6 cases of coronavirus, 5 of whom were among Iraqis who had recently visited Iran.”

Both Sen. Marsha Blackburn and Governor Lee have been adamant about their commitment to the Kurds.

Governor Lee says he won’t “turn his back” on Kurds he claims “walked alongside and fought alongside our soldiers.” This was one of his reasons for consenting to continuing refugee resettlement in Tennessee and ignoring explicit instructions in the President’s Executive Order.

Marsha also believes U.S. taxpayers are beholden to Kurds who claim they were in some way connected, however loosely or remotely, to America’s fight against ISIS. Marsha is so convinced of the need to reward these Kurds that she is co-sponsoring a bill to fast track their arrival to the U.S. whereupon they can qualify for all types of public assistance programs.

A leaked State Department memo indicated that the administration was opposed to Marsha’s bill for a variety of reasons including a concern about super-accelerated vetting, which the State Department wrote, “fails to accommodate vital national security screening.”

Serious questions should be raised about admitting Kurds, Syrians or Iraqis in the face of the region’s outbreak of coronavirus.

Along with that, it seems reasonable to question an individual’s patronage of the “bustling” Hitler Restaurant in Duhok, the capital city of the Kurdistan region. 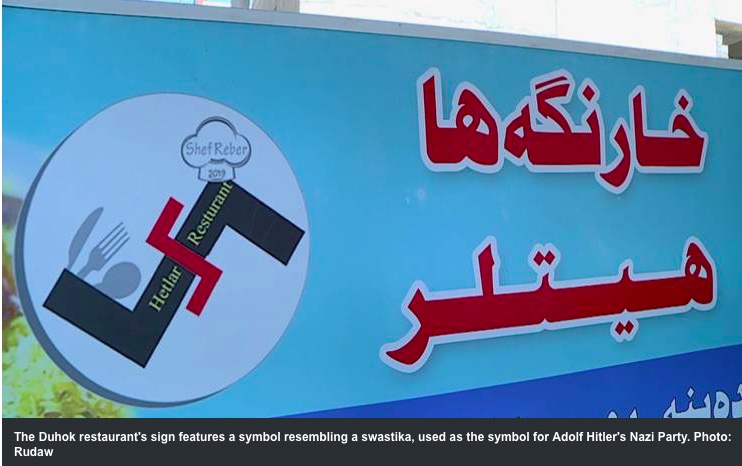 The restaurant, opened in 2018, kept the Hitler name until deputy head of the Legal Committee in the Kurdistan Parliament, objected. The basis of his objection was not that the restaurant was named for Adolf Hitler, the evil genocidal socialist who murdered, through execution and cremation, over 6 million Jews. No, the legislator’s objection was based on not wanting to offend Germany because “[w]e have to take into account the fact that Germany helped us in the fight against Daesh [ISIS].”

The head of the [Duhok Chamber of Commerce] said that while Hitler may be reviled in Europe, people in the Kurdistan Region are not concerned about him.

“Maybe for the German nation and Europe who suffered a lot under Hitler, it will not be accepted or welcomed,” Ayad Hassan told Rudaw. “But for this region, it will not be an issue to [name a business after] someone who has done good or bad things in history.”

Other Kurds said “it is better to have a restaurant named after Hitler than an alcohol shop.”

As much as the restaurant owner and others interviewed downplayed the Hitler Restaurant name, it was reported in 2018, that Jews remaining in the Kurdistan region “keep their Jewish identity hidden for fear of persecution.

Even though Nashville Kurdish refugee Drost Kokoye arrived in the U.S. as a young child and was raised here, she has put her hatred of all things Jewish on full display using social media, anti-Jewish campus groups, and pro-HAMAS rallies.

It’s seems reasonable to question why Marsha and Bill Lee insist on romanticizing the Kurds considering the other baggage they’ve brought to Tennessee.

1 thought on “Should Kurds Who Smuggled Across Borders to Evade Coronavirus Quarantine or Patronized the Hitler Restaurant Be Admitted to US?”