The Council’s director of legislative affairs advised her that it’s the state legislature’s job to define and set penalties for crimes and criminal behavior.

At Tuesday’s Council meeting a “late-filed” ordinance was presented. Given the contents and objective of this bill, it’s more likely that it was not timely filed so as to avoid public pushback …. or maybe state pushback.

As of this writing, the ordinance, which passed on first reading, has not been posted to the Metro government website but it’s not too hard to guess who the sponsors might be. What is known is that power-grabber and illegal alien protectionist Council member Bob Mendes, is a co-sponsor. This is the same Bob Mendes who back in 2017, sponsored a bill that had it passed, would have made Nashville the most liberal sanctuary city in the country, ie, illegal aliens committing crimes would be protected from deportation.

Mendes is the prime architect and sponsor of the 34% property tax increase passed by the Metro Council. He is assembling a record to run for mayor or Congress.

This new bill would allow Metro employees from pretty much any department to issue citations to anyone not wearing a mask. 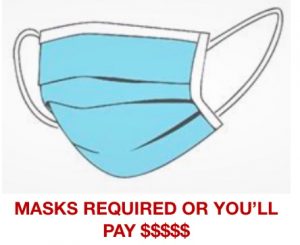 Talk about abusing power under the cover of COVID. It’s also about enforcing the edicts of Nashville’s mayoral tyrant so that his subjects behave according to the little man’s orders.

The more you look at the actions of Nashville mayor John Cooper and the Council, the more it looks like they are carrying water for the Biden-Harris ticket. While Nashville is not currently being lit on fire by BLM Marxists, Cooper is pretty much on par with comrade NYC’s DiBlasio in taking down a once economically thriving city despite Cooper permitting hookah bars and strip clubs to stay in business.

From the start of COVID in Tennessee, Bill Lee said Metro Nashville could do whatever it wanted to manage the public health issue. Cooper’s “management” has Metro Nashville losing an estimated $100 million dollars weekly.

Lee’s lack of leadership is also costing the state millions. Davidson County is pretty much the cash cow for the state’s different tax collections which ultimately effects all Tennessee taxpayers.