Once again, an organization claiming to have strong Christian values succumbs to social pressure causing many Christian customers to doubt their validity or sincerity.  Chick- Fil- A, who recently fell to pressure from the LGBTQ community by stopping donations to charities like the Salvation Army that stand for traditional marriages, now has more issues.

According to a statement released by the Family Research Council’s President, Tony Perkins, Chick-Fil-A donated $ 2,500 in 2017 to the anti-Christian Southern Poverty Law Center (SPLC).  Perkins states  “Tax reports have now exposed Chick-fil-A for funding the anti-Christian Southern Poverty Law Center; an organization linked in federal court to domestic terrorism after their smear campaign of Christian organizations resulted in a shooting in which the gunman planned to smear Chick-fil-A sandwiches in the faces of his victims.  Not only has Chick-fil-A abandoned donations to Christian groups including the Salvation Army, it has donated to one of the most extreme anti-Christian groups in America.”

Another organization Chick- Fil- A has donated to is the uber liberal “Teach For America. TFA claims on their website to be “actively recruiting” illegal aliens who have been granted temporary deportation through the unconstitutional DACA program. After one month of TFA summer training the “DACAmented teacher” can be placed in a Tennessee public school. 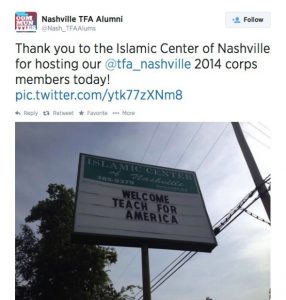 It should be no surprise then, that in June of 2018, we here at Dailyrollcall.com uncovered that Chick-Fil-A was providing halal (permissible) chicken to the Muslim Brotherhood front group the Islamic Society of North America. ISNA isn’t the only Muslim Brotherhood group to claim that, the Muslim Student Association at Virginia Common Wealth University also suggests the Chick-fil-A on their campus sells food Muslims can eat. Several attempts were made to confirm or deny the issue regarding halal food, however Chick-Fil-A never responded to our phone calls or emails. 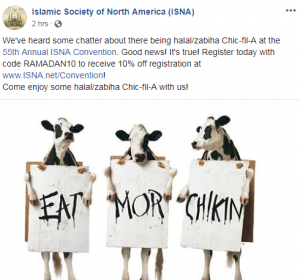 Perhaps one reason CFA is having these troubles is due to the hiring of leftist Rodney Bullard, the current Vice President of Community Affairs at Chick-fil-A,Inc. and Executive Director of the Chick-fil-A Foundation. Bullard was a fellow in the Bush Administration, but he was also an Obama donor, and in 2016 donated to Hillary Clinton’s campaign.

Bullard being in the position to determine where contributions go, seems to be very comfortable giving to groups such as Atlanta’s  Westside Future Fund, a project of the Atlanta Committee for Progress together with former Mayor Mohammed Kasim Reed.  Some of the other social justice recipients include $25,000 for UNICEF, $20,000  to the Latino Leaders Network,  $20,000 to the Harvard Debate Diversity Network, $45,000 to the King Center for Nonviolent Social Change, and $5,000 was allotted to Friends of Refugees. All left leaning non profits.

The blame can’t fully be placed on Bullard though. Being hired in 2011, it should have been a red flag that Christian organizations were no longer receiving grants, and liberal, social justice ones were. Where is the founder and CEO Dan Cathey? If Chick-Fil-A wants to stay in business, or at least claim their Christian values, it may behoove them to replace Bullard. Good luck with that.