To many, the word diversity means embracing the cultures and faiths of those who have made America its home. But in reality, these days diversity is the elimination and dismissal of Americas culture, which is now promoted as white supremacy, nationalism, and of course Islamophobic.

For 8 years, under the Obama administration, the words Merry Christmas were almost erased as Muslims found it offensive, and not inclusive. While President Trump has instilled the confidence to be able to say Merry Christmas without causing chaos, or guilt, Muslims are still determined to infect schools with their all-embracing rhetoric.

One Muslim group determined to bring Islam into your child’s classroom is the Islamic Network Group (ING) which is based in San Jose CA.  Don’t get comfortable thinking because it is in California it doesn’t affect your school district, it does. Even in the Buckle of the Bible belt, Islam has invaded classrooms in Tennessee, as ING has a speaker’s bureau in Nashville.

Because Muslims believe their faith is superior, they demand inclusiveness under the guise of diversity. Now that the Christmas season is approaching, ING has sent out their suggestions to schools across the country, in hopes teachers will use them.

Despite there is no Muslim Holiday in December, Muslims still insist Islam and their holidays are discussed, as well as other days celebrated around the world. 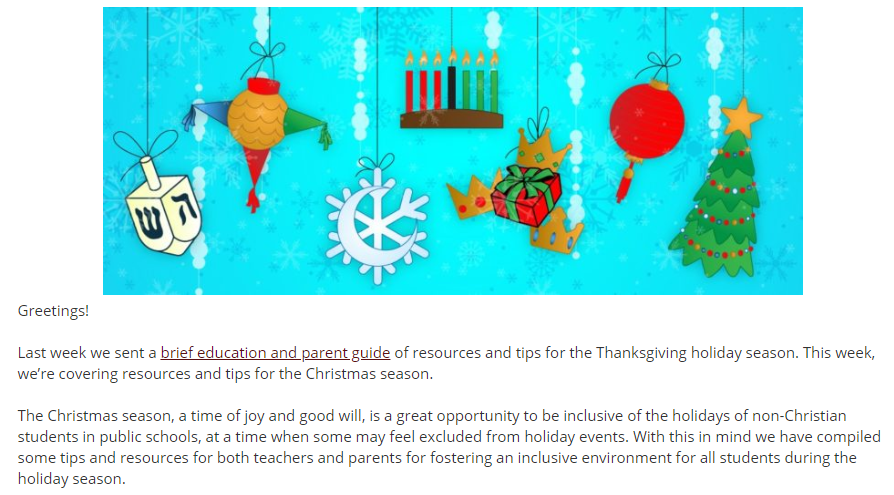 From the ING Resource on Holidays

Some may argue making “non- Christian” students feel included in celebrations is important, but the underlying message isn’t about non Christians, its about Muslims. Why should Muslims have to be exposed to holidays other than their own. Do Muslims incorporate Christmas or Hanukkah into their month of  Ramadan? No. Do Christians and Jews demand their holy days be included in Muslim Schools so that Muslim Children learn about other faiths and their celebrations? No they do not.

In America, in December specifically, there are Christian and Jewish Holidays. But that is a “dilemma” to many. This screenshot is from Teaching the Holidays: The December Dilemma.

You get the point. Once again, Islamists and their apologists demand inclusiveness by Christians and Jews, yet fail to demand the same from Muslims. It’s not “Happy Holidays”, it’s Merry Christmas and Happy Hanukkah. Period.