Up until Briley lost big in his Nashville mayoral race on Thursday night, he and Hagerty were using the same fundraiser and political consultant, a young woman named Kim Kaegi.

Kaegi jumped on the Briley team before Hagerty announced – a fact that would likely would have been known to experienced politicos Hagerty and Ward Baker who is running Hagerty’s campaign. And before Briley, Kaegi was on the payroll of the self-disgraced super radical, former mayor Megan Barry.

The optics of this may only bother the little people like the voters, not those who consider themselves above all those little details. After all, isn’t it always about “bipartisanship”????? 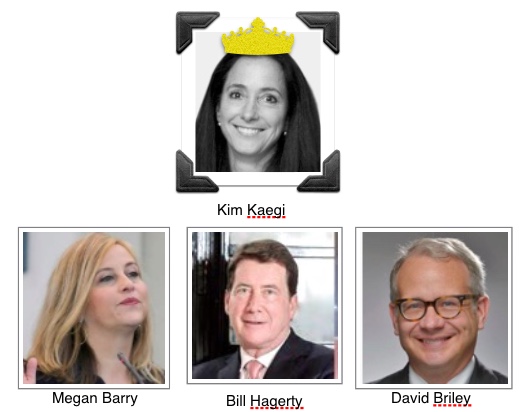 That’s an announcement not likely to make Tennessee conservatives feel all warm and fuzzy nor want to support Hagerty for Lamar’s Senate seat.

Talk about tone-deaf when it comes to Tennessee conservatives.

No one should be surprised about McConnell’s endorsement which is just a product of swamp politics. Ward Baker is close to swamp buddy McConnell. Baker has served as a political advisor to McConnell and for a time, was the executive director for the National Republican Senatorial Committee.

Hagerty has WAY more baggage than Baker’s other Senatorial campaign winner, Marsha Blackburn. Piling on endorsements – even from Trump – is not likely to distract Tennessee conservatives from seeing what Hagerty is really about.

Hagerty describes himself as conservative family man in his campaign launch video. If he was telling the truth, he’d admit to being a political opportunist whose allegiances at the end of the day will be to elitist establishment globalists who he’s counting on to get him elected.

After Haslam appointed Hagerty to ECD Commissioner, Hagerty used his position to benefit Lamar Alexander’s son and daughter., He promoted Lamar’s son Will Alexander, to chief of staff at ECD. Before leaving ECD, Hagerty hired Lamar’s daughter Leslee to work for ECD.

And being the political opportunist that he is, Hagerty signed on as a Jeb! delegate and only flipped to Trump after he won the primary.

And Hagerty political resume would be complete without again mentioning his role in Mittens Romney’s presidential campaign.

Starting to see a pattern of political allegiance?

The other big “gift” that Hagerty bestowed on Tennessee was hiring sharia finance specialist Samar Ali after her father called and asked Hagerty to take a look at her resume. Did Hagerty even bother to look at other resumes – you know, from just regular Tennesseans who didn’t have Hagerty’s cell phone number?

Samar’s father Subhi Ali has been chairing the board of the D.C. based Israel and Jew hating organization Jerusalem Fund, since 2005. Before becoming the chairman, he served as vice-chair alongside the Fund’s founder Hisham Sharabi, a prolific writer who glorified Arab terrorists.

Under Subhi Ali’s leadership, the Jerusalem Fund has hosted speakers who deny Israel’s right to exist, promote the Boycott, Divestment & Sanctions (BDS) campaign against Israel, and attempt to deconstruct the narrative of HAMAS as a terrorist organization.

Samar Ali served as treasurer helping Zulfat Suara, chair fo the American Muslim Advisory Council (AMAC) from 2012 – 2019, get elected to the Metro Nashville Council. Suara is an ardent admirer of anti-Israel Muslims in Congress Ilhan Omar and Rashida Tlaib and under her leadership the AMAC signed onto TIRRC’s illegal immigration agenda for Nashville.

Putting Hagerty in a U.S. Senate seat means everyone from the globalist and big money Tennessee Republicans to his cell phone buddies, will have access. It will be Tennessee’s conservatives left standing outside the door.