Nashville’s Fox17 has a long history of pandering to the Islamist community in Nashville and helping them to disseminate intentionally misleading information.

Turns out however, that the pamphlet’s content was verified by multiple Middle East sources and Hillary Clinton, as being accurate. 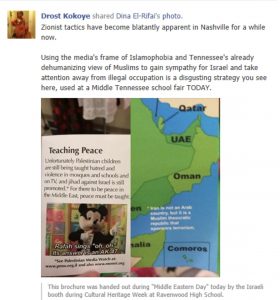 This past Easter Sunday Fox17 ran a piece by “reporter” Anthony Glover titled “Muslims in Nashville receive vaccination in show of equal distribution of vaccine.”

Turns out this Fox17 piece is likewise without any factual basis. The FACT is that as of March 31, 2021, any resident of Davidson County over the age of 16, can get a COVID vaccine. In FACT, people can even go to certain pharmacies and get the free vaccine.

Sabina Mohyuddin, executive director of the hyper political organization AMAC herself admits that Muslims in the area are “hesitant” to get the vaccine, accounting for the low numbers in the Muslim community.

Sadly for anyone who watches or reads Fox17 “news” reports, the FACTS do not support the husband and wife (?) propaganda team’s disinformation campaign.

In December 2020, months before either of the Glovers’ stories, Dr. James Hildreth, president and CEO of the historically black Meharry Medical College in Nashville, admitted that distrust of the vaccine accounts for the low COVID vaccination rates among minorities. is because they don’t trust the vaccine.

If either Glover wanted to report factually instead of trying to create a narrative of health-related racism, they could have reported about the on-going efforts by a group called Tennessee Stands which has been leading efforts to have freedom of choice regarding the COVID vaccine.

But in the agenda driven media, everyone knows that non-minority groups wanting to not be forced to take the COVID vaccine, doesn’t fit the leftist media narrative.

From its very beginning, AMAC, betted by the media, has spewed deceit and misinformation to the general public and to the Muslim community they claim to represent. Coincident with AMAC organizing, its founders, with help from the media, knowingly and deliberately issued distorted and untrue statements about a bill introduced in the state legislature.

The anti-terrorism material support bill specifically said that it only applied to individuals deliberately supporting the commission of a terrorist act and specifically stated that it did not apply to “the peaceful practice of any religion.”

The bill defined the term “sharia,” precisely the way jihadist terrorists defined it because this was a bill to prevent terrorist acts by cutting off sources of support. The bill, now a state law, prohibits using religious justification as a defense. This is the very same argument made by self-declared peaceful followers of Islam, to wit, that terrorist acts committed by ISIS jihadists or others in the name of their religion, does not represent Islam and that these terrorists are not true followers of the religion.

And yet, in keeping with standard leftist tactics, Islamist agitators and AMAC organizers, with no basis in fact, told members of their communities that legislators were trying to make following sharia a felony in Tennessee. Had AMAC organizers had any respect for the truth, they would have had to admit that supporters of this bill were actually trying to insulate peaceful religious observers from being lumped in with violent religious extremists.

As to the COVID vaccine – it’s about CHOICE, not equity.