Former governor and never-Trumper Bill Haslam handed over $20+ million of Tennessee taxpayer dollars to get Alliance Bernstein (AB), a NYC investment management and research firm, to move its new corporate headquarters to Tennessee.

The move of course was to Mayor David Briley’s leftist Nashville since no self-respecting NYC transplant could possibly live someplace that didn’t have a Starbucks on every corner, organic food markets, or the trendiest restaurants.

While Haslam couldn’t conceal the $20 million fast track grant, the actual total of tax incentives for the AB deal were not disclosed, but months later, the Nashville Metro Council added their own $3.68 million dollar incentive package to lock in the AB deal. Regardless of the dollar and social cost (to be discussed below), both Lamar and Corker couldn’t heap enough praise on Haslam for bringing in more Yankees who want the benefits of living in a no-state income tax state.

“”Moving our corporate headquarters here allows us to offer advantages to our employees that we simply couldn’t in the New York metro area,’” president and CEO Seth Bernstein, said during a press conference. He noted lower living expenses, taxes and housing costs, shorter commute times and a more modern work facility.” https://www.cnbc.com/2018/05/02/alliancebernstein-is-moving-to-nashville-from-manhattan-to-save-money.html

Along with AB’s promise to create 1,000 jobs, they also promised to spread philanthropic dollars in the city they planned to call home.

How AB’s philanthropy is being spread around Nashville is hard to document. But what is known, is that AB Vice-President, Daniel Weisman is serving as a board member of the Nashville-based Equity Alliance.

Founded in 2016, The Equity Alliance, a 501(c)(3) non-profit, employs state-wide and community organizers, communications and operational managers along with two co-executive directors. This group organizes around issues of alleged police brutality, equity for people of color, and like every other far left group, maintains a 501(c)(4) arm which is working to vote Trump out of office and elect progressive socialists. 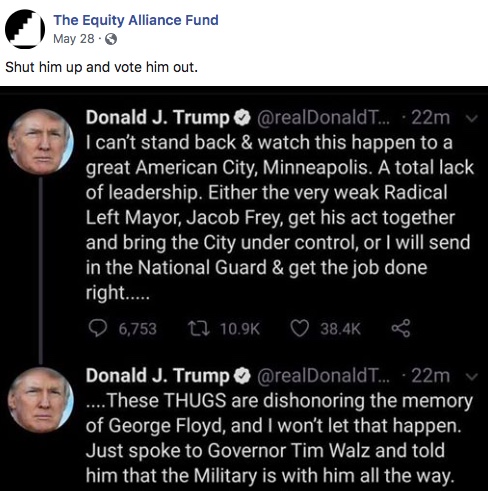 The Equity Alliance’s 501(c)(4), Equity Alliance Action Fund, is a member of the Nashville Justice League coalition (NJL) along with TIRRC Votes, the affiliate of (the Soros-funneled money) TN Immigrant & Refugee Rights Coalition which advocates for illegal aliens and legal immigrants like refugees, and the Central Labor Council of Nashville & Middle TN (AFL-CIO).

The NJL formed a PAC shortly before the August 2019 election for the Nashville Metro Council with the goal of moving the city council further left. The NJL’s true intentions were exposed in the July 2019 Liberation Road Newsletter. Liberation Road is the continuation of Freedom Road Socialist Organization (FRSO). The name was changed to Liberation Road at the group’s national congress in April 2019. FRSO is well-seated in Tennessee; the co-director of the Highlander Research & Education Center, the socialist training school just outside of Knoxville, is a longstanding participant with the FRSO.

Given the NJL’s core mission there is no surprise about the candidates they endorsed. 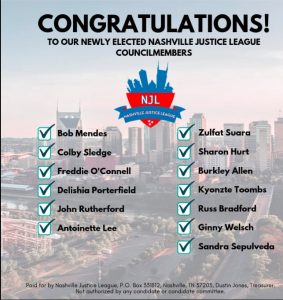 For example, Bob Mendes and Colby Sledge were the council members who in 2017, introduced two bills that if passed, would have made Nashville the most liberal sanctuary city in the country. Sledge is married to Lindsey Harris who until very recently, was a co-director of TIRRC.

The NJL also endorsed Zulfat Suara who resigned her leadership of the TN American Muslim Advisory Council (AMAC) to run for the Metro Council. From the comfort of her new $650,000 home, Suara served as one of Bernie Sanders’ three Tennessee campaign co-chairs. Under Suara’s leadership, AMAC joined forces with Linda Sarsour, one of the most vocal anti-Semites in the U.S., featuring Sarsour at different AMAC events. Sarsour served as “Bernie Sanders’s Anti-Semitic Surrogate”.

Kyontze Toombs, who serves as Secretary and General Counsel for the Equity Alliance was endorsed and won her Metro Council race so they now have a front row seat at the table.

Gicola Lane, another NJL endorsed, but losing candidate, was paid by Black Voters Matter as a campaign coordinator in getting the anti-police Community Oversight Board on the ballot and passed. This year she is an electoral justice fellow with the Movement for Black Lives, the policy setting umbrella organization.

The same co-director of the Highlander Education Center who is a long-standing participant with FRSO, is also a member of the policy table leadership team of the Movement for Black Lives.

As to Alliance Bernstein, it didn’t take long for the company which is ranked fifth among Nashville’s largest private employers, to try and use its economic weight to influence the Tennessee General Assembly’s work. In 2019, AB joined a chorus opposing several bills which they, Taylor Swift, Amazon, the Equality Project and the Nashville LGBT Chamber of Commerce claimed discriminated against the LGBT community. Guess they don’t care about “Q.”

Tennessee politicians and their appointees continue to pour state taxpayer funds into Nashville. Between 2015 and 2020, the state has given Metro Nashville $99,581,919 in fast track economic development grants supporting more than 70 projects. Rewarding the out-of-control and irresponsible spending of the Nashville city government didn’t stop with the state’s FY2021 supposed COVID-driven austerity budget which directed $5 million to the San Fran on the Cumberland.

As to the can’t-figure-out-how-to-do-the-governor-job Bill Lee, he is blindly following along, thanking AB for its “ongoing commitment to Nashville and to our state.”

Is this really worth the price we will pay?