The federal contractor met with Lt. Gov. Randy McNally shortly after the President issued his Executive Order on refugee resettlement. NICE is trying to convince Tennessee state leadership to reverse course, say yes to the business of resettling refugees in Tennessee and help federal contractors like NICE heal their sagging budgets. 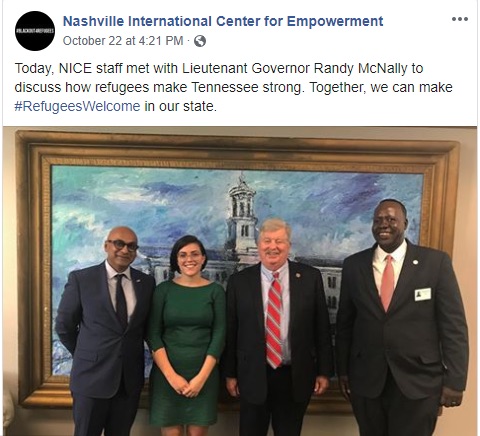 NICE probably has a much better understanding of the willingness of the Lee administration and weak-kneed Republicans who are willing to sell out trusting Republican voters in the face of $$$$$. Governor Lee recently said he hasn’t made up his mind about whether to consent to resettling refugees in Tennessee.

That’s money and economic development like the kind Tyson Foods with sales in 2018, of $40 billion dollars and which is building its 5th plant in Tennessee. That’s the same company that helped make Shelbyville an employment magnet for Somali refugees.

But don’t fall for the idea that the Trump EO on refugee resettlement makes the lawsuit unnecessary, because it won’t stop refugees from being resettled in Tennessee.

Remember, the lawsuit is not about refugees. It’s about the federal government forcing Tennessee to spend state revenue for the resettlement program even though the state withdrew from the program over 10 years ago. The lawsuit is about state sovereignty and the Tenth Amendment – it’s about any federal program that the federal government decides it will have states subsidize even if they don’t want to and even if they don’t receive any federal money or benefit in return.

In Tennessee, World Relief closed its Nashville office after taking the money but not before it dumped refugees in Murfreesboro without providing the services.

No doubt NICE is doing whatever it can to avoid the same fate.

NICE, started by a former refugee, was founded in 2005 as an ethnic assistance organization originally named the Sudanese Community and Women’s Service Center. NICE matured into a full-fledged refugee resettlement contractor in 2011, and it’s financial profile changed pretty dramatically with the infusion of federal cash:

After federal money begins to flow and dominates the percent of total budget:

No doubt NICE has pitched the usual leftist propaganda about the economic benefits of cheap refugee labor to Lt. Gov. McNally. Republicans have always understood that helping their big corporate cronies like Tyson get out of the quagmire of cheap illegal alien labor is answered by the cheap legal labor pool of refugees.

Even if it means pushing the cost onto everyday Tennesseans. Oh yeah, and then there’s the displacement of disabled and sick Tennesseans who still are waiting for TennCare help, but which refugees who meet eligibility can get as soon as they arrive.

And then there’s Bill Hagerty…..

Shortly after Haslam appointed Bill Hagerty to be the Commissioner of Economic & Community Development (ECD), Hagerty made Lamar’s son, Will Alexander ECD’s Chief of Staff.

During Will’s tenure with ECD, he served on NICE’s board as Treasurer as a representative of TN ECD while at the same time, NICE’s President & CEO, Gatluak Thach was on the Board of TIRRC alongside the co-chairs of Governor Haslam’s Muslim Advisory Council.

In 2016, ECD had Wolfgang Roeder, an ECD business consultant, serve on the NICE board. Wolfgang’s job was to “help with any expansion projects, access to ECD grants and to Tax credits.

Perhaps Lt. Gov. McNally and Governor Lee need to hear from the everyday Tennessean who isn’t getting propped up by the federal government money?

Don’t leave the new Speaker of the House, Cameron Sexton, out of the conversation:  speaker.cameron.sexton@capitol.tn.gov

One other thing – you might want to tell these Republican leaders that these groups they seem to anxious to accommodate didn’t put them into office – Tennessee Republican voters did and it’s been documented over the years that immigrants tend to vote Democratand no amount of Republican appeasement is going to change that.

These Republican leaders need to understand that continuing to sell out Tennessee conservatives based on perceived economic gain, might serve their political ambitions, but in the long-run, will lead to our demise