The women’s movement occurring in America today is a fraud. What it should be called is the leftist, progressive, socialist, Islamist  women’s movement, and unless you are a woman in that category, you are out. Today, let’s look at the Muslim female activists role. Wait, under the doctrine of Islam, women are oppressed, and are considered second class citizens, so surely any “activism” would not be tolerated. In Islam women are not equal to men.

From the Hadiths and Sira:

Al-Tirmidhi 3272 – “When Allah’s Messenger was asked which woman was best he replied, ‘The one who pleases (her husband) when he looks at her, obeys him when he gives a command, and does not go against his wishes regarding her person or property by doing anything of which he disapproves’.”

Sahih Bukhari (6:301) – “[Muhammad] said, ‘Is not the evidence of two women equal to the witness of one man?’ They replied in the affirmative. He said, ‘This is the deficiency in her intelligence.”

So, as we see more and more Muslim women publicly promoting womens issues as they exist in America, it’s not feminism, it is called Dawa, or the invitation to join Islam. Dawa is a religious duty for every Muslim to perform. So what does Dawa have to do with the women’s movement? Taqiyya, or the art of deception. Women in the role of an activist have one goal, to make others believe Islam is the only religion, and Allah the only creator.

Keep this in mind as we fast forward to May 2018. In the city of Nashville TN, a black woman, Carol Swain, a former professor at Vanderbilt University is running for mayor. Carol Swain, is intelligent, articulate and has the character to faithfully execute the position she is running for. She is also a Christian. The first week of May, a women’s organization, “Women in Numbers” endorsed Ms. Swain, agreeing she was highly qualified for Mayor.

According to the Women in Numbers website, they claim:

On May 6, 2018, the Women in Numbers organization withdrew that support, and Carol Swain had this to say on social media:

“This weekend, without reason, the ‘non-partisan’ organization Women In Numbers rescinded their nomination of my candidacy for Mayor. My team has since made many attempts to contact WIN, however, they have not returned our request for information about how and why the decision was made.

We have spoken with several sources within WIN, who have requested anonymity because of fear of retribution. The sources have stated that WIN rescinded the endorsement under pressure and for political reasons. This is just another example of the state of politics in Davidson County and in our country.

We are not deterred by Women In Numbers’ decision. I will continue to fight for the right of all Nashvillians to live and work in a safe and affordable environment.” – Carol M. Swain

Interesting. Probably one reason they rescinded, and do not wish to discuss is who part of that pressure came from. The American Muslim Advisory Councils (AMAC) Chair woman..Zulfat Suara, a self proclaimed woman activist, who had this to say on social media: 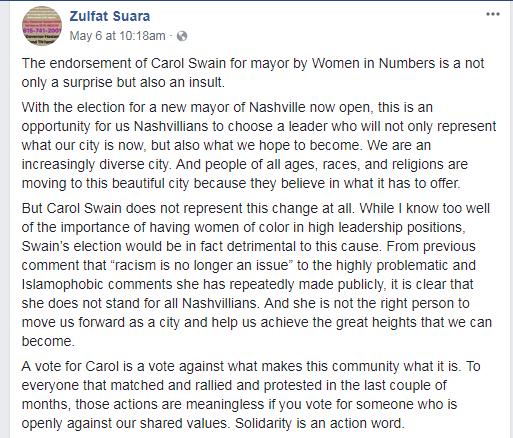 So why did Ms. Suara state this? Because of an article Ms. Swain wrote which included some remarks about Islam. This is fact. The majority of Islamic organizations within the United States are Muslim Brotherhood front groups. The dangers of radical Islam, are in fact a danger to our children. The question  is why do Muslims like Ms. Suara not want to protect America from radical Islam? With the threat of radical Islam rearing its head in the form of terrorism, why would Ms. Suara and her group AMAC not agree with Ms. Swains statement? 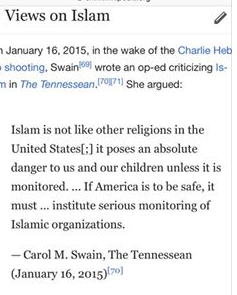 Ms. Suara then thanked those that had emailed or called WIN to express their outrage over their support for Ms. Swain

This is what the American Muslim Advisory Council (AMAC) does. They will deny their involvement, but once the smoke settles, they will acknowledge they participated in the campaign. Just as they did in Feb of 2018, as then candidate for Gov, Mae Beavers attempted to hold a Homeland Security Summit, which was abruptly cancelled because AMAC labeled the speakers “Islamophobes”. 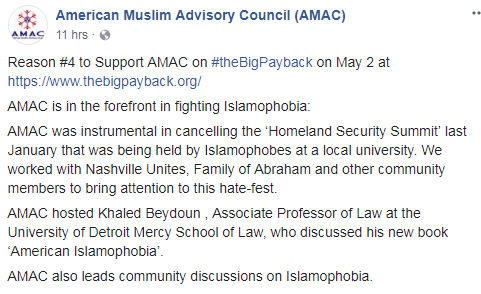 AMAC’s board members, like Ms. Suara, use influence they have gained using dawa, to gain sympathy and support, to silence and shutdown anything or anyone that has spoken about Islam, and Islamic organizations. Ms. Suara is vice chair of the Business and Professional Women of Tennessee.

This is only a sampling of the influence by victimhood AMAC and it’s board members use. Women in Numbers clearly caved to pressure brought on by Ms. Sulfat, (AMAC), showing they are in fact biased and issue based. They obviously agreed Ms. Swain was a well qualified candidate for Mayor of Nashville..what changed their mind? You be the judge.