On July 22, 2019, ICE agents went to pick up “a convicted criminal alien ICE fugitive with an outstanding removal order” who was living in the Nashville Hermitage neighborhood.

That same day, a group called “Movements Including X” (MIX) – (X being a fill-in-the-blank for whatever far left agenda the group decides to take up), and neighbors of the criminal alien, took action to make sure that the convicted criminal stayed in their neighborhood, forming a human chain to help the illegal hole up in his house where ICE could not make an arrest.

One thing to know about the MIX group is that they absolutely hate the police. They were big backers of the anti-police community oversight board (COB). While pushing for the COB, Gicola Lane and Melissa Cherry were adamant that people like themselves should be in charge of overseeing Nashville’s police.

Gicola Lane is another Emerge Tennessee graduate. So is former AMAC chair Zulfat Suara whose organization pushed for the COB. Both women support illegal immigration and pretty much every radical position of the left fringe. Both of them ran for Nashville Council at-large seats. Anyone seeing a pattern here?

Emerge Tennessee says its mission is to change the South.

Pro-sanctuary city Bob Mendes reached the needed 10% vote to secure one of the five at-large council seats, leaving four to go to a run-off election. Suara made the run-off but Lane didn’t. No matter since these two would vote the same way. The only difference is that Suara will push her political sharia agenda and force the council to make all kinds of concessions on her behalf.

Under Suara’s leadership, AMAC pushed hard against the anti-sanctuary city law passed by an overwhelming majority of state legislators in 2018. In fact, AMAC said to “demand that Governor Haslam veto HB2315, an extreme anti-immigrant bill.”

The weak-kneed Haslam let the bill become law without this signature even though he had campaigned at one time promising to “do everything within my authority to be sure that Tennessee does not attract illegal activity.” Does it get any more pathetic?

Regardless of the state law, Nashville lefties still yearn to be a sanctuary city and keep criminal illegal aliens in their communities like the actions taken by MIX and neighbor Stacey Farley. 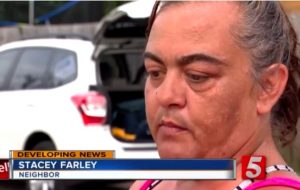 “I could see if these people were bad criminals, but they’re not, they’re just trying to provide for their kids,” Farley said. ‘The family don’t bother nobody. They work every day. They come home. The kids jump on their trampoline. It’s just a community.’”

The criminal illegal alien that Farley feels passionately she must help protect, was reported to have multiple arrests and convictions in Davidson County. The guy is also working illegally somewhere.

Not sure how bad a criminal you have to be to satisfy Farley that you shouldn’t be allowed to live and work illegally in the state.

On May 16, 2019, ten miles away from where Farley lives with her illegal alien neighbors, the U.S. Attorney for the Middle District of Tennessee announced that an illegal alien and MS-13 gang member from El Salvador living in Nashville, was sentenced to 10 years in prison. This particular criminal threatened and tortured a federal witness – “pointing a rifle at him, strangling him with the rifle strap, spraying bleach into his eyes; and then attempted to suffocate hi by placing a plastic bag over his head” and finally threatening to kill him and his mother.

In another Nashville-based case, announced the same day, a federal grand jury indicted two illegal aliens on drug distribution and firearms charges. Around the same time last year, two illegal aliens were indicted as part of a group distributing heroin and fentanyl responsible for the overdose deaths of at least two people in Tennessee.

Stacey Farley says she’s committed to protecting her illegal alien criminal neighbors because she wants the grandson she is raising to “live somewhere safe.” She may be a lost cause to rational thinking but during his primary campaign, Bill Lee said that if he were governor, he’d sign the sanctuary bill into law because sanctuary cities and sanctuary policies “put our entire state at risk.”

If Lee really meant what he said, then why haven’t we heard a peep from him about what’s going on in Nashville?