A surprisingly honest report filed with police about a husband’s assaults on his wife is pretty much in line with what sharia law tells him he can do.

The couple is from Iran.

How did they come to live in Nashville? Refugee resettlement? Who knows.

Anyway, the wife, after she “was able to escape the home living situation,” went and filed a report with police.

She explained that even though there were prior calls to police for domestic violence, no reports were filed because her husband, Sina Mousavi, “would not permit her to speak to police based on ‘marital and religious rights from their country of Iran’”.

According to the wife, during the couple’s fights, her husband Sina Mousavi, would “shove napkins in her mouth, and pull a knife and place it against her side to scare her. She also reports he would place his hands around her neck, but says he never left any marks.” 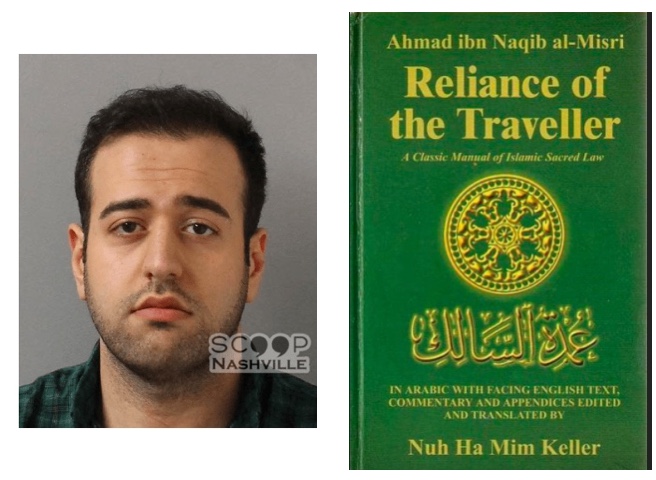 A full copy of “The Reliance of the Traveller, A Classic Manual of Islamic Sacred Law” is available under the tab up top “Education Material” on the Dailyrollcall website.

Warner’s book provides the text and citations to both the Koran and to the relevant sections of the Reliance of the Traveller. For example:

“Allah has made men superior to women because men spend their wealth to support them. Therefore, virtuous women are obedient, and they are to guard their unseen parts as Allah has guarded them. As for women who you fear will rebel, admonish them first, and then send them to a separate bed, and then beat them. But if they are obedient after that, then do nothing further; surely Allah is exalted and great!”

“When a husband notices signs of rebelliousness in his wife whether in words as hewn she answers him coldly when she used to do so politely, or he asks her to come to bed and she refuses, contrary to her usual habit; or whether in acts, as hen he finds her averse to him when she was previously kind and cheerful, he warns her in words without keeping fro her or hitting her for it may be that she has an excuse.

The warning could be to tell her ‘Fear Allah concerning the rights you owe to me,’ …

If she commits rebelliousness, he keeps from sleeping with her and refuses to speak to her, and may hit her, but not in a way that injures her, meaning he may not bruise her, break bones wound her or cause blood to flow…”