The more layers you peel back, the more unbelievable it gets that Bill Hagerty really believes that Tennessee voters aren’t going to notice that his political running buddies are open borders amnesty-granting globican elitists.

Mitch McConnell green-lighted the 2013 “Gang of Eight” (G8) comprehensive immigration reform bill even though Senate conservatives asked to block the bill from reaching the Senate floor.

The G8 bill (S.744) was heralded as the answer to all our immigration problems, especially because it had bipartisan support – four D’s and four R’s. The bill passed in the Senate 68-32, with 14 Republicans joining all Democrats. Predictably, Tennessee’s globicans Corker and Alexander voted for it.

The G8 bill was an amnesty plan, plain and simple. It provided a blanket amnesty called “registered provisional immigrant status” for illegal aliens in the U.S. before 12/31/11. Even the Congressional Budget office agreed that the bill gave amnesty to illegals, and also reported that the G8 plan would barely make a dent in reducing future illegal immigration.

The G8 bill also incorporated the goals of the DREAM Act to amnesty illegal aliens who entered the U.S. before age 16, whether brought by parents at a young age or entering on their own.

Each group of amnestied illegal aliens would ultimately be able to naturalize and become voters.

Little Marco Rubio (so named by Trump during a primary debates), was one of the bipartisan co-sponsors of the bill. Rubio has also been a gigantic proponent of expanding the corrupt H1B visa program which serves to undercut employment of American workers by replacing them with cheaper foreign labor. Disney CEO Bob Iger who has used the H1B visa program to dump 250 American computer programmers and replace them with foreign workers, has dumped several million dollars into Rubio. 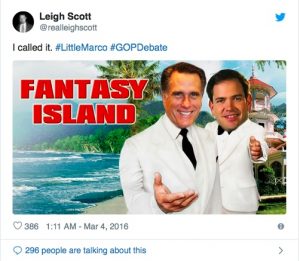 Never-Trumper Mittens Romney scaled back tough talk on on illegal immigration after securing the GOP nomination in 2012, and starting soft-walking his own version of an amnesty-type plan.

As a U.S. Senator, his real colors on illegal immigration are showing; he voted against funding the border wall and joined with 11 other Republican defectors (which included Rubio and Lamar), to obstruct the President’s legal executive authority in issuing an emergency declaration about the crisis on the Southern border and the need to fund the wall.

Hagerty has proudly announced McConnell’s endorsement for his Senate run.

Hagerty was a Jeb! delegate in 2016 but after Jeb! withdrew, Hagerty flipped to supporting Rubio. (BTW, Haslam was also a Rubio supporter).

Hagerty was Romney’s national finance chairman for the failed 2012 presidential campaign. According to Chris Devaney who is chairing Dr. Manny Sethi’s campaign for Senate, Romney has endorsed Hagerty for the same Senate seat.