Today’s show of Hagpocrisy used to try and smear Dr. Manny and manipulate voters is simply outrageous. But it also shows voters that Hagerty is a hypocrite, willing to say and do anything so he can join his Establishment cronies in the U.S. Senate.

First the Tennessee Establishment empire warned Dr. Manny not to even consider running. We know “they” had already made their pick and “they” wanted another Establishment guy to ascend to Lamar’s seat. Why else would “they” have made multiple calls to Dr. Manny telling him not to run?

Even Mitch McConnell’s National Republican Senatorial Committee called Sethi to try and convince him not to run. No doubt Lamar & Co. promised Mitch Tennessee would him send another Lamar.

Hagerty is one of “them” – rich-rich-rich and very politically connected to the Establishment in Tennessee; just tick off the names – Lamar, Bill Haslam, Jimmy Haslam, TN bankers. 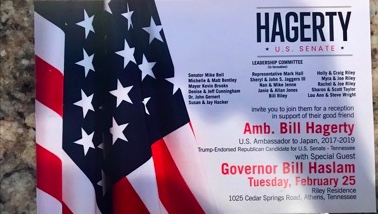 Hagerty’s $100,000 donation to Romney’s 2008 presidential race filled out his elitist club bona fides. You know, the ones who really run the state and Tennessee’s GOP. No doubt Romney’s “soft” endorsement of Hagerty’s run was phrased so as to do as little damage as possible to Hagerty’s facade of conservatism.

The current attack ads and endorsements accompanied by pathetically petty statements like those made by Marsha Blackburn, are meant to distract and try to confuse voters.

Interestingly, Marsha and Hagerty have more in common than being the follow-orders foot soldiers that they are. Ward Baker ran Marsha’s Senate campaign and is now running Hagerty’s.

Ward Baker is cozy with Mitch McConnell, having served as the executive director of the National Republican Senatorial Committee and as a political advisor to McConnell for a time.

During Ward Baker’s tenure as executive director of the National Republican Senatorial Committee (NRSC), he issued a memo warning candidates to distance themselves from Donald Trump the candidate, calling Trump a “misguided missile” and “subject to farcical fits.”

The memo was first leaked to the Washington Post which says it authenticated the document.

In his memo Ward Baker advises the NRSC staff to consider that for the benefit of candidates:

“It is certain that all GOP candidates will be tied in some way to our nominee, but we need not be tied to him so closely that we have to engage in permanent cleanup or distancing maneuvers… Don’t get drawn into every Trump statement and every Trump dust-up.”… “We may not like it, but Trump has connected with voters on issues like trade with China and America’s broken borders.

Read it all and you’ll see the effort to maintain the Establishment status quo despite Trump. The fakery suggested for how candidates should act is stunning and stands in stark contrast to the authenticity of Trump and why he appealed to voters.

Hagerty’s entire campaign is centered on tying himself as closely as possible to the President.

The Hagpocrisy is staggering and especially as it applies to the most recent attempt by a Breitbart writer to smear Dr. Manny (with help from a former Breitbart writer who lives in Tennessee???).

Hagerty, his campaign manager/advisor, and his stable of Establishment cronies are the epitome of insider swamp politics. This is the same swamp that President Trump has been trying to drain.

Tennessee has suffered a string of “conservative”candidates turned Establishment once in office. Ward Baker’s memo reflects the condescension of the “ruling class” and how to manipulate voters.

Don’t let yourselves be manipulated by Hagpocrisy.