As the 2020 Presidential election approaches, it is of utmost importance we demand our voting process works, and is run by unbiased, fair people. But will it be fair to the residents of Greene County TN? In February of this year, Lena Kendrick Dean, a Greene County election commissioner posted on social media her blatant disdain for President Donald Trump. Her posts contained foul, disgraceful pictures, including the below of a lipstick she proudly purchased, called “Fuck Trump”.  Along with other derogatory statements regarding the President, we learned Ms. Dean is also on the leadership team of a well organized, radical group called “Indivisible”. While Ms. Dean defended her position by claiming Indivisible is just a group of people helping communities, it clearly is not, and has the stated mission to do whatever it takes to see President Trump lose.

Really? An election official publicly showing her hatred for a president who is running for re-election, and her role as a commissioner is to uphold the “purity of the vote?  The residents of Greene County deserve to be assured their votes are guarded, and counted.

So who and what is Indivisible?

In January of 2017, Indivisible released “ A Practical Guide For Resisting the Trump Agenda”.  The main purpose for this guide was to compare lessons learned from the Tea Party movement, and how to get Congress to respond to your demands. The tactics and strategies advanced in the Indivisible Guide are modeled on those of the conservative Tea Party movement that came to prominence during President Barack Obama‘s first term in office

Indivisible was founded by five former Democratic congressional staffers in the immediate aftermath of Donald Trump’s victory over Hillary Clinton in the November 2016 presidential election.  Indivisible’s first order of business was to launch a website devoted to providing leftists and liberals with strategies for countering the “radical, racist, and sexist” objectives of President Trump.

Indivisible’s modus operandi is rooted in the organizing tactics of Saul Alinsky, who wrote:

“Wherever possible, go outside the experience of the enemy. Here you want to cause confusion, fear, and retreat.”

“Power is not only what you have but what the enemy thinks you have.”

“The threat is usually more terrifying than the thing itself. If your organization is small in numbers,… conceal the members in the dark but raise a din and clamor that will make the listener believe that your organization numbers many more than it does.”

So when Ms. Dean posts pictures of herself and other Indivisible members doing good deeds for her community, know that the real agenda is based on Saul Alinsky and his “Rules for Radicals” mentality. Seems hard to imagine someone with these ideals could be fair as an election commissioner. 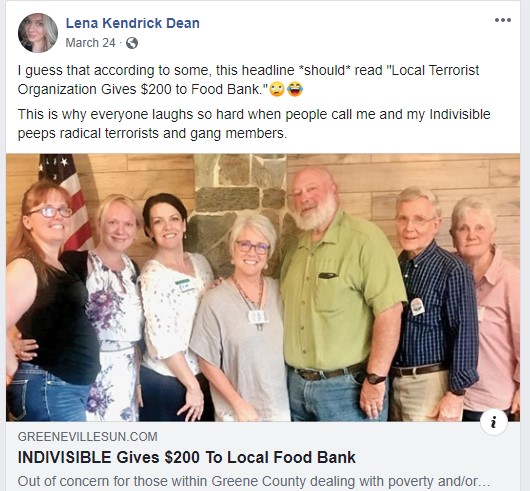 This is America, and certainly everyone is entitled to their opinions, and belong to opposing organizations. However, Ms Dean also has a responsibility to do a duty and conduct herself in a professional manner. According to the Greene County Election Commission webpage, it states:

The Greene County Election Commissions’ purpose as designated by Tennessee Code Annotated (2-1-102) is to:

Secure the freedom and purity of the ballot.

After exposing Ms Dean in February of 2020, many residents called both their local election office as well as the state Election Commission. Shortly after that, this author received a letter from an attorney asking to meet with Ms Dean to talk things over. It also stated many things written were not quite accurate, at which time we responded please advise us of any inaccuracies or falsehoods and we would certainly retract them. To date, there has never been a report of any such inaccuracies or falsehoods. Obviously, the letter was meant to attempt to stifle our findings regarding Ms Deans behavior.

Facts are facts. Can Ms Dean represent the Greene County voters in an unbiased, fair and credible manner? You be the judge.