On the holiest day of the year for Christians, Easter Sunday, churches were eerily empty, with congregations forced to stay at home due to a virus, and restrictions that don’t allow 10 or more  people to gather. While some pastors broke those guidelines, and faced arrest, many others were harassed by state police officers taking vehicle license plate information as they chose to attend services. Easter Sunday for millions was instead celebrating alone in their homes watching streaming or televised services. The day passed quietly, leaving many sad and unfulfilled.

On April 24, Muslims began their month-long observation of Ramadan, and they want to be sure everyone knows it. While mosques will remain closed, Muslims in many large cities have sought, and received noise permits, so that the Adhan, or call to prayer could be broadcast across communities. Jacob Frey, the Mayor of Minneapolis was the first to embrace the idea, as Muslims in the Cedar Riverside community, along with CAIR ( Council on American Islamic Relations aka Hamas) requested the executive order to permit prayers to be heard over loud speakers, 5 times a day.

Sounding more like a political statement, the author of an article by Dr. Michael Van Keulen printed in the Star Tribune, states “I believe that this is a moment when we are called to our democratic principles. I encourage all of us to not be distracted by fearmongering or hate speech. The call to prayer is no more a sign of a religion taking over than those beautiful church bells I have heard for years. Our nation is strong enough to value and include our diversity. Our people are strong enough to ensure that all can live with dignity. Accepting that this is a year that challenges our sense of community, I hope that in the end, this time results a greater and more inclusive nation.”  Church bells ringing hardly are hardly the same than a prayer being recited in public.

As if that weren’t enough, NYC will be supplying 500,000 halal (permissible) food to Muslims for the entire month of Ramadan: About 400,000 Halal meals will be distributed at 32 Department of Education buildings and another 100,000 will be served through community organizations during the month. Mayor Bill DeBlasio had this to say about these meals “One of Ramadan’s most noble callings is to feed the hungry,” de Blasio said during a Thursday news briefing. “To remember to be there for those in need. And that is now harder than ever now that people can’t go to their mosques.”

While this program overall serves kosher food as well, it is a program many cities have to feed those in need during this pandemic, but not specifically for a month-long religious event.  As CAIR ( Council on American Islamic Relations aka Hamas) continues to publicize their bogus reports of Muslims being oppressed and discriminated against, it is clear, they are not at all but rather just the opposite. For years now, many businesses, schools and organizations have issued guidelines for recognizing Muslim holy days, dictating what to do and not do while their Muslim employees or students practice their faith, including fasting during Ramadan.  In this article in the Business Insider, it suggests “But don’t make jokes about your colleague not having coffee or eating lunch, either.” as that would be offensive. 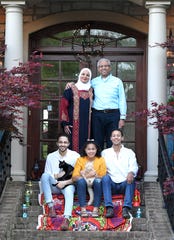 As if the month of April has not had any other highly religious holy days, the Tennessean published an article “How one Brentwood family is adapting their Ramadan traditions during the COVID-19 crisis”. The article picturing a doctor with his family on their mansions front stairs, while Nashville Scene features another article, “Nashville’s Muslim Community Prepares for a Ramadan Unlike Any Other”.

By all appearances, it seems many news outlets are smitten with the Muslim community, promoting them to be somehow more pious or affected by this virus than others.  Muslims have created this false sense of importance, that they are the only ones that are making sacrifices during this crisis. Yet were there massive efforts to feed needy Christians during the holy week of Easter or Jews for Passover? Were Christians allowed to hear sermons over loud speakers  in their neighborhoods during their holy week? Did newspapers send reporters to Christians homes to see how they were affected by celebrating the joys of Easter alone in their homes?  Do businesses and schools have specific guidelines to address what their Christians and Jewish employees and students can and cannot do during their holy days? You be the judge.

If one thing can be learned by this, is Muslims in America are not oppressed, discriminated against or harassed like they claim, but rather are placed on pedestals that promote them as a special class somehow more worthy of acknowledgement, and if treated differently, CAIR will be knocking on your door with lawsuit papers in hand.

1 thought on “Does Muslim Holy Month Garner More Attention Than Christian Or Jewish Ones?”