How would you feel if hardened prisoners, convicted by juries, and sent to prison to fulfill their sentences were now walking the streets of your neighborhood? Well, if they aren’t yet, they will be soon, so buckle up and be aware. And no, this isn’t just occurring in major cities in liberal states, it’s happening in unlikely areas, including Tennessee.

On December 11 2019, Tennessee Dept of Corrections Commissioner Tony Parker, along with Gov Bill Lee celebrated the groundbreaking of a women’s shelter that would help former female inmates’ transition from prison life. While I believe these programs are helpful, there is an entire slice of this reform that is going unspoken. 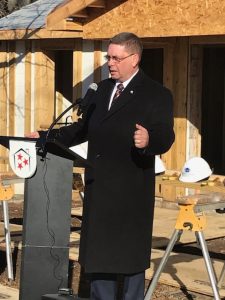 “When you look at the root causes of crime, what drives it – addiction and mental health issues – we know the answer to reducing recidivism here in Tennessee is programs like this” Said Parker.  First of all, the Commissioner of The Tennessee Dept of Corrections is stating criminals are either mental or on drugs is misleading, as many that deal with criminals (like I did for 20 years) every day know a vast number of criminals are just opportunistic thugs.

While the criminal justice system in the United States is far from perfect, releasing those who have committed crimes of all kinds is not the answer, despite the intentions of Christian organizations who believe criminals can be cured. One such group is the Tennessee based Men of Valor, a group supported by long time former board member Gov. Bill Lee.

Men of Valor is an exceptional organization that has changed many lives and boasts on its website “Men of Valor is committed to winning men in prison to Jesus Christ and discipling them. Our purpose is to equip them to re-enter society as men of integrity – becoming givers to the community rather than takers.”   We are all for changing minds and helping people find God, but at what expense must Tennesseans be willing to pay if the program doesn’t work for all those being released, and is it appropriate for all offenders?

In the meantime, while concerned over recidivism rates, Men of Valor and other organizations are offering assistance to inmates, a blanket set of conditions for newly released prisoners has been discovered. Typically, when those who have committed serious crimes have completed a prescribed amount of time, they are often released under the supervision of Parole, with less serious offenders to Probation.

As law enforcement officers are being subjected to every kind of harassment, disrespect, assaults and targets on their backs, departments are facing dangerous shortages, and manpower issues. What’s just as serious is the system breaking down around them, leaving their jobs in many cases obsolete. Unfortunately, this includes Parole and Probation. According to sources, Parole officers are not allowed to make arrests based on the violation’s offenders committed, even if it was one of their prescribed conditions. This would include drug possession and, in some cases, weapons. Why? Because in the state of Tennessee, Parole officers are not given powers of arrest.   This in turn has empowered former prisoners released under supervision to do whatever they want, including violate their terms of release. If such terms are broken, the Parole officer cannot make the arrest, but rather must obtain a warrant, then request local law enforcement execute it. Many times warrants are not entered into the National Crime Information Center (NCIC) system in a timely matter, giving the former inmate a pass if he/she has contact with police.

Last week, Gov.Bill Lee’s Criminal Justice Reform Task Force released their report, which has many scratching their head, as it is more about release then reformation. Labeling the breaking of their terms and conditions “technical violations” is soft balling the ever growing problem of prisoners failing to follow the rules. From the report it states:

Ya think? If parolees or probationers are only being arrested on technical violations, not new charges, that simply means they are not capable of following rules.  If they can’t, follow rules or conditions what makes one think they can follow laws? It does not help, that in Tennessee, Parole and Probation officers have no powers to arrest.

“In 2016, in part seeking to address the growing number of technical violations, Tennessee enacted the Public Safety Act, establishing the use of a graduated sanctions matrix to respond to non-compliant behavior in a swift, certain, and proportional way. However, the data examined demonstrated that graduated sanctions are currently being used inconsistently across the state. Furthermore, the matrix establishes several zero tolerance policies that disproportionately affect individuals with substance use disorders. This zero-tolerance conduct, which results in immediate revocation, includes refusing to submit to a drug screen, testing positive for methamphetamine, or testing positive multiple times for any other type of drug use.”

So, the answer has been to not allow officers to re arrest those who originally were jailed for drug offense but now allow them to use or possess drugs. This can only get worse, as drug users often resort to more violent crimes to feed their addiction.

Coming up in Part 2, a look at some of those former prisoners released under “community supervision” that have committed murders in Tennessee, in the last several months.

1 thought on “Criminal Justice Reform In Tennessee Is All About Release Part 1.”