On December 26 2019, Tennessee Gov Bill Lee appointed former State Senator and candidate for Gov, Mae Beavers to a position on the states Parole Board. On the same day, The Council on American Islamic Relations (CAIR) aka Hamas, vowed to “monitor” her every move to ensure there is no bias, particularly against the Muslim community. 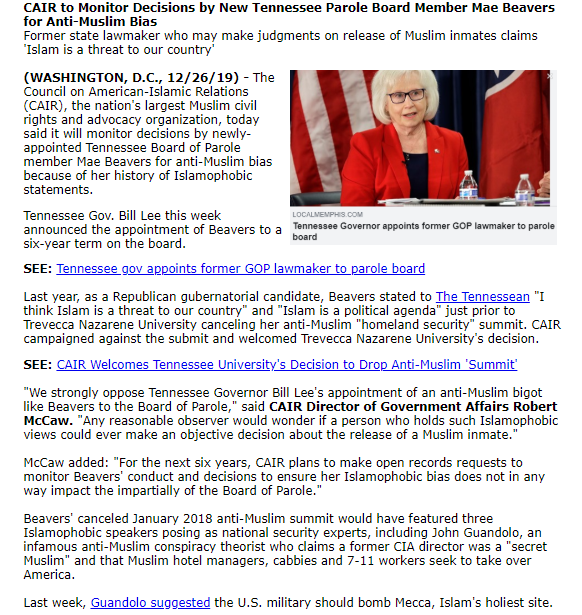 This isn’t the first time CAIR has stuck its terrorist loving nose into Tennessee business, in 2018 Mae Beavers was running for Gov, and had planned a National Security event which included speakers Dr. Bill Warner, John Guandolo, and myself, Cathy Hinners.  This event was to be held at Trevecca Nazarene University in Nashville TN, Mrs. Beavers former college which also has deep family roots. Trevecca canceled the event after CAIR/Hamas made a complaint to the President of Trevecca, Dan Boone, who caved immediately.

Although Tennessee is not home to a formal CAIR/Hamas chapter, its sister organization the American Muslim Advisory Council (AMAC) is embedded deeply. AMAC, despite its “bridge building” façade, has brought CAIR to TN on many occasions, and uses its interfaith and social justice involvement as a guise for peace and love. Beware Tennesseans, AMAC is not about forging relationships with the Muslim community but has infiltrated its way into even the Gov’s office.

What has not helped, not only did former Gov Bill Haslam legitimize AMAC, so has Gov Bill Lee, who reportedly met with members of AMAC on two occasions, the last being 10 days after he was sworn in. So now that CAIR/Hamas has strongly opposed the Mae Beavers appointment, will Gov Bill Lee succumb to the pressure, and remove Mae Beavers from her newly appointed post? 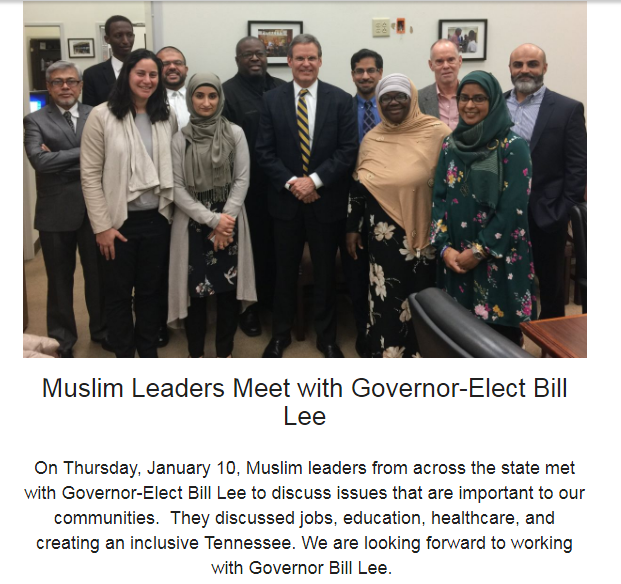 We hope not, and we ask Gov Lee to not be intimidated, or pressured into changing his mind. Our message to CAIR and AMAC should be strong and swift.  We Tennesseans do not welcome, or want CAIR/ Hamas or AMAC to have any say in anything occurring in our state.

Tennesseans believe in Mae Beavers, who will conduct herself as she always has, professionally and with Tennesseans best interest in mind, but will the relationship Bill Lee has forged with AMAC be stronger?