It’s pretty interesting that Governor Lee keeps telling us how much “control” he can have over which refugees come to Tennessee now that he’s consented to putting the state back into the program.

Except Lee hasn’t actually defined what control means in any definitive way.

During yesterday’s second radio interview Lee mentioned the “control” factor no less than four times while defending his decision to put Tennessee back into the refugee resettlement program.

This process that President Trump has outlined and that all these Republican governors are engaging? You know why they’re engaging? Because if we don’t, the Democrats decide what this process looks like. If we engage in this then we get to have some control over who comes. Where they come from. How they’re assimilated.

“…we get to have some control over who comes. Where they come from. How they’re assimilated.”

Remember the President’s Executive Order on the travel ban – the one titled Protecting the Nation from Foreign Terrorist Entry into the United States?

But even this has limits.

During the time of the first vetting discussion after the jihad in Paris, MULTIPLE U.S. agency officials involved in vetting refugees testified that vetting refugees from failed states or where no databases exist or where refugees lack vital documents, demonstrate the real limits of the vetting exercise.

We know that Tennessee is Trump country but that doesn’t shield Lee from his own actions – especially since Trump has been trying to dismantle the dysfunctional refugee resettlement program since he took office!!!!!!

During the campaign Lee told audiences that he supported the state’s Tenth Amendment lawsuit challenging the refugee program. The problem of course it that voters thought it meant he agreed with them that the state shouldn’t get back into resettling refugees and that the federal government shouldn’t get away with forcing the state to pay for a program from which it had withdrawn.

But the Governor has said he feels all better about it now because the President gave him a choice and didn’t force the state to be in the program.

So Governor, please, please, please explain to us, the great unwashed, how what you’ve said about the state now not being forced by the federal government to pay the fed’s cost share for the program, doesn’t undermine the state’s lawsuit?

And what is to be understood when the Governor says nonsensical things like we can’t stop refugees coming to Tennessee from other states so we should go ahead and have the federal contractors bring new refugees in from overseas. Huh?

And the thing he and his wife have with Kurdish refugees and the Governor’s adamant declaration that he won’t turn his back on them! Talk about a direct backhand to Trump against whom Nashville’s Little Kurdistan protested after the President’s decision to withdraw U.S. troops from Northern Syria. 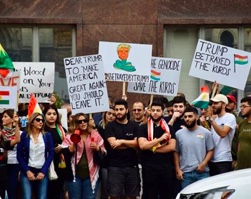 The immigration issues plaguing the country was a centerpiece of Trump’s campaign. Trump has been trying to reduce the entry of low and unskilled immigrants and those who like refugees, are legally able to use all public assistance welfare programs. The Trump-effect has been that “workers at the bottom of the pay scale have been feeling positive effects on their wages at the end of 2019 — especially when compared to those at the top.”

Unlike Lee’s first “incoherent defense of his refugee decision” Monday’s radio host went overboard trying to minimize the overwhelming public criticism of the Governor’s decision by calling it a mere “disagreement.”