Beginning in 2013, the Beacon Center’s Pork Reports have pointed out that taxpayer funded subsidies for the entertainment industry benefit the corporate entity and not the taxpayer.

Hagerty, a committed globalist, also began looking to expand trade markets for Tennessee companies. With this goal in mind, he decided to push Tennessee companies to start exporting their goods to Communist China. So Hagerty had his Alexander sidekick organize a medical trade mission to China and South Korea for medical device manufacturers and other health care companies. 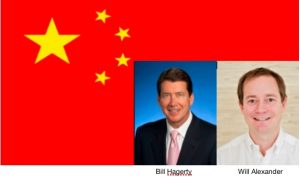 By 2013, Tennessee was ranked number one in the country for Foreign Direct Investment job creation, including investment in the state from China.

Who doesn’t want to own a piece of the South?

Hagerty took the early lead on deepening Tennessee’s ties to the communist state until he left in 2014. By 2017, Tennessee was reported to be “a top China trader” and being “the most dependent state in America for trade with China.”

Now that Hagerty’s running for the U.S. Senate and the anti-China sentiment spinning off of the COVID pandemic, he’s criticizing China for its trade expansionism.

On top of that, Hagerty’s plan to make Tennessee a profitable exporter to China never materialized. Instead, in 2016, two years after Hagerty put his plan in place, Tennessee had imported $23.7 billion of products from China compared with exports to China from Tennessee of $2.2 billion.

Expanding trade markets for Tennessee companies makes sense and was probably the same reason that had Hagerty thinking about the Middle East and why he hired someone with expertise in Shariah-compliant finance transactions. That’s the Samar Ali story which by all accounts of Hagerty’s campaign appearances raises questions that visibly irritate him. Like the fact that he says he’s pro-Israel but hired someone whose father has for over 15 years led a virulent anti-Israel organization.

Hagerty wanted Tennessee to get cozier with China even while Tennessee companies were off-shoring their manufacturing. Now the globalist conveniently turned nationalist, wants us to believe that his outrage for China’s trade practices (“China is acting more like trade enemy than trade ally”), and deception related to the Wuhan virus, is sincere.