In 2007, the spiritual leader of the Muslim Brotherhood, Yusef Al Qaradawi stated there is no war needed to conquer the west, but rather a peaceful conquest…called dawa.  Dawa is the invitation by a Muslim to join Islam, often through proselytizing.  This is only done in non Muslim majority countries, but as the population of Muslims increase, the concept of dawa becomes less, and the choice to become a Muslim is either pay a tax, called jizya, revert or die.

Currently, in the United States, dawa is increasing, and ignorant Christians and Jews are flooding mosques to hear a false message of peace and tolerance. Oddly enough, in  Tennessee, the “Buckle of the Bible Belt”,   dawa is not only permitted, but embraced and supported. On July 13 2019, The Islamic Center of Tennessee welcomed Imam Anwar Arafat to give a presentation on how to use dawa, and now on July 20, Dr. Sabeel Ahmed will continue that topic.

Sabeel Ahmed is a master at dawa, which he reveals as he opens dialogues with non Muslims by saying.” I help people find peace and purpose in life.”

Who doesn’t agree with finding peace and your purpose in life? However, he uses this message to plant the seed of Islam in those who are ignorant of what Islam really is. The Methodology of Dawa, written by Shamim Siddiqui, which is a private guide for Muslims to perform Dawa, however sends a different message. Dawa is like a magicians trick, watch this hand, while the other hand does something else.

It’s that something else that is found in the Methodology of Dawa, you need to be concerned about.  While Muslims like Sabeel Ahmed like to use slick pickup lines, his goal is the same as this passage in this document.

Making Allah’s deen (religion) dominant is the goal and religious obligation of every Muslim.

So now that you see the public way Muslims use dawa, lets look at what their private guides suggest. The following are excerpts which lays the foundation as to why Muslims must use dawa.

As we witness everyday, Muslims have portrayed themselves as victims of religious discrimination, which has gained them support and sympathy. This, as they say is the “game of strategy”.

If you are paying attention to the Islamic movement here in America, specifically in states like Tennessee, this excerpt is correct in that we recognize their strategy and are exposing it.

This is exactly what is happening. 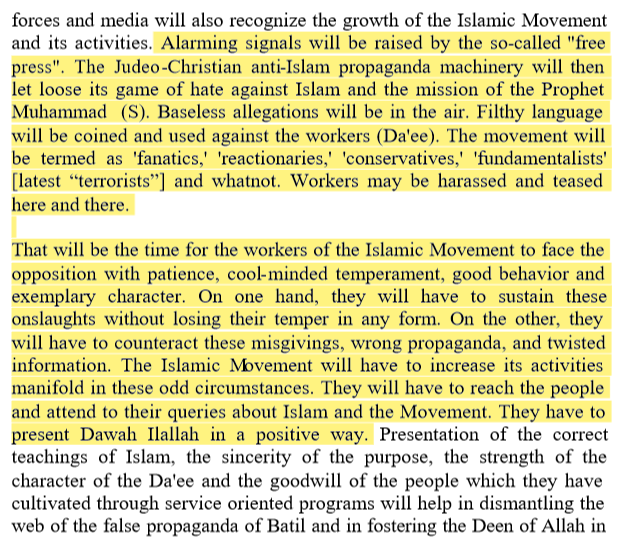 Remember, Sabeel Ahmed’s line “I help people find peace and purpose in life.”  All in an attempt to make you believe those speaking the truth about Islam are wrong. It’s all about peace and purpose.

As we have extensively discussed before, the Islamic movement is in full force, and continues to forge ahead by Muslims gaining power within our government. In this excerpt, it validates the use of dawa, as a means to be accepted enough to garner support and be elected to our highest political offices. 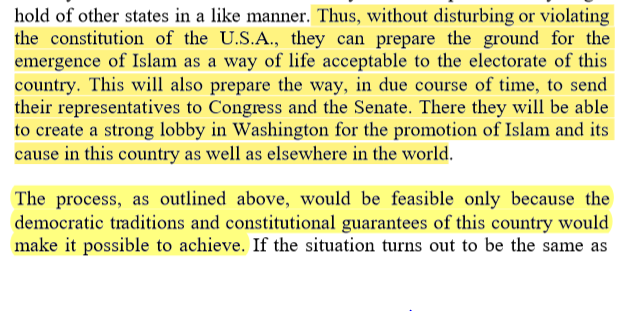 It should be clear dawa is a tool used by the Islamic movement, even in the Buckle of the Bible Belt, to gain power by sympathy and once in positions of power, as they now are in Congress, the ability to effect change will soon be very noticeable.

If we are to remain the great republic we are, we must learn from their documents and beliefs rather than rush to hear and believe their words.  Remember their “I help people find peace and purpose in life.” is not the peace and purpose we believe in.

Read the entire document the Methodology of Dawa here