Many Democrats in America have lost their minds. They are no longer pro America, but rather pro everything that stands against it. In Tennessee, the Buckle of the Bible Belt, a Democratic candidate for Congress in district 4 has decided to prove it. In a recently posted tweet, Christopher Hale has professed his allegiance to Muslims, despite being ignorant of Islam. 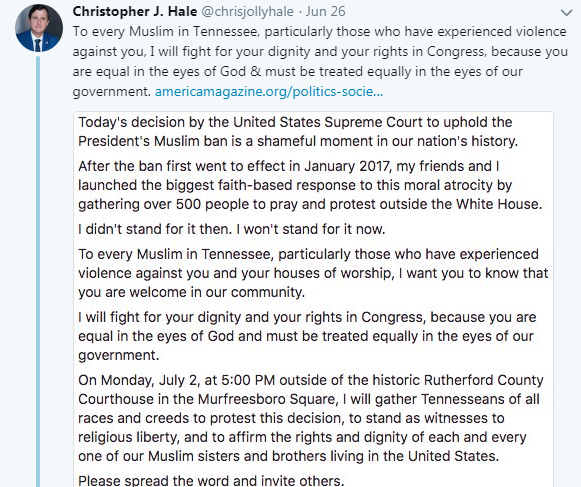 Hale seems to be leaving the rest of his constituents behind, as he promises to uphold rights for those who want drastic change in America. What’s even more frightening is his  support for the young socialist in NY,  then claiming he wants to change TN. 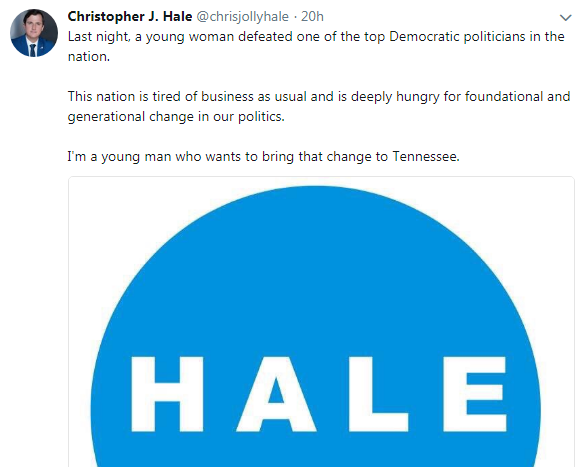 Candidates like Hale are dangerous, and those identifying as Democrats in TN and America, need to research the person, and their ideology, not vote simply for the D label.  Proclaiming Muslims “are equal in the eyes of God” shows his lack of knowledge of those he supports. In Muslims eyes, no one else is equal, but rather Muslims are superior. Hakim Mayfield Rah  with Nashville Masjid Al-Islam has made several posts on social media which infer allah is the only god, and this, elluding the Christian God is a trick. 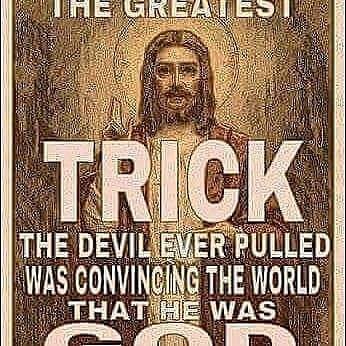 In a document called the Methodology of Dawa, by Shamm Siddiqui, the protocol for how to perform this religious obligation is thoroughly put forth, including the following which declares their god to be supreme.

To me, it appears as the fate of the American people. They are in need of
some ideology. It is we the Muslims who are here by Allah’s will to
provide that opportunity to this great nation which is humiliated
everywhere due to lack of a superb ideology of its own. It matters little for
the Islamic Movement as to whether it takes one or many decades to make
the ideology of Islam prevail over the mental horizon of the American
people. The action must be taken now. The Movement must be set out
forthwith. The struggle for making Allah’s Deen dominant must take
shape without any further lapse of time.

In the Quran, there are several directives for Muslims not to even be friends with Christians and Jews.

We could continue on, but you get it. As Omar Ahmed the co-founder of CAIR/Hamas stated

Hale really doesn’t stand a chance, but his just running for office should concern you.  It is weak men like him, along with organizations like the TN immigrant and Refugee Rights Coalition, (TIRRC) and the American Muslim Advisory Council (AMAC) that believe in open borders, rights for illegals and are pushing for a complete demographic change.

Hale is a danger to our Republic, and the State of Tennessee. Research before you vote, remember Knowledge is power!