As Governors across the country say yes to refugee resettlement in their respective states, the grumblings from counties within those states is growing, as most residents realize refugees cannot be as vetted as they are portrayed.

What should be startling news to those who believe the vetting process is fail proof, is the news 12 Saudi Royal soldiers, attending our Naval training centers, hand picked and “vetted” have just been expelled due to an act of terrorism on our own soil. Some of those 12, include charges for child pornography.

On December 6 2019, gunman Mohammed Saeed Alshamrani, an aviation student from Saudi Arabia, opened fire at the Florida base killing 3 American soldiers. Alshamrani was participating in a training program in conjunction with the Pentagon in an agreement with Saudi Arabia that teaches English, basic aviation and initial pilot training. 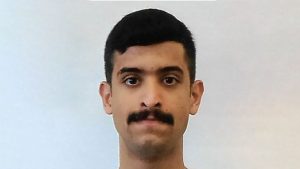 “In the wake of the Pensacola tragedy, the Department of Defense restricted to classroom training programs foreign military students from Saudi Arabia while we conducted a review and enhancement of our foreign student vetting procedures. That training pause is still in place while we implement new screening and security measures,” Pentagon spokesman Lt. Col. Robert Carver told Fox News.

So if our vetting for foreign military students is failing, what would make anyone think the refugee vetting process is better?

It’s not! Although President Trump is making every effort to decrease the number of refugees entering the United States, our efforts here by the best experts including, the  Department of Homeland Security (DHS),  and the Federal Bureau of Investigation (FBI) can only be as good as the very first interview abroad with the UN, who is responsible for taking applications.

From a statement of facts published on the White House website on September 29, 2017 it states: 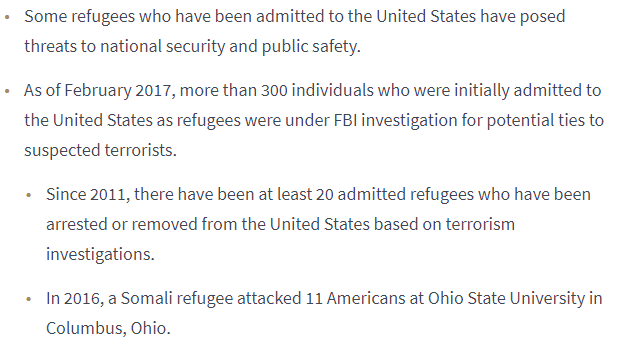 Most would agree, while the numbers have been small, it is still not acceptable that even one death would occur at the hands of a refugee.

President Trump was right on target when he attempted to implement what was falsely labeled a “Muslim” ban, which was limiting the numbers of those entering America from volatile Middle East countries. Many of those countries are war torn, third world, with the general tone of hating the West. To attempt to squash the idea many refugees are Muslim, the same Governors that said yes, are now using talking points that suggest we will only be accepting Christians.  According to the refugee placement rules is the following.

It should be perfectly clear, no one can dictate who will be arriving on our shores. So how is the vetting process flawed? Beginning with the United Nations High Commissioner for Refugees,  (UNHCR) an application is submitted and reviewed. As the process continues abroad, we depend on accurate, truthful, information which eventually depends on biometric data. Ask yourself this question..how can an individual from a war torn, or third world country be vetted by fingerprints, facial recognition, or DNA, when these country’s have no way to collect or store this type of data. American intelligence is absolutely the best, however information collected can only be as good as the first interview where pedigree info is presented by the refugee. While we here in the United States are technologically advanced, countries of origin for many refugees are not.

How can we consider someone who upon arriving at customs has to be given a date of birth as Jan 1, with approximate year because they do not know when they were born? African and Arabic names are extremely complex, with as many as 5-6 components, often with titles, tribal, occupation, and surnames. There are dozens of ways to spell Muhammad. Still sound possible?

This isn’t a matter of hate, or bigotry, this is a matter of preservation and knowing who is entering the United States. At a time when the world is in turmoil, we must find another way to help those in need.

1 thought on “If Foreign Military Students Can’t Be Vetted, How Can Refugees be?”