As we continue to educate and inform voters, we thought the following facts and questions should be food for thought as Coffee County voters head to the polls to elect our next Mayor. Margaret Cunningham is running for Mayor as an “Independent”. In a private message to me, the founder of dailyrollcall.com, Mrs. Cunningham stated she is a “conservative independent” yet accepts and acknowledges an endorsement by a Democrat.  That is a Fact.  Luke Cameron, who was also running for mayor, but as a Democrat, bailed out of the race and backed Margaret. In his public withdrawal he states Mrs. Cunningham will “embody our values”, but whose values? 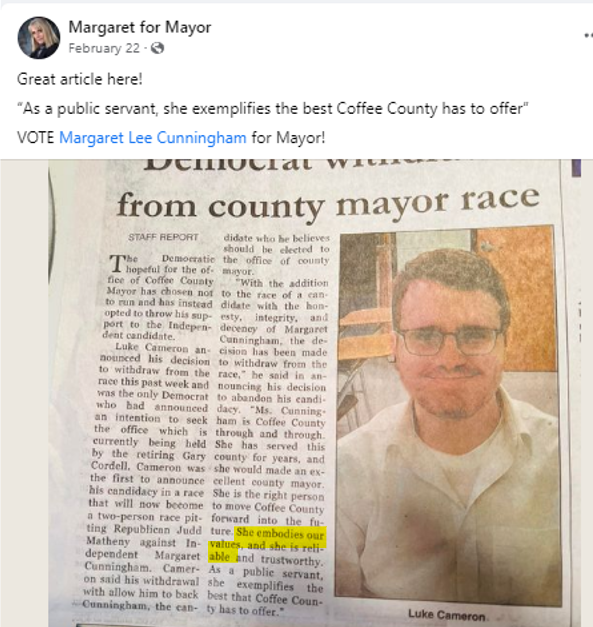 Another interesting point to ponder involves Steve Cunningham, Margaret’s husband. Did you know Mr. Cunningham is the Chair of the Coffee County Planning Commission? In March of 2022, a proposal was made to double building permit fees within the county. It’s interesting to note this proposal was put off going to the full commission, which Margaret sits on, not once, but twice.. just prior to the May primary and now the August general election.  Is it coincidence?

In the forum last week, Mrs. Cunningham spoke about not wanting inferior housing built by outside contractors to end up being the “slums”.  Is Mr. Cunningham responsible for those “slums”?

Also during the forum hosted by  Rooster radio last week, Mrs. Cunningham stated in reference to Judd Matheny’s experience, “it’s not about connections or who you know”.   Wow!  Mr. Matheny was our state representative for 16 years, and cultivated many solid friendships in many various walks of life, not just political ones.  Those “connections” are invaluable for advise, and experience which always should be welcome. Will Mrs. Cunningham  continue to rely on the same good ole boy rhinos steeped in stale ideas for our county?  (One only has to look at Manchester to see how that plays out.)

If you follow dailyrollcall, you know we have exposed all parties, Republicans included. Mrs. Cunningham may be an “independent”, but bashing the Republican party, that is the conservative party shows her true colors. In a message sent to me by Mrs. Cunningham upon hearing I was going to write about her, she expressed anger I would “plant seeds” in voters minds. What seeds would she be worried about?

“To be so low to plant seeds from just your opinion and NOT FACT is typical of your kind and not unexpected.” Says Mrs. Cunningham.

As a candidate for public office, questions should be welcomed. If Mrs. Cunningham is worried about seeds, do you wonder why?