And citizens aren’t your congregants.

Heart, values and faith are all important ingredients that every decision-maker across all walks of life hopefully bring to the table. But you Governor, have an added duty. You Governor, took an oath to uphold and govern according to the U.S. and Tennessee Constitutions. This oath still counts for something no matter how many times you tell us that you aren’t a politician.

And just to be clear, there was absolutely no rush to formalize your consent to put Tennessee back into the refugee resettlement program before the start of Christmas – that is unless you thought no one was watching or would forget about it once 2020 arrived.

Well, you are probably as wrong about that as you are about the decision you made.

You told radio listeners on Friday, that you made your decision for several different reasons but in the end, based it on your religious beliefs.

You also tried to use President Trump and Ronald Reagan for cover. Your Biblical beliefs blinded you to the fact that Trump has been trying to dismantle the dysfunctional refugee resettlement program since he took office.

Clearly the President underestimated the resolve of GOP governors to support his America First immigration agenda. After all, how could the President have known that Biblical Bill would choose people living on other continents over the 5,000 individuals with intellectual and developmental disabilities living in Tennessee on a waiting list for help. The state says our most vulnerable citizens will have to wait for help until there’s more money.

And what about the veterans in Tennessee that also are waiting for help?

You made a mockery of the President’s “Make America Great Again” movement when you tried to use it to justify your decision to consent for opting the state back into the refugee program. What’s more, you went above and beyond the consent period required by the Executive Order. Consent was only supposed to be for June 1, 2020 through the end of the federal fiscal year which everyone knows is September 30, 2020. But you made your consent valid for a year from December 18, 2019.

And the same document that outlines all the stuff on consent says you didn’t even have to consent until late spring, like May 2020. So at the very least, you could have waited until after Christmas. Or maybe even like sometime in January which was the time you led legislators to believe was when you were going to decide.

You keep telling us that you’re new to this job, but after almost a year into it, how do you not understand simple courtesy?

Governor, you are not the only Bible reader in Tennessee. Biblical mandates are for individuals. But instead, Tennessee’s got Biblical Bill who has decided to use his authority as Governor to impose a Scriptural mandate on state taxpayers.

And let’s talk about your Biblically-based inconsistencies when it comes to issues this past year:
-you’ve spent more time on school vouchers than the heartbeat bill. Even non-Bible scholars know that protecting life is in those pages somewhere.
-on thetransgender bathroom issue you said it was an area of life that the government should stay out of and that a state-wide policy would be divisive. Well, the Bible has something to say about that controversial issue also.
-and that marriage thing? That’s a twofer – Biblical and Tenth Amendment.

Are we to understand that as a faithful and devout Christian who says he supports the Tenth Amendment, it’s more like your position on the gas tax – that marriage thing is now “water under the bridge.”?

Rest assured though, that blind-siding us with your consent to put the state back into paying for a voluntary federal program is definitely unfinished business.

Nevertheless, Tennesseans were brought up with good manners so we want to thank you for the Christmas card! 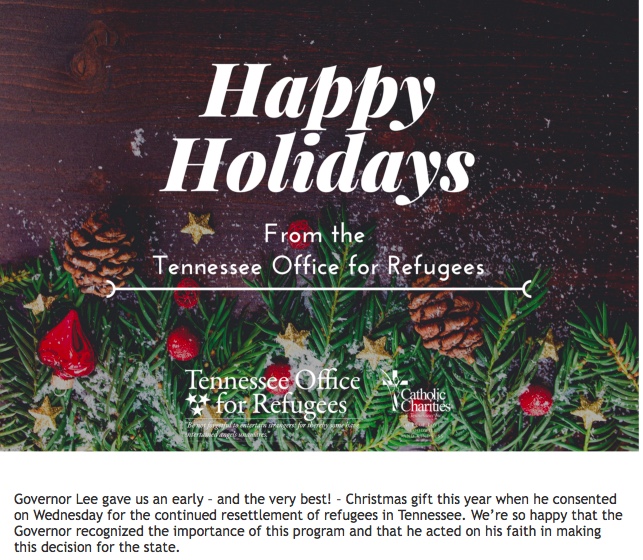