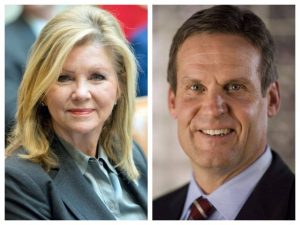 Whoa! Biblical Bill’s lefty admirers have let the cat out of the bag. The refugee resettlement program isn’t about being a humanitarian. It isn’t about saving Christians. It’s about giving Pompeo foreign policy bargaining chips!

It’s also about keeping the gravy train of taxpayer money flowing to “charities” like Catholic Charities. Someone has done a great job of digging into the public money data which federal contractors have become addicted to:

In 2018 alone, over $1.2 billion has been awarded by our federal government to organizations and religious charities for refugee resettlement, unaccompanied alien children, refugee and entrant assistance, etc.

Catholic Charities of Tennessee (CCTN)’s latest available financials show that refugee resettlement money and services have come to dominate their work since they took over Tennessee’s program after Bredesen withdrew the state in late 2007. “Service fees” money is typically what the federal government pays for the privilege of having so-called charities like CCTN disburse taxpayer money.

Don’t be misled by the entry “Basic Needs/Counseling/Job Training/Elder Care” – most likely that is funded through the U.S. Department of Health & Human Services formula grants for refugees and immigrants.

And what about those “Hispanic Services” CCTN now offers to complement the “Immigration Services” they offer?

Anyone really believe Bill Lee and Mike Pompeo’s weekend jaunt wasn’t deliberate? Don’t for one minute underestimate Bill Lee’s ego – he’s being touted by his Tennessee admirers as the expert who can help Pompeo fix the U.S. refugee resettlement program. And don’t think any of this is innocent.

Like Biblical Bill, Pompeo has a use for refugees, whether as bargaining chips for foreign allies or to mollify State Department careerists he now oversees. The same leftist New Yorker reporter who understands that the President is trying to dismantle the dysfunctional refugee program, has outed Pompeo as wanting to keep the numbers high.

“Pompeo is the critical stakeholder,” one refugee advocate said.

Now that he’s served both as CIA director and secretary of state, activists hope that Pompeo has earned an appreciation for the diplomatic leverage having a robust refugee program can give the U.S. in negotiations with other countries.

“It’s a bargaining tool: We’ll take a certain number of refugees. These are the things you will do for us,” explained Melanie Nezer, a top official with HIAS, one of several organizations that helps refugees.

What Nezer knows that gullible Republicans including Bill Lee don’t, is that from the first minute, refugees are handled by the paid federal contractors who work at the overseas Refugee Service Centers. Once there in the U.S. who do you think handles all the goodies they get from the American taxpayer? The paid federal contractors, that’s who. And whose financial health is dependent on how many refugees they resettle? The paid federal contractors, that’s who. Their messaging is not how good the American taxpayer is, it’s look what we have done for you, if it wasn’t for us fighting for your rights, the Republican meanies wouldn’t even let you come to their country or their state.

Look what President Trump has done – tried to keep you out.

And look who Bill Lee has surrounded himself with – Tennessee Globicans like his Director of External Affairs, Joseph Williams who, like Bill Hagerty,, was a Jeb! delegate, and his chief of staff anti-Trumper Blake Harris.

Then there’s Sen. Marsha Blackburn doing her level best to deceive her way out of a bad bill that we now learn really does go against Trump’s American first immigration efforts.

Blackburn’sbillmandates a fast track for Syrians, Iraqis and Kurds who claim they were in some way connected, however loosely or remotely, to America’s fight against ISIS. The bill’s language in this regard isvery broadly written.

But Bill Lee and Marsha Blackburn are both undermining President Trump.