As yet another Muslim takes an oath of office on a Quran, many believe it is appropriate, especially if that person is not a Christian.  Taking an oath on a Bible is not a requirement for those duly elected to official positions but stating one’s allegiance to the U.S Constitution is.

In this case in Nashville Tennessee, in November of 2018, an amendment to the Charter of Metropolitan TN, was voted on, and passed. The amendment stated:  Part I, Article III of the Metropolitan Charter shall be amended by inserting into Article III a new subsection 3.08 Oath of Office as follows: “Sec. 3.08. Oath of Office. Each person who shall be elected as a member of council, shall, before entering on the duties of that office, take an oath to support the Constitution of this State, the Constitution of the United States, and the Charter of the Metropolitan Government of Nashville and Davidson County.”

SO why is taking an oath of office on a Quran a problem? According to Islamic law, Muslims must only adhere to, and enforce laws created by Allah. Swearing to uphold man made laws, such as constitutions is a shirk, or major sin. This may be quite the conundrum for Zulfat Suara, a Nigerian Muslim who just placed her hand on a Quran, which is pledging her allegiance to the laws of Islam, not the U.S. 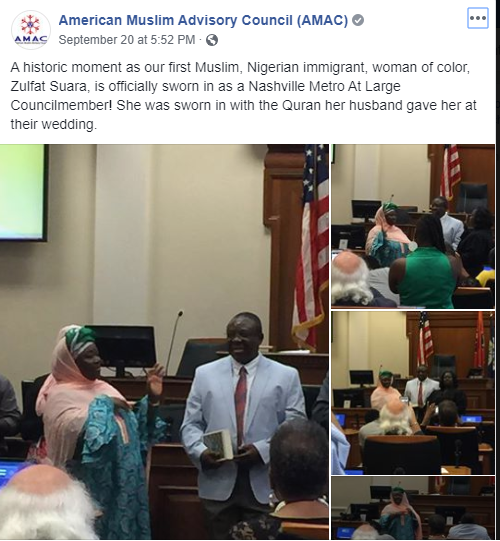 In 2015, Yasir Qadhi, an Islamic scholar and professor from Memphis TN openly supported the American Muslim Advisory Council, (AMAC) the organization Ms. Suara chaired. He also openly declared his dissatisfaction with those who believe in laws made from man. Watch here as Tennessee Muslim Yasir Qadhi chastises those who make laws.

Other Islamic scholars have also written extensively regarding man made law. This is an excerpt from an Islamic question and answer site, which is very clear on the position of following laws not created by Allah.

So the question that needs to be asked of Ms. Suara is Since the Quran declares that only Allah can make laws, Do you support this passage in the Quran or do you support man made laws in defiance of Islamic Law?

We’ll wait for an answer.

1 thought on “Nashville Muslim Takes Oath On Quran..Is She Defying Her Own Beliefs?”