Someone needs to tell the head of the Tennessee State GOP, Mr. Scott Golden, the definition of Bona Fide, according to the American Heritage Dictionary is “Made or carried out in good faith; sincere. Authentic; genuine: In good faith. In business dealings it means without fraud or deception.

According to an article in the On the Hill Tennessee Journal, Previously, the number of required votes was two of the last four. The change was done to “create a consistent standard” for candidates statewide, Golden said, not to make it harder for people to run for office.

“These approved changes were not proposed to prevent people from exercising their right to run for office, but to ensure that primary voters have strong Republicans on the ballot to choose from,” he said in a statement.

Strong Republicans? What a joke!

No where in the current bylaws does any word regarding a candidate’s character, or values matching that of what Republicans are supposed to stand for are mentioned. Why is that? How can the integrity of the Republican party in Tennessee be maintained when its potential candidates are less that authentic or genuine?

The upcoming information on candidates are based on findings from open, factual sources, which helps shed light on the true values of candidates claiming to be “bona fide Republicans”.

Garth Roland Segroves, currently an attorney in Tullahoma TN is running for General Sessions Judge, Part 2. The question should be asked if being a “bona fide Republican” includes running as a Democrat for Tennessee House District 47 in 2006.

Other questions are regarding the donations by Mr. Garth Segroves to Democrat Beto O,Rourke presidential candidate in 2020, Democrat runner for TN Senate Phil Bredesen in 2018, and Democrat Karl Dean for Nashville Mayor also in 2018.

Other donations of note are to Actblue, and a PAC supporting Beto O’Rourke called People Powered Action.

Is this really a “strong” or “bona fide Republican”? If so, the Republican party has lost any semblance of what integrity really is.

The following are other candidates currently running for positions in Coffee County that may meet the criteria to run, but are they true “Bona Fide Republicans”?

SO in future elections, will Mr. Morris vote with the party he proclaims to be a member of or whoever he prefers. In addition, in Mr. Morris’s announcement for his candidacy, he is disingenuous by implying he is currently in this position. “I would be honored to serve the residents of Coffee County as Circuit Court Clerk.  I have had an interest in leading this office since my employment began there in 2010,”

Mr. Morris also ran for Coffee County Trustee in 2014 as a Democrat.

Mr. Burch donated $1000 in 2018 to Phil Bredesen for his senate run against Marsha Blackburn.

Robert Carter, also an attorney in Coffee County running for Circuit Court Judge Part 2 has had his own legal issues in 2011 which involved his being publicly censured by the TN Board of Professional Responsibility 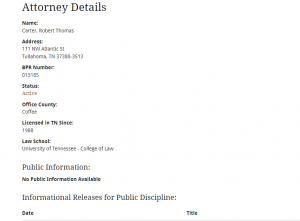 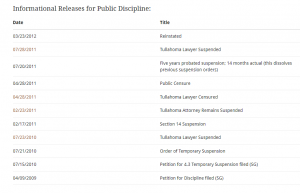 This isn’t a personal attack or as many will respond “no big deal” on those running for political offices in Coffee County, but rather a wake up call. Local elections are the foundation for state and federal  campaigns and can turn a red state blue at any time. If  those running for office have  an agenda other than what the republican party claims to have, it will result in the downfall of conservatism. Doesn’t it matter?

So since the leadership of the Tennessee State GOP doesn’t particularly care how sincere the potential candidates have been, it is up to the voters to know who they’re voting for, not just based on personality but rather on character and the integrity they bring to the true Republican Party.